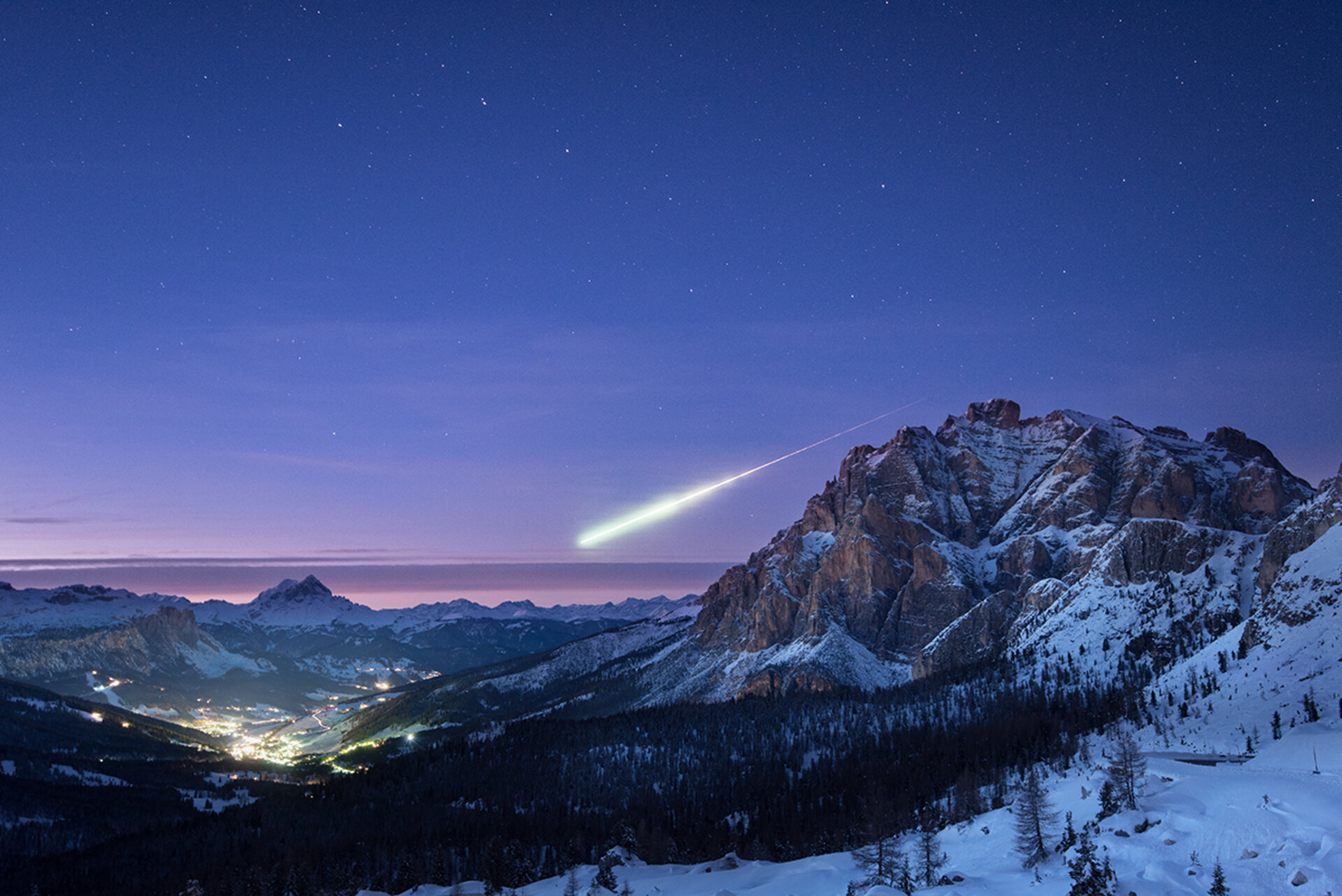 On 14 November 2017 at about 16:45 GMT a football-sized meteoroid entered Earth’s atmosphere about 50 km northeast of Darmstadt, Germany. It created a bright fireball in the sky, which was seen by thousands of people in Germany, France, Switzerland, Austria and Luxembourg, and was reported widely by media.

This remarkable image was taken by Ollie Taylor, a photographer from Dorset, UK, who happened to be on a shoot in Italy, in the Dolomites. The landscape scene shows the village of La Villa, Alta Badia, with Ursa Major seen in the background sky.

At dusk on 14 November, he was setting up for a night landscape shoot at Passo Falzarego, at 2200 m altitude, in clear but chilly –6ºC weather.

Ollie reports: “I was composing a shot of this scene and Ursa Major, seen above the meteor. I wanted to get it at twilight so the sky had a nice pink hue. I just decided I was not getting close enough, and was reaching for my other camera with a longer lens, luckily I left this camera exposing!

“It was a stroke of luck, as it’s given me not only the meteor, but great landscape background, too.”

Small lumps of rock enter our atmosphere every day, but it is rare for one to burn so brightly and to be seen by so many people.

“Owing to the meteoroid’s very high speed, estimated to be at least 70 000 km/h, it super-heated the air molecules in its path as it decelerated, creating a very luminous fireball,” adds Rudiger Jehn, of ESA’s Space Situational Awareness programme.

“Observers reported the meteoroid in detail, which allowed us to estimate its final fate: burning up at an altitude of around 50 km above Luxembourg.”

By yesterday, over 1150 sightings had been submitted to the International Meteor Organization, which runs a website to gather sightings of such events worldwide.

Four other fireballs were reported in France and the US 14–15 November, and the fireball over Luxembourg could be linked to the Taurid Meteor Shower , according to the organisation.

ESA supports the global effort to spot natural objects such as asteroids – much larger than this object – that can potentially strike Earth and cause damage. Access more information on the Space Situational Awareness programme via http://www.esa.int/ssa_neo.

Additional video footage of this event