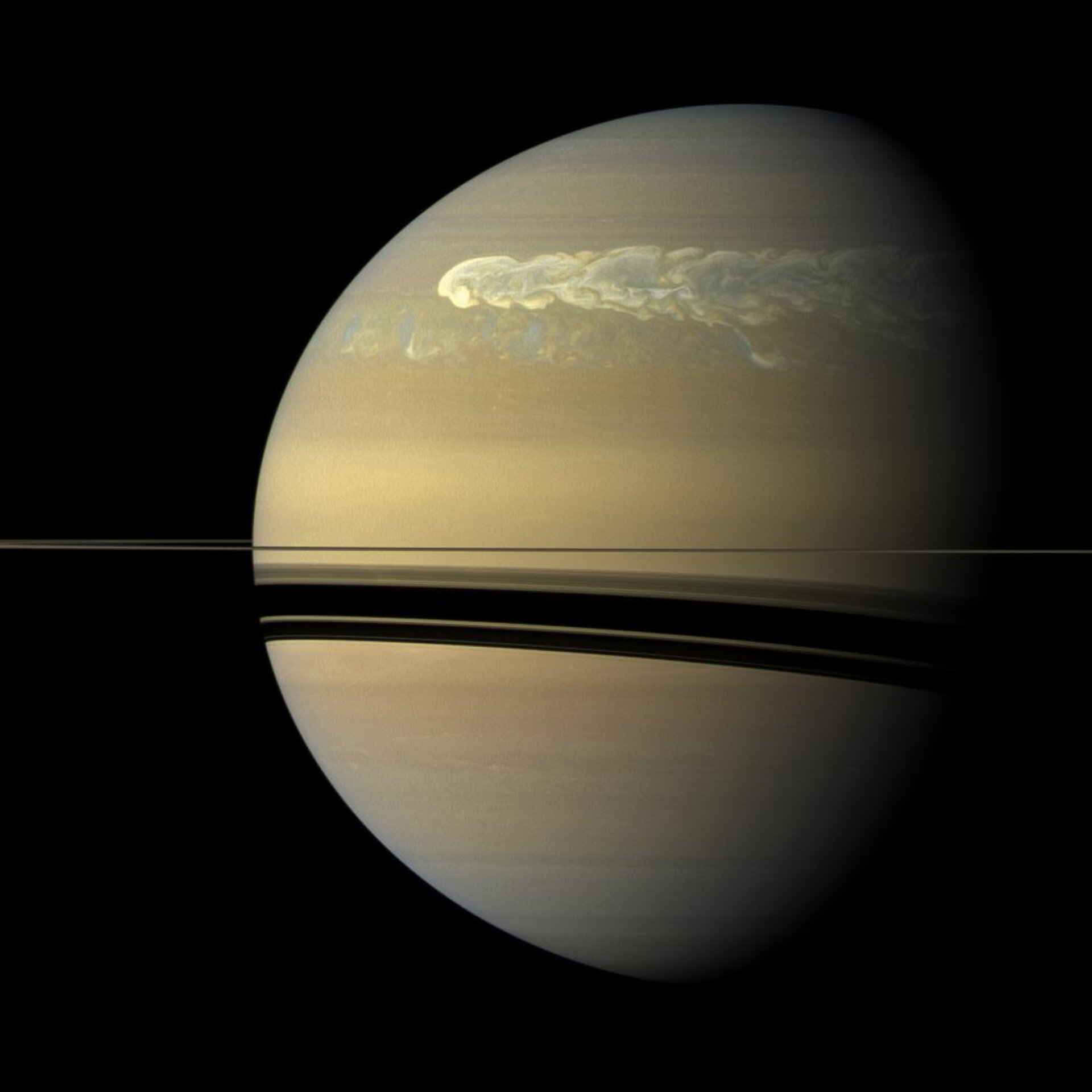 Saturn’s storm are sights to behold. Unlike other planets in the Solar System, the ringed planet seems to store up huge amounts of energy over multiple Earth decades and then release it all at once in the form of a swirling and chaotic lightning storm.

Scientists are unsure why and how the planet behaves this way, but these massive storms occur roughly once every Saturnian year – or once every 30 Earth years – and are known as Great White Spots.

The Great White Spot pictured here, also named the Great Northern Storm, was the largest and most intense storm that the international Cassini mission ever observed on Saturn. It began in late 2010 and lasted for months, but affected the clouds, temperatures and composition of the atmosphere for more than three years.

This true-colour view from Cassini was taken on 25 February 2011, roughly 12 weeks after the storm began, and shows the turbulent patterns within the storm. There appear to be two bands of storm, one further north and brighter than the other. In fact, the storm has thundered its way around the planet and caught up with itself. Some of the cloud south and west of the storm head can be seen tinged blue as it interacts with other currents in the atmosphere, while the storm head swirls with white and yellow as it heads westward to overtake its subtler tail.

It was a lucky coincidence that Cassini happened to be orbiting Saturn during the storm, offering an unprecedented opportunity to study the gas giant’s turbulent weather and climate patterns. Recently, Cassini found this storm to have been so immense and powerful that it was able to disturb the atmosphere at the planet’s equator some tens of thousands of kilometres away.

This disruption of the long-term, cyclical, continuing atmospheric patterns at mid-latitudes (dubbed informally by some as the planet’s ‘heartbeat’), is thought to be due ‘teleconnection’, which we also observe on Earth – when distant events within a climate system are somehow connected and can influence one another significantly.

This image combines red, green and blue filtered images from Cassini’s wide-angle camera to create a real-colour view. These images were taken at a distance of 2.2 million km from Saturn looking towards the sunlit side of the rings from just above the ring plane, and have a scale of 129 km per pixel.

The Cassini mission is a cooperative project of NASA, ESA and Italy’s ASI space agency. After 13 years of pioneering observations, Cassini ended its mission in spectacular fashion on 15 September 2017, plunging through the planet’s inner rings and atmosphere and breaking contact forever.