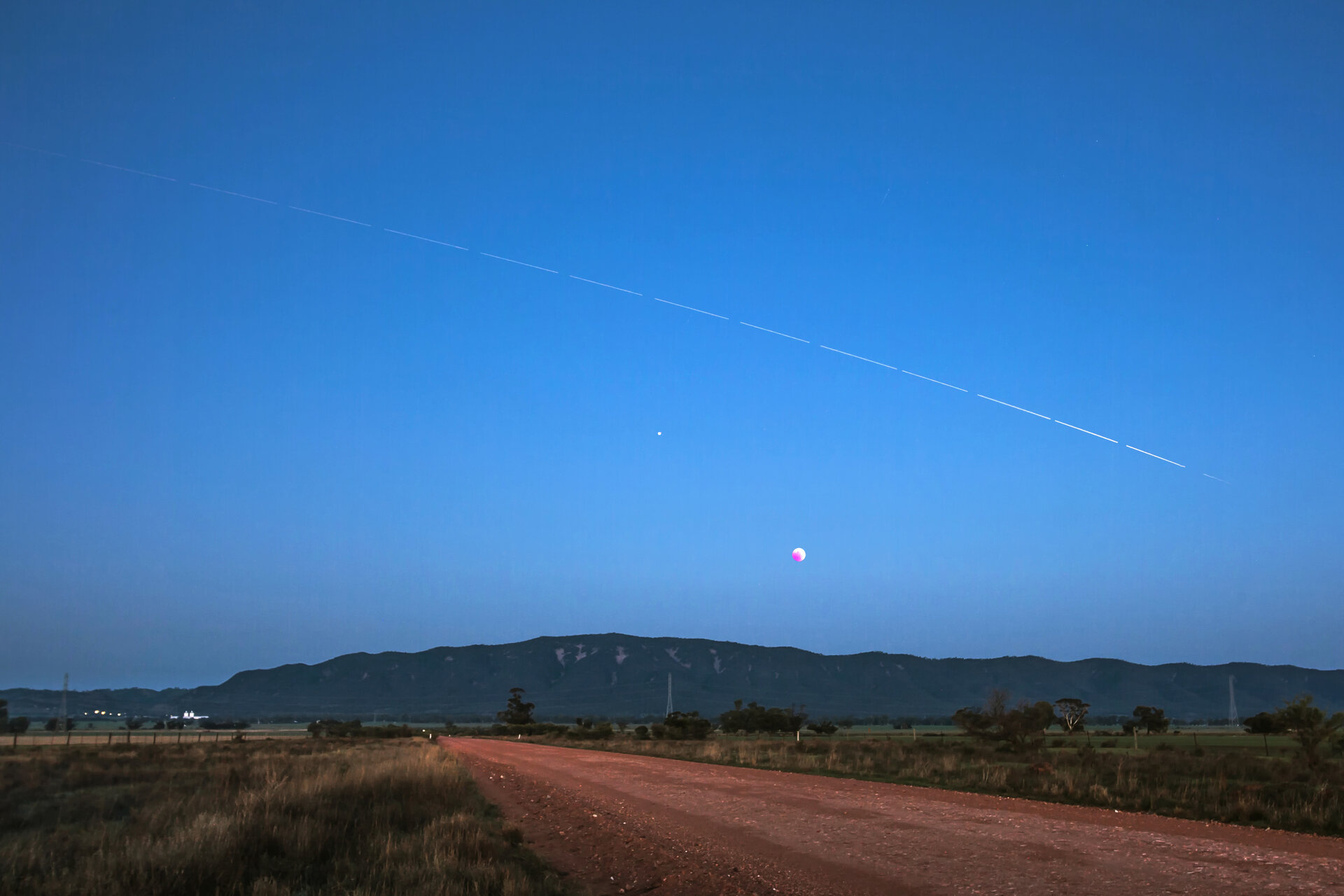 ESA’s strategy for human and robotic exploration is using the International Space Station as a platform for out-of-this-world research and as a proving ground for space technology. Meanwhile we are heading towards the Moon with a lunar gateway and the Orion spacecraft in collaboration with partner space agencies. And looking even farther afield we are set to search for life on Mars with the ExoMars rover and even exploring concepts to bring back martian soil with partner agencies.

These three destinations are seen together in this image, taken near Mount Remarkable National Park about 250 km north of Adelaide, Australia.

Due to how Earth and Mars orbit the Sun, their distance and position in the sky changes over time. Mars will be at its closest to Earth tonight since 2003.

Last week, a total lunar eclipse occurred when Earth moved in between the Sun and the Moon, creating a reddish hue on the lunar surface as sunlight passed through the Earth’s atmosphere – the same phenomenon that causes sunsets on Earth to appear reddish in colour.

The International Space Station circles Earth every 90 minutes, so looking up at the right time and place allows for some beautiful pictures of the three orbiting objects – like this one captured by Andrew Wall.

Andrew recounts: “I had the idea of having Mount Remarkable in an image with the eclipsed moon but it was not until about a day or so before the eclipse that I found out that the Space Station would be passing by, just above the Moon and Mars at 06:40 local time – a great opportunity to get them all together.”

On 28 July 2018, which happens to be Andrew’s birthday, he got lucky despite some problems with the camera lens: “I had set up my telescope with an 8" f4 Newtonian on an Equatorial Mount, by the side of the road, and was busily taking photographs of the lunar eclipse. Just before the Space Station came into view I set up my second camera, a Canon 400D with a wide field lens to capture the pass. I moved the camera 100 m down the road and started taking exposures. Since it was cold, dew started forming on the lens, but I did not notice immediately as I was busy with the telescope.

“Seconds before clearing the lens with my jumper, the Space Station came into view, so it was a rush to focus and start taking images. I took a series of exposures only a few seconds long since the sky was already getting brighter. It was over as quickly as it began, as the Station continued on its journey.”

The images were post-processed by masking the stars, Moon and Mars and using the first frame of the Space Station pass as a reference. The Moon is taken at exactly the same time from the telescope camera and carefully aligned to the same size and location as the Moon in the other image. The scale and position is exactly the same but the images are stacked for better focus and effect.

ESA challenged photographers to take an image of the Moon, Mars and the International Space Station with bonus points given if it included Friday’s eclipsed Moon. The winners will be contacted soon.