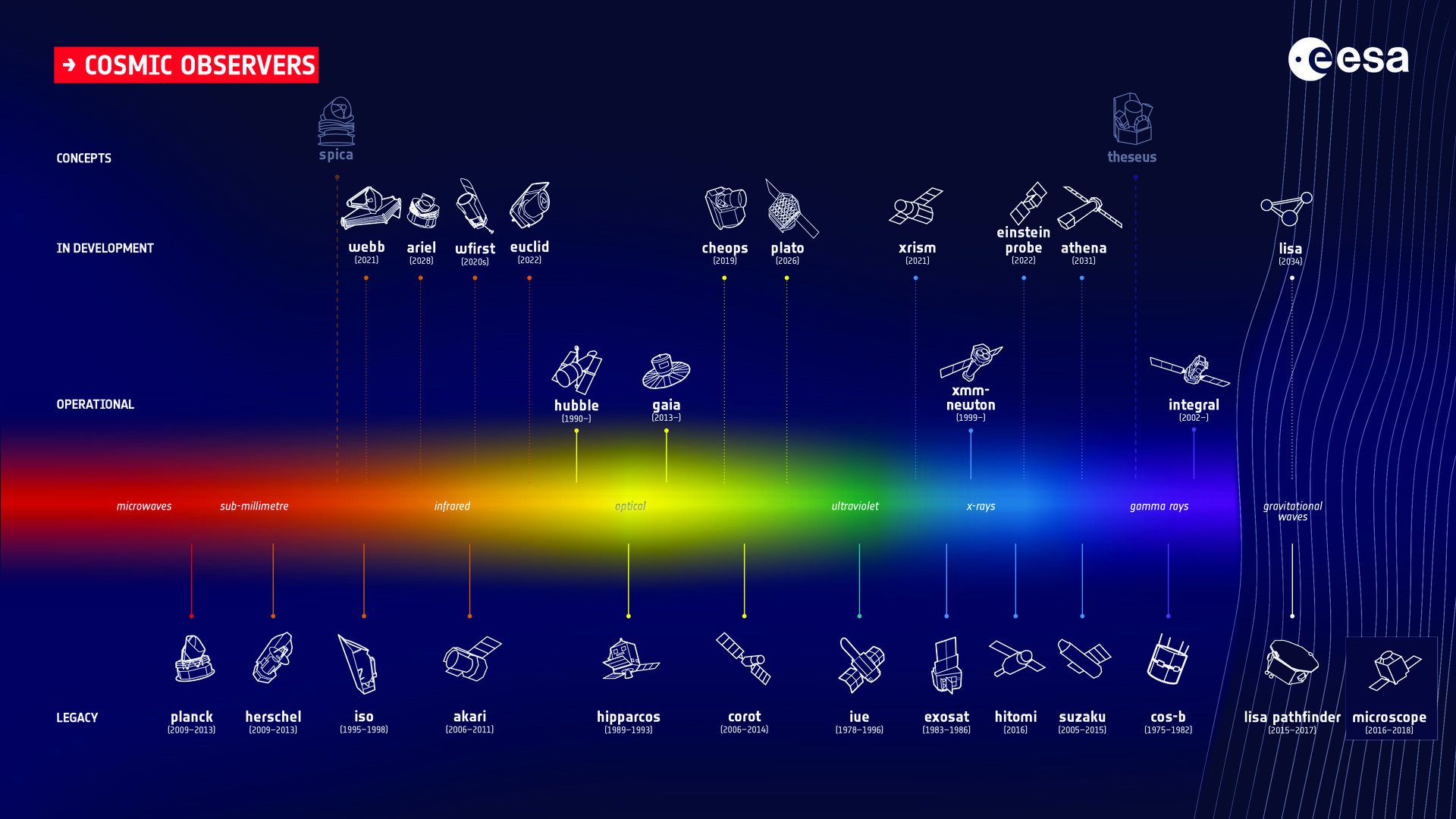 With a fleet of astronomy missions observing the Universe across the electromagnetic spectrum – from microwaves to gamma rays – ESA has been at the forefront of astronomy for decades. These missions enable astronomers to tackle big questions such as the origin and evolution of our Universe, from its early beginnings to the stars and galaxies we observe today, and the fundamental laws that govern the cosmos.

As cosmic sources shine brightly in one or more portions of the spectrum, our missions have been probing a wide range of processes in the Universe – from plan­ets in our Solar System to exoplanets orbiting other stars; from the life cycle of stars to their motions through our Galaxy and beyond; from black holes and active galaxies all the way back to the relic radiation of the big bang.

The future of astronomy takes us into the realm of multimessenger astronomy, where observations across the electromagnetic spectrum are combined with the detection of gravitational waves, bringing the sound to the cosmic movies.

The successes of our earlier missions form part of ESA's science and technology legacy, feeding into the next generation of cosmic observers. Even missions that have completed their in-flight operations still yield new scientific discoveries decades after, thanks to their vast data archives available to researchers worldwide.

The graphic showcases the current state of ESA’s astronomy missions, including collaborative missions with partner agencies (e.g. the NASA/ESA Hubble Space Telescope and the NASA/ESA/CSA James Webb Space Telescope), upcoming missions of opportunity  (e.g. the JAXA/NASA Xrism and the Chinese-led Einstein Probe) and concepts for future missions (e.g. the two candidate missions Spica and Theseus). For a complete breakdown of the various ‘class’ of missions, see our mission navigator.
This portfolio of past, present and future missions shows the importance of long-term planning to realise the missions that investigate fundamental science questions, and to ensure the continued development of innovative technology, inspiring new generations of European scientists and engineers. For example, the billion star surveyor Gaia, was conceived in the 1990s, stemming from the success of its predecessor Hipparcos. What do we want to observe in twenty or thirty years time?

In the graphic, date ranges refer to launch and completion of in-flight operations. For future missions the foreseen launch date is indicated (as of February 2019).

ESA also has a fleet of space science missions exploring the Solar System. Discover them here.