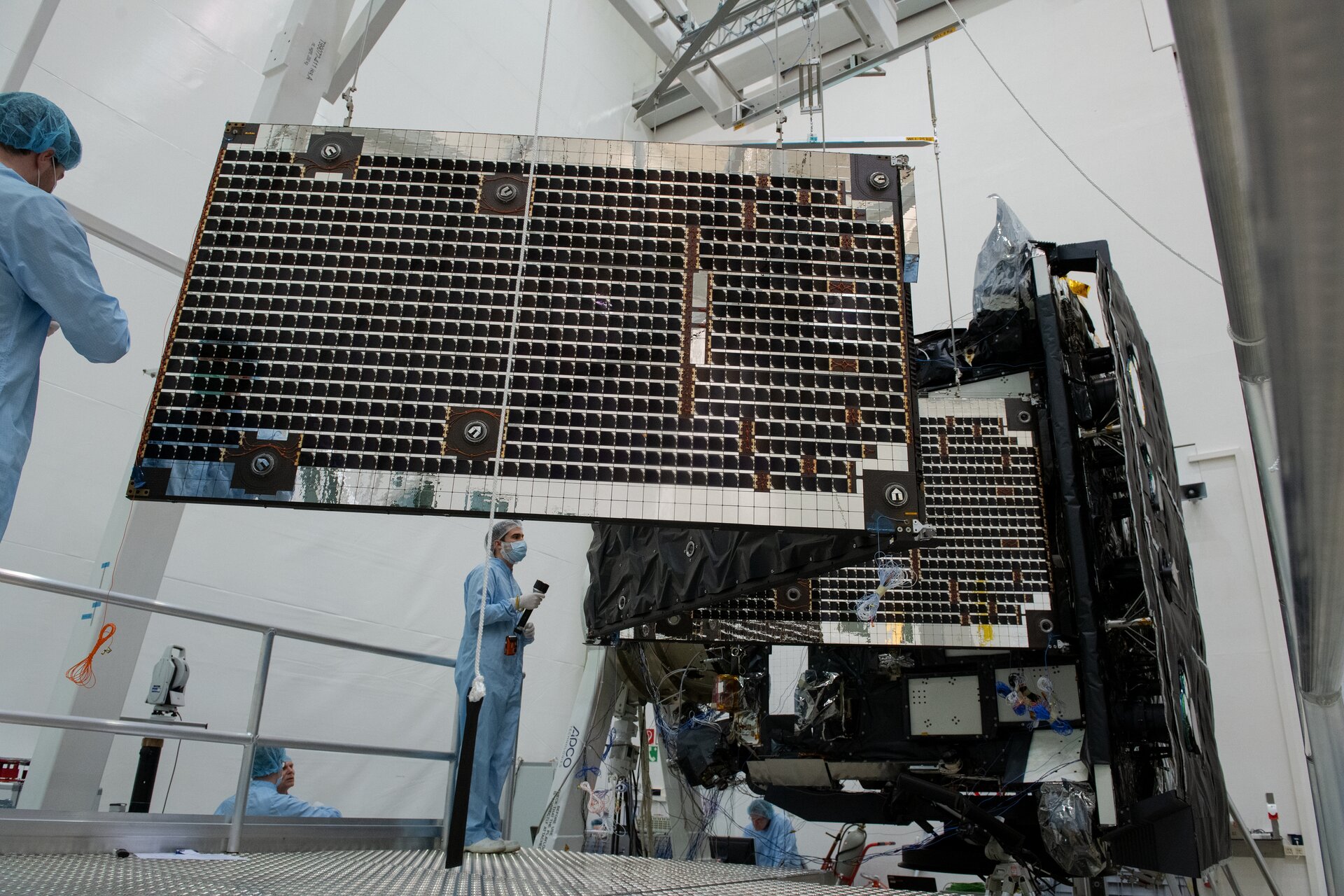 ESA’s Solar Orbiter mission is being put through its paces to prepare it for facing the Sun following launch in February 2020.

The spacecraft is being tested to withstand the vibrations of launch, the vacuum of space, and the extreme temperature ranges and magnetic environment that it will experience as it journeys from Earth to within the orbit of the innermost planet, Mercury. The deployment mechanisms of instrument booms, antennas and solar arrays are also checked out.

This image captures the scene part way through a solar array deployment test at the IABG facilities in Ottobrunn, Germany, earlier this year. Fully extended, the tip of the array stretches 8.2 m from the spacecraft body. The panels are suspended from above to simulate the weightlessness of space. Click here to watch a video of the full deployment test.

The solar arrays have to provide the required power throughout the mission over a wide range of distances from the Sun. Close to the Sun, the spacecraft will endure around 13 times the amount of solar heating that Earth-orbiting satellites experience, with temperatures in excess of 500ºC, so the solar arrays can also be rotated to avoid overheating when closest to the Sun.

Solar Orbiter's mission is to provide new views of our star, in particular providing the first close-up observations of the Sun’s poles. Its unique orbit will allow scientists to study the Sun and its outer atmosphere, the ‘corona’, in much more detail than previously possible.

We cannot usually see the corona because it is overwhelmed by the bright light of the Sun’s surface itself. During a total eclipse however, when the Moon passes between Earth and the Sun, that light is blocked, revealing the beautiful white glowing corona around the Sun, its structures shaped by the Sun’s magnetic field. This rare sight will be much sought after by astronomers in parts of South America on 2 July, who are getting ready to watch a total solar eclipse.

We essentially live in the extended atmosphere of the Sun. The corona continuously expands and spreads into space, developing as the solar wind that interacts with the planets and beyond, sometimes leading to aurora and other space weather effects observed at Earth.

Solar Orbiter will measure the solar wind and magnetic fields in the vicinity of the spacecraft while simultaneously taking high-resolution images of features on the Sun, linking the two together. This will give us unprecedented insight into how the Sun creates and controls its dynamic atmosphere, and how it interacts with the planets. Studying the Sun-Earth connection is fundamentally important to understanding how our Solar System works in its entirety.

In addition to delivering ground-breaking science in its own right, Solar Orbiter also has important synergies with NASA’s Parker Solar Probe. Coordinated observations will contribute greatly to our understanding of the Sun and its environment.

Solar Orbiter is an ESA-led mission with strong NASA participation. The prime contractor is Airbus Defence and Space. The spacecraft is scheduled for launch from Cape Canaveral in February 2020.