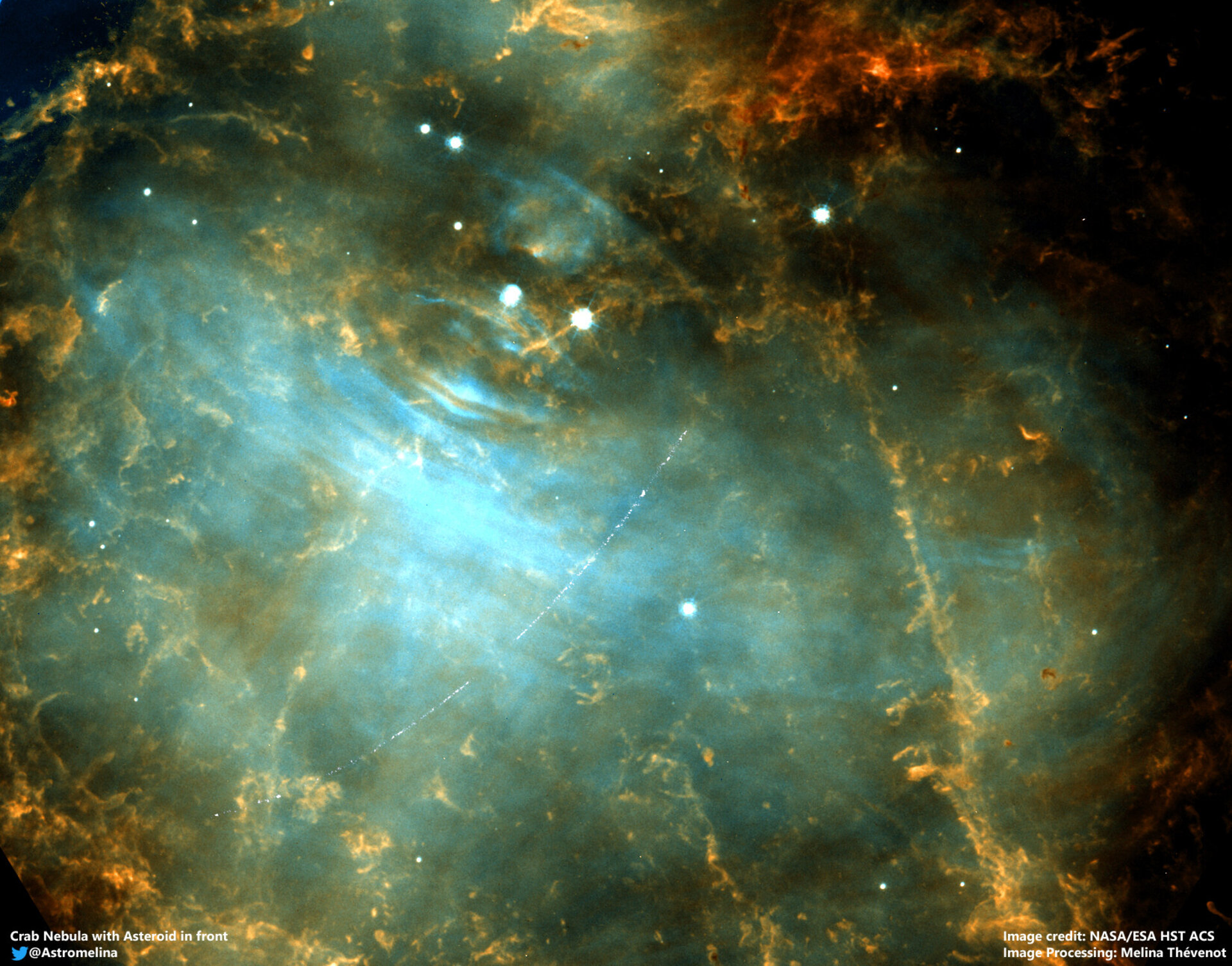 When astronomers use the NASA/ESA Hubble Space Telescope to study the deep sky, asteroids from our Solar System can leave their marks on the captured pictures of far-away galaxies or nebulae. But rather than be annoyed at the imprinted trails in Hubble images, astronomers realised they could use them to find out more about the asteroids themselves.

To do this, a team of ESA astronomers and software engineers started the Hubble Asteroid Hunter citizen science project in June, enlisting the public to help them find asteroid trails observed by chance in Hubble archival images. Through this project, over 1900 volunteers have made more than 300 000 classifications in nearly 11 000 images in only 1.5 months, completing the project with swiftness and enthusiasm that exceeded the team’s expectations.

Astronomy-enthusiast Melina Thévenot from Germany was one of the project’s keen volunteers. While analysing Hubble data, she found an asteroid trail on the foreground of a 2005 image of the Crab Nebula, one of the night sky's most famous objects.

Inspired by this impressive combination, Melina decided to process the original Hubble image combining views taken in blue, green and red filters, to create the stunning colour scene portrayed here. The faint trail of 2001 SE101, a main-belt asteroid discovered by the ground-based LINEAR survey in 2001, appears as a curved streak that crosses the image from bottom left to top right, near the nebula’s centre.

The Crab Nebula, also known as Messier 1 or M1, was the first object recorded by French astronomer Charles Messier in his famous catalogue of deep-sky objects. It is the expanding remnant of a bright supernova explosion observed by astronomers in 1054. Aside from the swirling cloud of gas and dust, the explosion left behind a rapidly rotating neutron star at the centre of the nebula, also visible in this image as the leftmost star in the bright pair at the centre of the picture.

While the chance alignment of a relatively nearby object – the asteroid – with the distant nebula is fascinating, it is not completely unexpected. In fact, the Crab Nebula, which has been observed by Hubble on nearly 300 occasions, fortuitously lies close to the ecliptic – the orbital plane where most asteroids reside in the Solar System – so it was only a matter of time before one of them ‘photobombed’ an observation of this iconic supernova remnant.

Now that volunteers have perused the platform to spot and mark asteroid trails, it is astronomers’ turn to get to work. Knowing the date and time when the Hubble images were taken, they can use the trails marked in the pictures to infer asteroids’ positions and velocities. This means they can determine the orbits and future trajectories of known and previously unknown asteroids with greater precision than before.

This knowledge is especially important for near-Earth objects: precisely determining the orbits of these asteroids can help protect our planet from possible impacts.

Meanwhile, the ESA team is planning to add new data to the Hubble Asteroid Hunter project soon, so users will have another chance to inspect Hubble images in search of passing asteroids. Stay tuned!

This stunning scene and the Hubble Asteroid Hunter project were made possible thanks to Zooniverse, the world’s largest citizen-science platform. The project was initiated by ESA research fellow Sandor Kruk, graduate student Max Mahlke, software engineers Elena Racero and Fabrizio Giordano from the ESAC Science Data Centre (ESDC) near Madrid, Spain, and Bruno Merín, head of the ESDC.