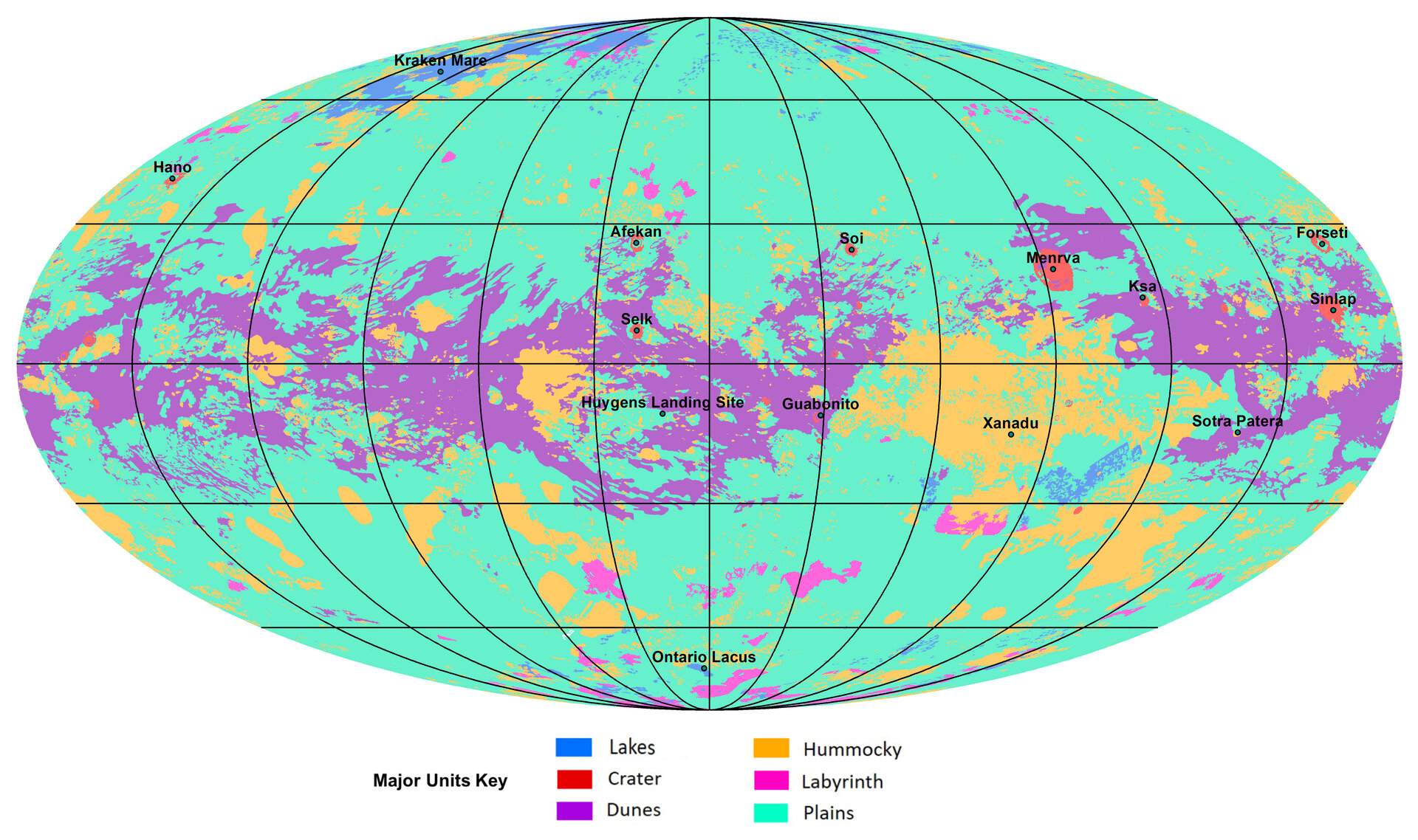 The first map of the global geology of Saturn's largest moon, Titan, has been completed, revealing a dynamic world with dunes, lakes, plains, craters and other terrains. The map is based on data from the international Cassini mission, which performed more than 120 flybys of Titan during its time at the Saturn system, between 2004 and 2017.

With a size comparable to that of Mercury, this moon is the only planetary body in our Solar System – besides Earth – known to have stable liquid on its surface. But instead of water raining down from clouds and filling lakes and seas as on Earth, what rains down on Titan and fills its liquid pools is methane and ethane.

This hydrocarbon-based hydrologic cycle has been shaping Titan’s complex geologic landscape, giving rise to the variety of terrains shown in this map. These include plains, which are broad, relatively flat regions (shown in pale green), labyrinths, which refer to tectonically disrupted regions often containing fluvial channels (shown in pink), hummocky, corresponding to hilly terrains, featuring some mountains (shown in pale orange), dunes, which are mostly linear and produced by winds on Titan's surface (shown in purple), impact craters (shown in red), and lakes, currently or previously filled with liquid methane or ethane (shown in blue).

As evident in the map, different geologic terrains have a clear distribution with latitude, with dunes being most prominent around the equator, plains at mid-latitudes and labyrinth terrains and lakes towards the poles. The names of several surface features are indicated on this version of the map, along with the landing site of ESA’s Huygens probe, which landed on Titan on 14 January 2005 as part of the Cassini mission. A non annotated version is available here.

To compile this map, scientists relied on a combination of radar, visual, and infrared data gathered by Cassini, in order to penetrate Titan’s thick and hazy atmosphere and identify surface features. The study, led by Rosaly Lopes of NASA's Jet Propulsion Laboratory and also involving ESA research fellow Anezina Solomonidou, enabled the scientists to estimate the relative age of different geological units, indicating that dunes and lakes are relatively young, whereas the hummocky or mountainous terrains are the oldest on Titan. The results were recently published in Nature Astronomy.