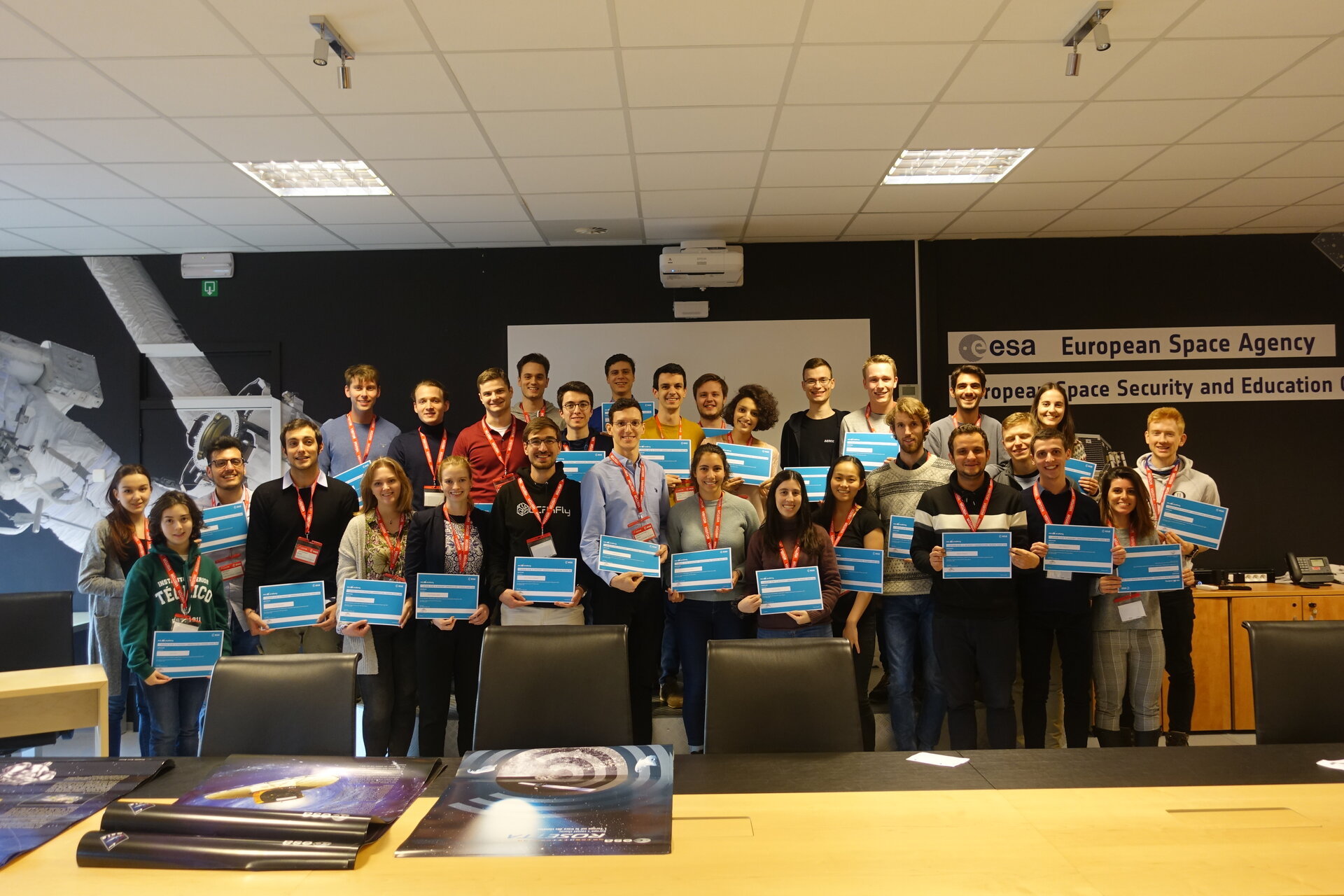 30 Bachelor, Master and PhD students from 11 different ESA Member and Canada have successfully completed the fifth edition of ESA Academy’s Ladybird Guide to Spacecraft Communications Training Course. Taking place between 18 – 21 February 2020, and hosted at ESA Academy’s Training and Learning Centre, ESEC-Galaxia in Belgium, the course was delivered by a senior ESA engineer from the Operations Department of ESOC.

Also attending were 20 students who were unable to be present in person, but rather participated via Livestream. Explained one of these, a Spanish student from ISAE-SUPAERO, "this course has been not only a hugely educational experience with the impressively good trainer, but also a really interesting and challenging one that has allowed me to meet some truly interesting people. The fact that the course was livestreamed did not detract at all from its usefulness or my enjoyment of it, and one can only hope to be involved in similar activities in the future."

The course’s objective was to familiarise students with the fundamental concepts that lie at the heart of spacecraft communications. The “Ladybird approach” was taken, meaning that lectures took an overview of topics rather than getting lost in details, with mathematical and analytical perspectives kept to a minimum. The course was peppered with easily understandable examples and accessible diagrams. A secondary objective was to “fill the gap” between spacecraft operators and telecommunications designers. Often designers have difficulty considering the operators’ points of view, which is a challenge that needs to be addressed when designing a ground station or telecommunications subsystem of a spacecraft.

The trainer has many years of experience with spacecraft operations, and was able to supply ample real-life examples of spacecraft missions and operational scenarios, bringing students close to the actual problems that may be encountered. During lectures the participants were challenged with quizzes, putting themselves into the position of operators facing mission communication problems, and inviting them to devise solutions!

The pressure was then turned up as the students were tasked with a group exercise to put theory into practise. They were divided into three teams, which after careful consideration they named Atlas, Sagittarius, and Omega. These teams each had to produce a “Ladybird Design” of the communications system for a fictional mission. On the final day, they had to operate their spacecraft during a simulated communications scenario. Eight online students formed a fourth team in order to complete the exercise. With some tips from the trainer along the way, all teams performed well in the simulation, ably demonstrating the knowledge they had gained in just a few days!

In addition to the lectures and group exercise, the on-site students enjoyed a visit to ESEC-Redu with three Operations Engineers. Beginning with introductions about the site and information about the PROBA and GALILEO satellite programmes, the keen attendees continued on to visit the PROBA Operations Room to gain insight into how ESEC-Redu communicates with these satellites. They also explored the Baseband Equipment Room, as well as inside the Redu 1 Antenna (boasting a 15-metre diameter dish). During the visit, the students asked questions direct to the satellite and ground station engineers that work in ESEC-Redu, complementing their training by learning from real-life experiences.

“This training course was amazing!” concluded a Portuguese student from Instituto Superior Técnico, participating online. “We had the opportunity to learn a lot of things about spacecraft communication as well as get to know about some of the problems that occurred in the past. This was really insightful and was also one of the main reasons why this course was so engaging! Although the course could be a little demanding at times, since we were learning so many things in so short time, the fact that everyone who participated in the livestream was so enthusiastic and always ready to help each other made me feel really motivated. I would say this was a stupendous opportunity and I am really happy I was able to take part in it.”