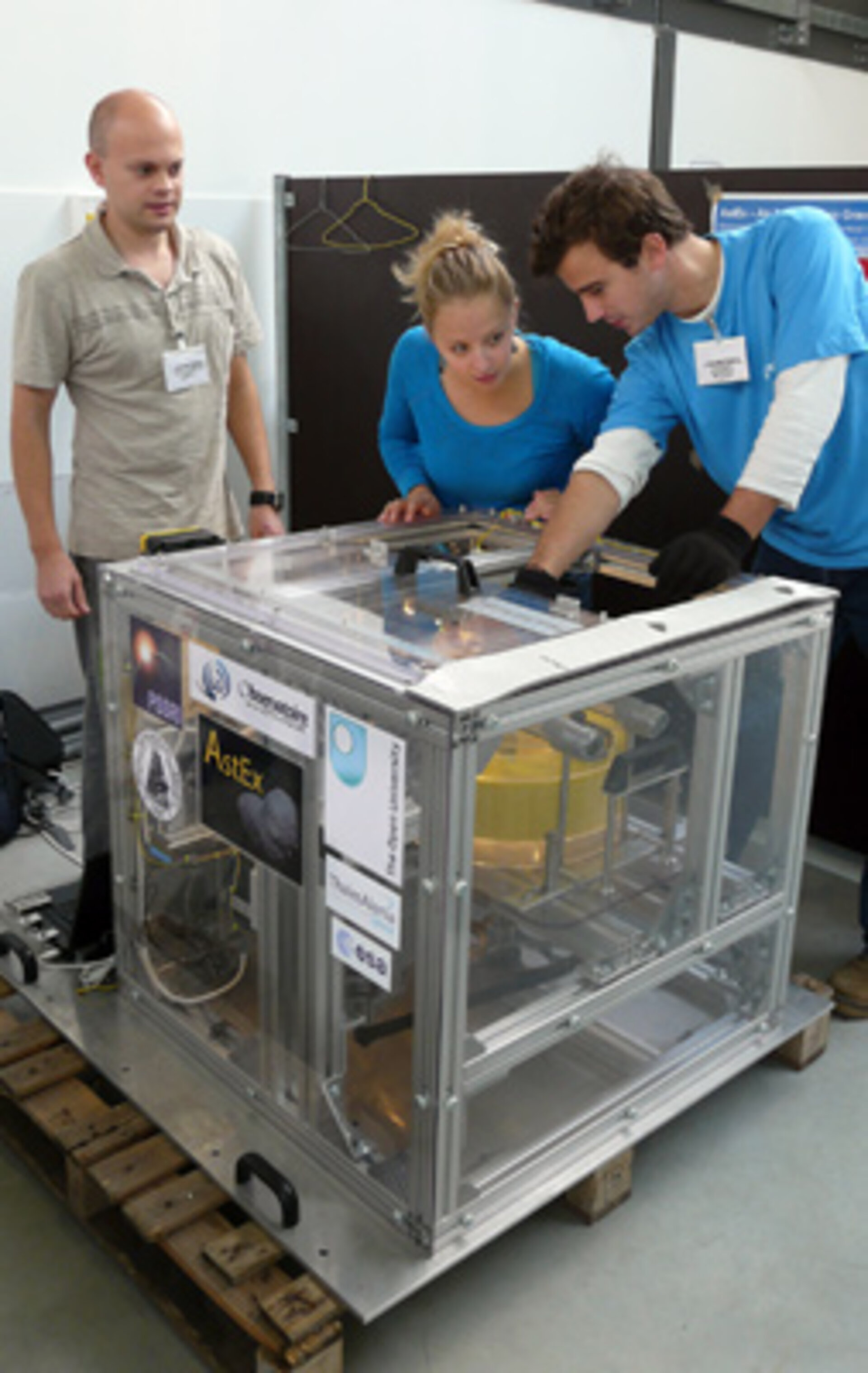 A Fly Your Thesis! experiment has explained how gravel and rocks behave on the surface of an asteroid. The results will be useful in explaining asteroid geology, interpreting images of asteroid surfaces and designing future asteroid lander missions.

Asteroids are rising quickly up the scientific agenda. They hold information about the origin of the solar system, and they contain molecules that could tell us about the origin of life on Earth. Occasionally they can also present a danger to Earth by threatening to collide with our planet.

To unlock their secrets, many scientists would like to collect samples from the surfaces of nearby asteroids for analysis. But in the microgravity of the asteroid’s surface, how do the gravel and small rocks, known as regolith, behave?

This is the question that the AstEx team investigated during the 2009 ESA’s Fly Your Thesis! Programme, co-ordinated by ESA’s Education Office. The team was composed of students from The Open University, United Kingdom, and the University of Nice-Sophia Antipolis, France.

In results published recently in Physical Review Letters and in Monthly Notices of the Royal Astronomical Society, the students reported finding both similarities and differences in the way granular material behaves in microgravity compared with Earth’s gravity.

Almost a million glass beads with diameters of three or four millimetres were loaded into the experiment. They were placed between two cylinders and the inner cylinder was set rotating. This created a shearing force, agitating the beads. Two cameras recorded the subsequent movement for later analysis.

The experiment was first run on the ground under ordinary gravity conditions. Then it was loaded into the Airbus A300 Zero-G, operated and maintained by Novespace from Bordeaux, France.

The aircraft flies particular looping manoeuvres that generate microgravity conditions for around 20 seconds at a time. The AstEx students got the unique opportunity to experience weightlessness and operate their experiment during 90 microgravity periods.

As the beads rub against one another, they set up force chains. These are the critical supporting connections in a collection of granular material. On a larger scale, it is like having a pile of oranges. Some can be removed without the pile collapsing, while others trigger an avalanche. Those that cause a collapse are the weight-bearing oranges, said to be part of a force chain.

The popular game of Jenga is also based upon force chains. Players carefully remove wooden blocks from a tower, hoping that the tower remains upright. If they choose a block that forms part of a force chain, however, the tower will fall.

In regolith, such force chains are more complex. They will be set up by a spacecraft landing or by equipment trying to dig into the surface. Hence, the behaviour of the regolith under different gravity regimes is essential to know when designing such missions.

The team found a surprising result.

’When we analysed the images afterwards, we saw no difference in the main flow of the grains under different gravity conditions in response to a shear force,’ says Naomi Murdoch, who was studying for a PhD at University of Nice-Sophia Antipolis, France, at the time of the experiment.

The students did, however, see a major difference in a secondary type of movement called granular convection. Certain types of granular convection are common to us all. They occur when smaller grains drop to the bottom of a mixture during agitation. This is what causes breakfast cereals to settle in their packets during transportation.

It can also occur as a distinct motion within grains of the same size. The team found that such granular convection did not happen in microgravity, indicating that gravity is an important factor.

The results will help in the design of efficient anchors and sub-surface sampling mechanisms on asteroid missions, or of any device aimed at interacting with the surface of regolith-covered bodies, including the Moon and Mars.

Most usefully, however, the results will help astronomers understand more about asteroid geology and what processes take place on an asteroid.