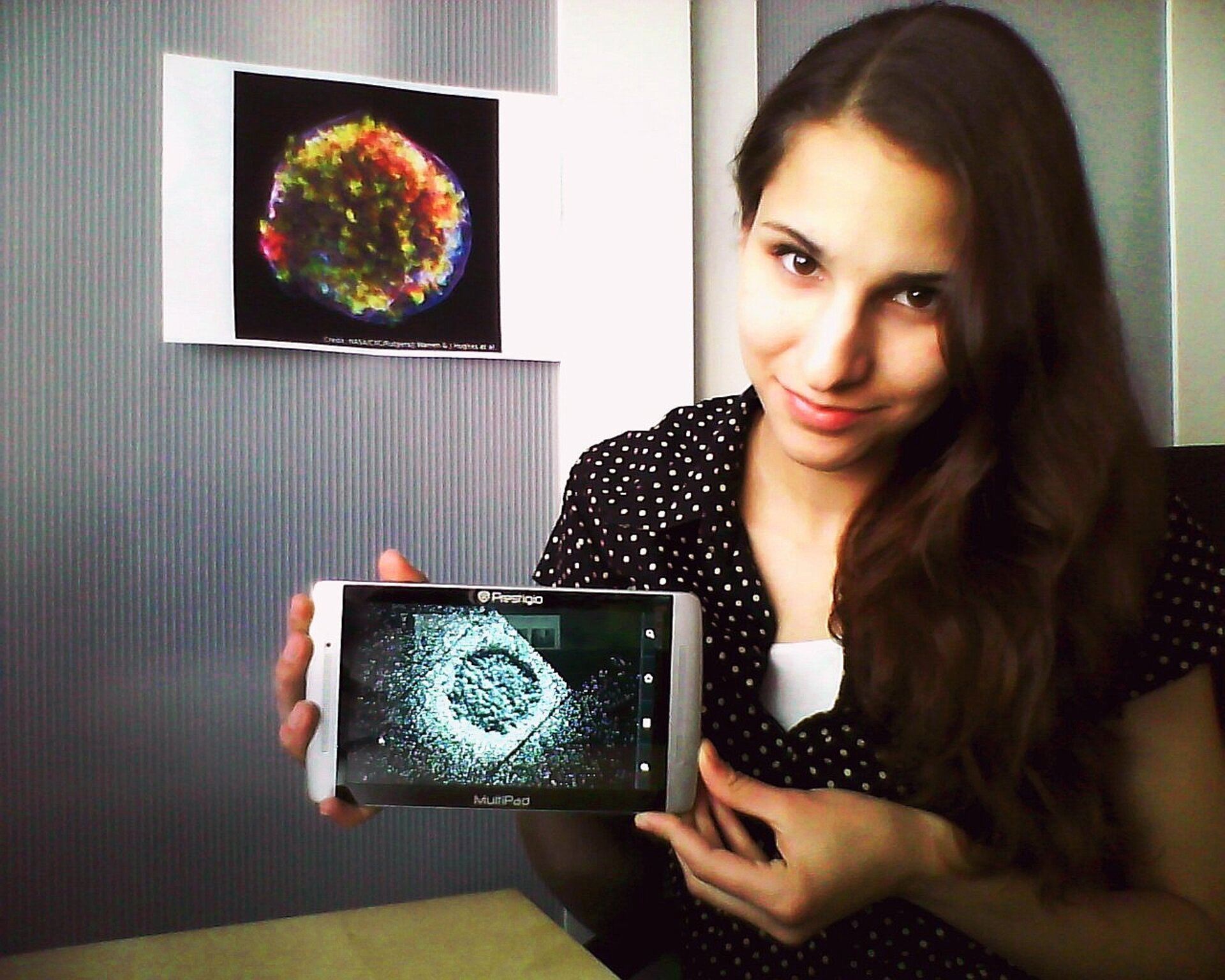 In 1572, the great Danish astronomer Tycho Brahe, saw a star explode in the heavens. It changed his view of the universe forever. Now, the remains of that explosion seen by ESA’s XMM-Newton space telescope has done the same for a 16-year-old school student from Slovakia.

Even today, more than 400 years after the explosion was first seen from Earth, Tycho’s Supernova Remnant continues to expand. Michaela Brchnelova, from Bratislava, used X-ray observations from XMM-Newton to study the rate at which the debris was moving.

Her aim was to investigate whether collisions with interstellar gas clouds were slowing down the explosion debris. Some scientists believed they saw evidence for a collision to the north-east. Observations from XMM-Newton could determine this because collisions generate X-rays.

Michaela’s work was so successful that she won a trip to the Intel International Science and Engineering Fair held during May in Arizona, USA. There, she was awarded the second prize of the Astronomical Society of the Pacific and the American Astronomical Society.

How did you get to know about ESA and XMM-Newton?

My friend and adult sponsor Mgr. Matúš Kocka told me about the possibility of working with the raw data from XMM-Newton during an astronomy camp last summer. I was looking for a project and he had been doing supernova remnant research for his PhD so he recommended this topic.

How easy was it to work with the online data?

It was my biggest challenge in the beginning; I had never done anything like it before. However there are very comprehensive threads on the XMM-Newton website, so after only about two weeks of studying the instructions I managed to create my first false-colour images and other scientific products.

Using the raw data I could create my own images and spectra so I could do research that had not been done before. This is a brilliant motivation for any high-school student; we are normally only learning about other people’s work.

What conclusions did you draw from the data?

My results support the theory that there is an interaction to the north-east of the Tycho Supernova Remnant. I calculated the remnant’s expansion from observations taken in 2005 and 2009, and found some southern areas are expanding more than 4 times faster than those in the north-east. This suggests a collision is slowing down the expansion in the north-east. I then focused on the X-ray brightness changes and discovered that while the north-east has grown about 1.5 times brighter over the time, which is consistent with a collision taking place, there has been a decrease in the X-ray brightness on the other sides, suggesting no collision.

What else did you learn from the project?

I now understand how all this equipment works. This is a valuable lesson for anyone used to getting a beautiful image just by pushing a camera button. As a result of working with the data I now know much more about, for example, the mechanics of CCD photon detection, and the generation of images and spectra.

It also widened my knowledge of physics because to fit the spectra to make the flux calculation, I had to use proper physical models. There are many to choose from and each one is different so I had to study the background physics of supernova remnants until I could find and combine suitable ones and adjust the relevant parameters.

Would you recommend other school pupils work with real data?

I have already! Two of my classmates were so inspired they persuaded me to work with them on another project. This included Hubble Space Telescope data and when we took it to the European Odysseus competition, we won.

Despite not being interested in astronomy or physics before, during the research they became dedicated. They felt like ‘real scientists’ while they were processing the real scientific data.

Do you hope for a career in the sciences?

From early childhood I have wished for a career in physics. Having done this project, I have become particularly keen on high-energy astrophysics. So, I will strive to gain a place at a great university and then find a job in this field.

XMM-Newton is the European Space Agency’s orbiting X-ray observatory. It is part of a series of ESA science missions studying the Universe at various wavelengths across the electromagnetic spectrum. Students of all ages can challenge themselves to work with real data at the XMM-Newton Science Archive (XSA).