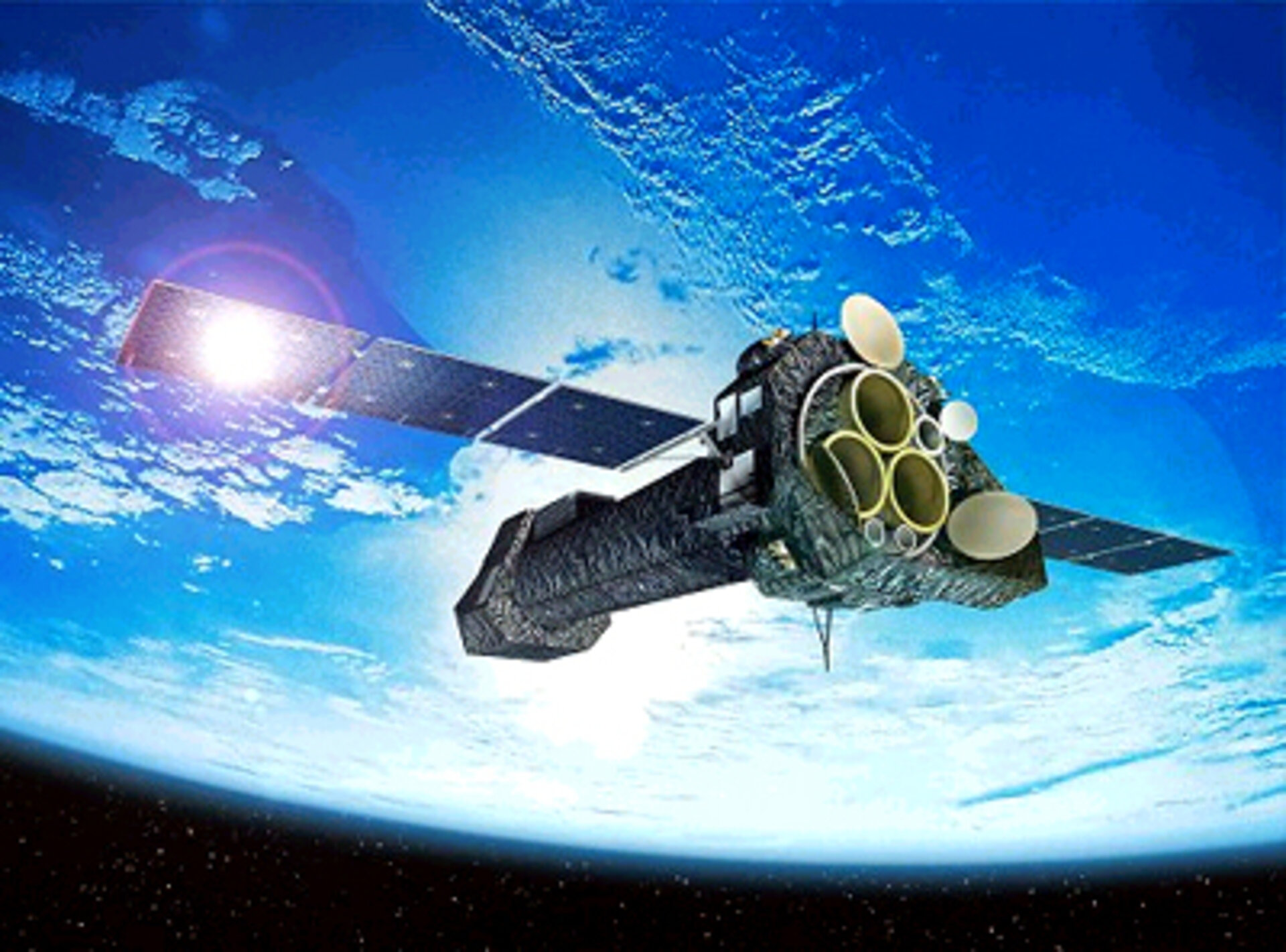 ESA's XMM-Newton space observatory is the flagship of European X-ray astronomy. It is the most powerful X-ray telescope ever placed in orbit and is observing the 'hot' X-ray universe including objects like neutron stars, black holes and active galaxies. Over 300 scientific papers are published annually using data provided by XMM-Newton.

The satellite is detecting more X-ray sources than any previous satellite and is helping solve cosmic mysteries, from what happens in and around black holes to the formation of galaxies in our early Universe. XMM-Newton's high-tech design uses over 170 wafer-thin cylindrical mirrors spread over three telescopes.

For science colleagues and professional friends of the mission: Your invitation to 20 years of XMM-Newton

Its 48-hour orbit takes it almost a third of the way to the Moon enabling astronomers to obtain long, uninterrupted views of celestial objects. At perigee (closest approach), it passes 20 000 km to above Earth at a speed of 24 000 km/hr. XMM-Newton's highly eccentric operational orbit has been chosen so that its instruments can work outside the radiation belts surrounding the Earth.

"The mission was originally designed for a 10-year life, however, since the satellite and instruments are operating admirably without major degradation, we hope to operate the observatory into the next decade, our only limitation being the hydrazine fuel supply. Our 'baby' has been out there for a long time now and is still providing X-ray astronomers with exiting new science results daily. Having worked previously as an astrophysicist for some time on the science side of XMM, I am now putting my energy into ensuring the safe and efficient continuation of mission operations," says Marcus.

Flawless mission operations is a key element in achieving a high scientific output. The mission provides the operations team with ongoing demands; XMM-Newton, for example, has no on-board storage so all vital science data must be downloaded via a ground station as soon as it is collected.

The mission is now in its 'extended routine phase', and continues to address new questions for classical X-ray astronomy, from the field of black holes, to neutron stars and active galactic nuclei, as well as contributing to new hot science topics such as dark matter, dark energy and gravitational waves. Technically, the observatory currently has enough resources to operate until 2031, providing the European X-ray community with high quality, state-of-the-art data until the launch of it successor mission, Athena. XMM-Newton might even fly in parallel with Athena for some time to generate a smooth calibration handover.

ESOC controls the mission 24/7, 365 days per year through a live ground station connection, since the spacecraft has only a limited amount of automation. However, over the years a lot of ground automation has been developed to operate it in a safe and efficient manner and to generate the highest possible science output.

In 2013, the flight control team together with industry re-programmed the on-board 'Attitude and Orbit Control System' in order to also use the back up reaction wheel. This new mode is called "4 wheel drive mode", and since 2013 has saved more than half of the fuel needed to control the spacecraft through day-to-day operations.

The on-board software has also been updated several times to improve and streamline mission operations. This has extended the remaining lifetime by a factor of two, currently giving the potential to operate the observatory until at least 2031.

Contact for continuous real-time interaction with the spacecraft over almost the entire orbit is provided by the ESA ground station at Kourou and via the SSC station at Santiago de Chile.

XMM-Newton's operational orbit is highly eccentric and has been chosen for two reasons. First, the XMM-Newton instruments need to work outside the radiation belts surrounding the Earth. Second, a highly eccentric orbit offers the longest possible observation periods - less interrupted by the frequent passages in the Earth's shadow that occur in a low orbit.

In addition, the orbital period of XMM-Newton is exactly two times the Earth rotation period to maintain optimal contact between XMM-Newton and the ground stations tracking the satellite. This allows XMM-Newton data to be received in real-time and for it to be fed to the Mission Control Centres.

XMM-Newton has no inboard data storage capacity, so all data is immediately downloaded to the ground in real time.

Since 2018, XMM-Newton has been operated, together with Gaia and INTEGRAL, with a joint controller team using new monitoring technologies for multi mission purposes.

The XMM-Newton SOC at ESAC manages science operations in continuous round-the-clock interaction with the MOC. The SOC is responsible for all science aspects of the mission, including relations with the science community, science observation planning, observation monitoring, quick-look analysis, instrument calibration, archiving, pipeline processing of all XMM science data and distribution.

The telescopes work in conjunction with cameras, a spectrometer and an optical/ultraviolet monitor.

The main mirror modules sends the image beam along the telescope tube to five cameras at the extremity of the spacecraft. At the prime focus of each of the telescopes, behind six-position filters, are three European Photon Imaging Cameras (EPIC). With silicon chips that can register extremely weak X-ray radiation, these advanced charge-coupled device (CCD) cameras are capable of detecting rapid variations in intensity, down to a thousandth of a second and less.

For a complementary analysis of the spectrum, a grating structure on two mirror modules reflects about half of the incoming rays to a secondary focus, with its own CCD camera. This Reflection Grating Spectrometer (RGS) "fans out" the various wavelengths, thus indicating, in more detail than EPIC, the exact condition of individual elements, such as oxygen and iron.

The third instrument aboard XMM-Newton is a conventional but very sensitive Optical/UV Monitor (OM), which can observe simultaneously the same regions as the X-ray telescopes, but in the ultraviolet and visible wavelengths. This gives astronomers complementary data about the X-ray sources. In orbit, this 30-cm telescope is as sensitive as a 4-metre instrument on the Earth's surface.

For more on XMM-Newton's instruments, follow the links above at right.