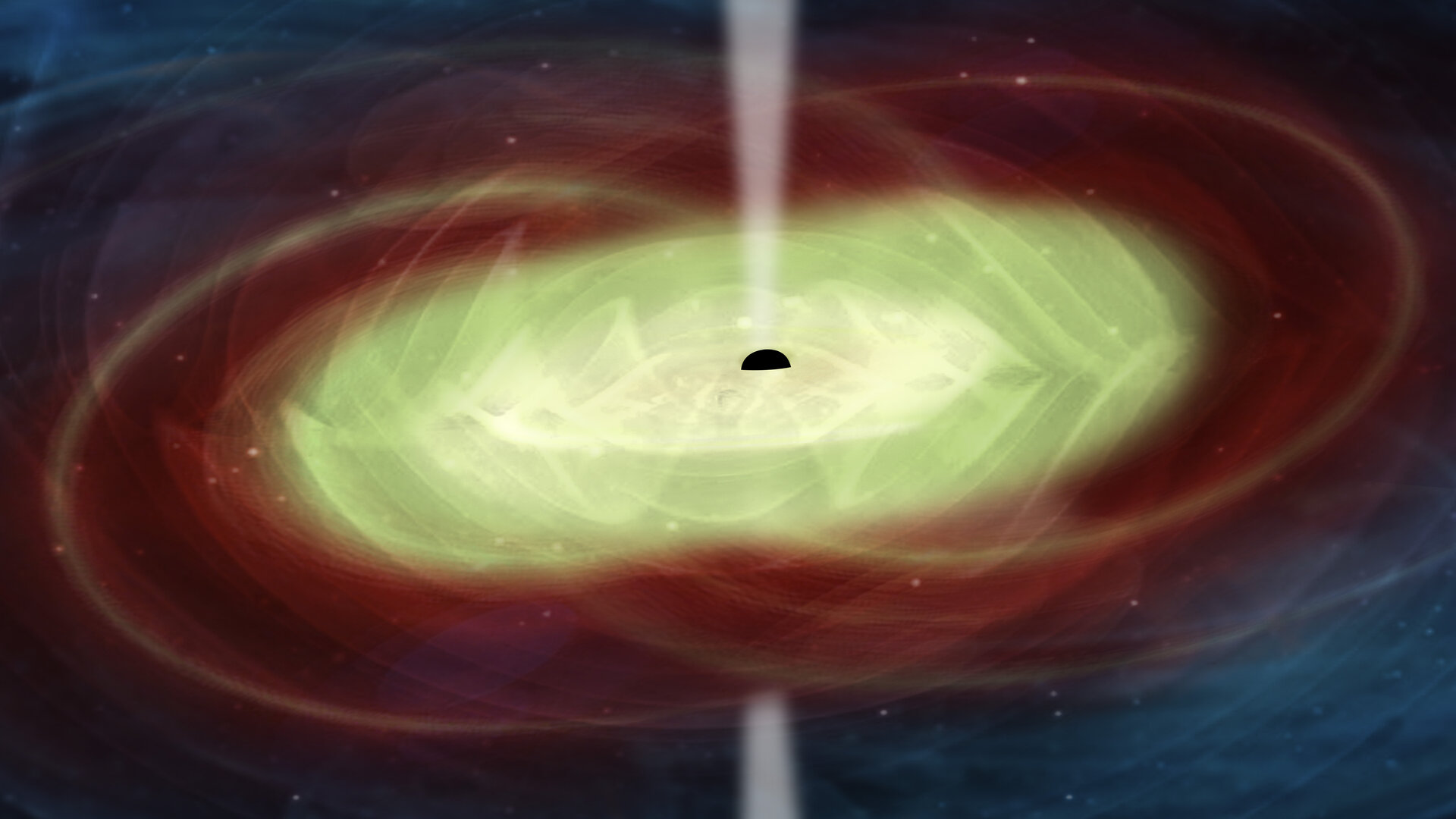 What happens when two supermassive black holes collide? Combining the observing power of two future ESA missions, Athena and LISA, would allow us to study these cosmic clashes and their mysterious aftermath for the first time.

Supermassive black holes, with masses ranging from millions to billions of Suns, sit at the core of most massive galaxies across the Universe. We don’t know exactly how these huge, enormously dense objects took shape, nor what triggers a fraction of them to start devouring the surrounding matter at extremely intense rates, radiating copiously across the electromagnetic spectrum and turning their host galaxies into ‘active galactic nuclei’.

Tackling these open questions in modern astrophysics is among the main goals of two future missions in ESA’s space science programme: Athena, the Advanced Telescope for High-ENergy Astrophysics, and LISA, the Laser Interferometer Space Antenna. Currently in the study phase, both missions are scheduled for launch in the early 2030s.

“Athena and LISA are both outstanding missions set to make breakthroughs in many areas of astrophysics,” says Günther Hasinger, ESA Director of Science.

“But there is one extremely exciting experiment that we could only perform if both missions are operational at the same time for at least a few years: bringing sound to the ‘cosmic movies’ by observing the merger of supermassive black holes both in X-rays and gravitational waves.

“With this unique opportunity to perform unprecedented observations of one of the most fascinating phenomena in the cosmos, the synergy between Athena and LISA would greatly increase the scientific return from both missions, ensuring European leadership in a key, novel area of research.”


Athena will be the largest X-ray observatory ever built, investigating some of the hottest and most energetic phenomena in the cosmos with unprecedented accuracy and depth.

It is designed to answer two fundamental questions: how supermassive black holes at the centre of galaxies form and evolve, and how ‘ordinary’ matter assembles, along with the invisible dark matter, to form the wispy ‘cosmic web’ that pervades the Universe.

“Athena is going to measure several hundreds of thousands of black holes, from relatively nearby to far away, observing the X-ray emission from the million-degree-hot matter in their surroundings,” says Matteo Guainazzi, Athena study scientist at ESA.

“We are in particular interested in the most distant black holes, those that formed in the first few hundred million years of the Universe’s history, and we hope we’ll be able to finally understand how they formed.”

Meanwhile, LISA will be the first space-borne observatory of gravitational waves – fluctuations in the fabric of spacetime produced by the acceleration of cosmic objects with very strong gravity fields, like pairs of merging black holes.

Gravitational-wave astronomy, inaugurated only a few years ago, is currently limited to the high-frequency waves that can be probed by ground-based experiments like LIGO and Virgo. These experiments are sensitive to the mergers of relatively small black holes – a few times to a few tens of times more massive than the Sun.

LISA will expand these studies by detecting low-frequency gravitational waves, such as the ones released when two supermassive black holes collide during a merger of galaxies.

“LISA will be the first mission of its kind, looking primarily for gravitational waves coming from supermassive black holes smashing into one another,” explains Paul McNamara, LISA study scientist at ESA.

“This is one of the most energetic phenomena we know of, releasing more energy than all the quiescent Universe does at any time. If two supermassive black holes merge anywhere in the cosmos, LISA will see it.”

The first few gravitational wave events detected by LIGO and Virgo between 2015 and 2017 all originated from pairs of stellar-mass black holes, which are known to not radiate any light upon coalescence. Then, in August 2017, gravitational waves coming from a different source – the merger of two neutron stars – were discovered.

This time, the gravitational waves were accompanied by radiation across the electromagnetic spectrum, readily observed with a multitude of telescopes on Earth and in space. By combining information from the various types of observations in an approach known as multi-messenger astronomy, scientists could delve into the details of this never-before-observed phenomenon.

With Athena and LISA together, we would be able to apply multi-messenger astronomy to supermassive black holes for the first time. Simulations predict that their mergers, unlike those of their stellar-mass counterparts, emit both gravitational waves and radiation – the latter originating in the hot, interstellar gas of the two colliding galaxies stirred by the black holes pair when they fall towards one another.


LISA will detect the gravitational waves emitted by the spiralling black holes about a month before their final coalescence, when they are still separated by a distance equivalent to several times their radii. Scientists expect that a fraction of the mergers found by LISA, especially those within distances of a few billion light years from us, will give rise to an X-ray signal that can be eventually seen by Athena.

“When LISA first detects a signal, we won’t know yet where exactly it’s coming from, because LISA is an all-sky sensor, so it works more like a microphone than a telescope,” explains Paul.

“However, as the black holes inspiral towards each other, the amplitude of their gravitational wave signal increases. This, coupled with the motion of the satellites along their orbits, will allow LISA to gradually improve the localisation of the source in the sky, up until the time when the black holes finally merge.”

A few days before the final phase of the merger, the gravitational wave data will constrain the position of the source to a patch on the sky measuring about 10 square degrees – roughly 50 times the area of the full Moon.

This is still pretty large, but would allow Athena to start scanning the sky to search for an X-ray signal from this titanic clash. Simulations indicate that the two spiralling black holes modulate the motion of the surrounding gas, so it is likely that the X-ray signature will have a  frequency commensurate to that of the gravitational wave signal.

Then, just a few hours before the final coalescence of the black holes, LISA can provide a much more precise indication in the sky, roughly the size of the field of view of Athena’s Wide Field Imager (WFI), so the X-ray observatory can directly point towards the source.

“Catching the X-ray signal before the black holes become one will be very challenging, but we are pretty confident that we can make a detection during and after the merger,” explains Matteo.

“We could see the emergence of a new X-ray source, and perhaps witness the birth of an active galactic nucleus, with jets of high-energy particles being launched at close to the speed of light above and beyond the newly formed black hole.”


We have never observed merging supermassive black holes – we do not yet have the facilities for such observations. First, we need LISA to detect the gravitational waves and tell us where to look in the sky; then we need Athena to observe it with high precision in X-rays to see how the mighty collision affects the gas surrounding the black holes. We can use theory and simulations to predict what might happen, but we need to combine these two great missions to find out.

One hundred years ago this month, on 29 May 1919, observations of the positions of stars during a total eclipse of the Sun provided the first empirical evidence of the gravitational bending of light predicted a few years earlier by Albert Einstein’s general theory of relativity.

This historic eclipse inaugurated a century of gravity experiments on Earth and in space, setting the stage for inspiring missions like Athena and LISA, and more exciting discoveries.

Athena was selected as the second large (L2) mission in ESA's Cosmic Vision programme in 2014, and LISA as the third large (L3) mission in 2017. The additional science that could be performed with both missions operating jointly is described in a 2019 white paper by the Athena-LISA synergy working group.

LISA is an ESA-led mission with important contributions from NASA. The LISA Consortium, led by the Max Planck Institute for Gravitational Physics in Germany, involves several ESA Member States and the US.