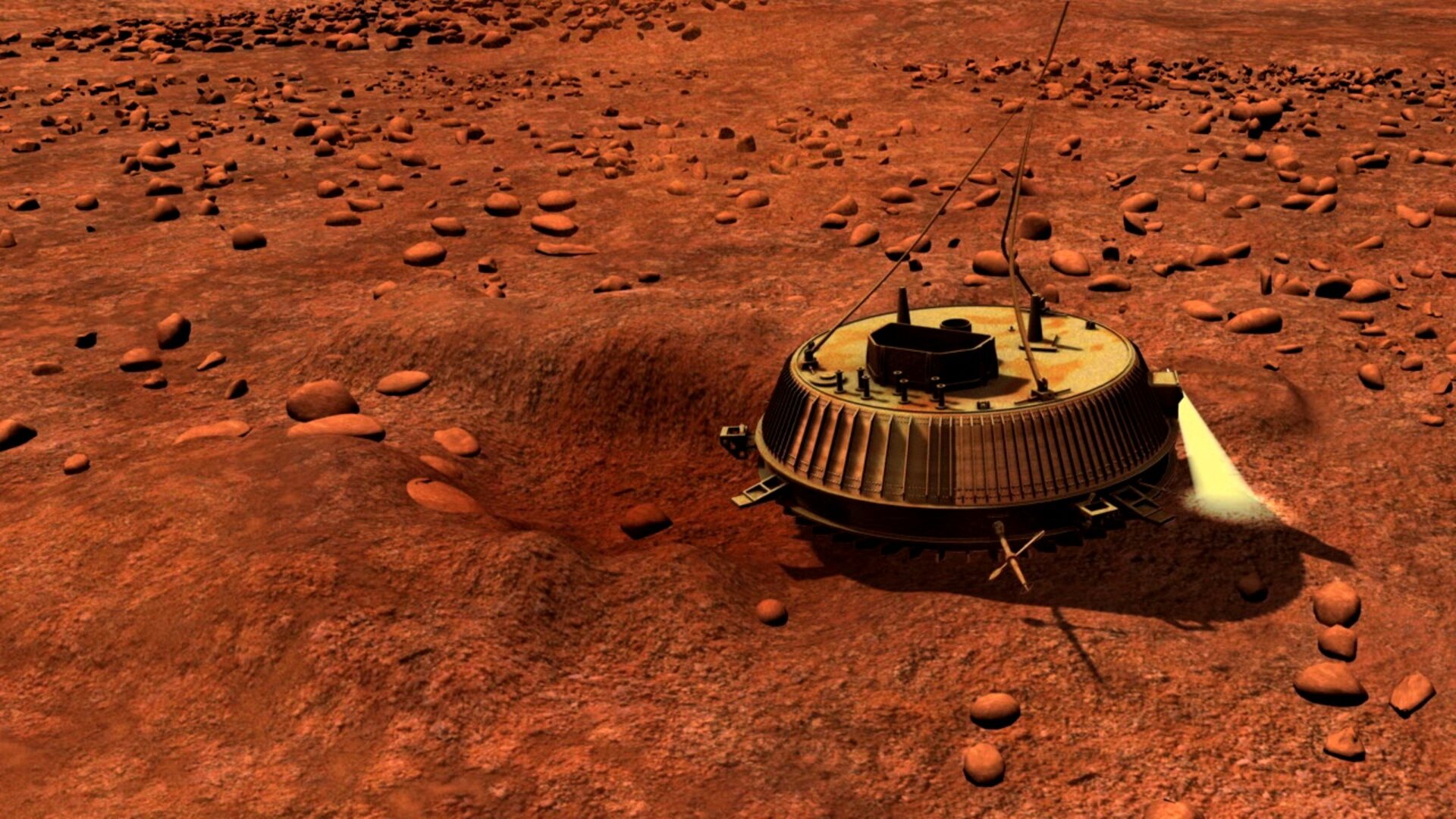 ESA’s Huygens probe bounced, slid and wobbled its way to rest in the 10 seconds after touching down on Saturn’s moon, Titan, in January 2005, a new analysis reveals. The findings provide novel insight into the nature of the moon’s surface.

Scientists reconstructed the chain of events by analysing data from a variety of instruments that were active during the impact, in particular changes in the acceleration experienced by the probe.

The instrument data were compared with results from computer simulations and a drop test using a model of Huygens designed to replicate the landing.

The analysis reveals that, on first contact with Titan’s surface, Huygens dug a hole 12 cm deep, before bouncing out onto a flat surface.

The probe, tilted by about 10 degrees in the direction of motion, then slid 30–40 cm across the surface.

It slowed due to friction with the surface and, upon coming to its final resting place, wobbled back and forth five times, with each wobble about half as large as the previous one.

“A spike in the acceleration data suggests that during the first wobble, the probe likely encountered a pebble protruding by around 2 cm from the surface of Titan, and may have even pushed it into the ground, suggesting that the surface had a consistency of soft, damp sand,” describes Dr Stefan Schröder of the Max Planck Institute for Solar System Research, lead author of the paper reporting the results in Planetary and Space Science.

Had the probe impacted a wet, mud-like substance, its instruments would have recorded a ‘splat’ with no further indication of bouncing or sliding.

The surface must have therefore been soft enough to allow the probe to make a hole, but hard enough to support Huygens rocking back and forth.

“We also see in the Huygens landing data evidence of a ‘fluffy’ dust-like material – most likely organic aerosols that are known to drizzle out of the Titan atmosphere – being thrown up and suspended for around four seconds after the impact,” says Dr Schröder.

Since the dust was easily lifted, it was most likely dry, suggesting that there had not been any ‘rain’ of liquid ethane or methane for some time prior to the landing.

“This study takes us back to the historical moment of Huygens touching down on the most remote alien world ever visited by a landing probe,” adds ESA’s Cassini-Huygens project scientist, Nicolas Altobelli.

“Huygens data, even years after mission completion, are providing us with a new dynamical ‘feeling’ for these crucial first seconds of landing.”