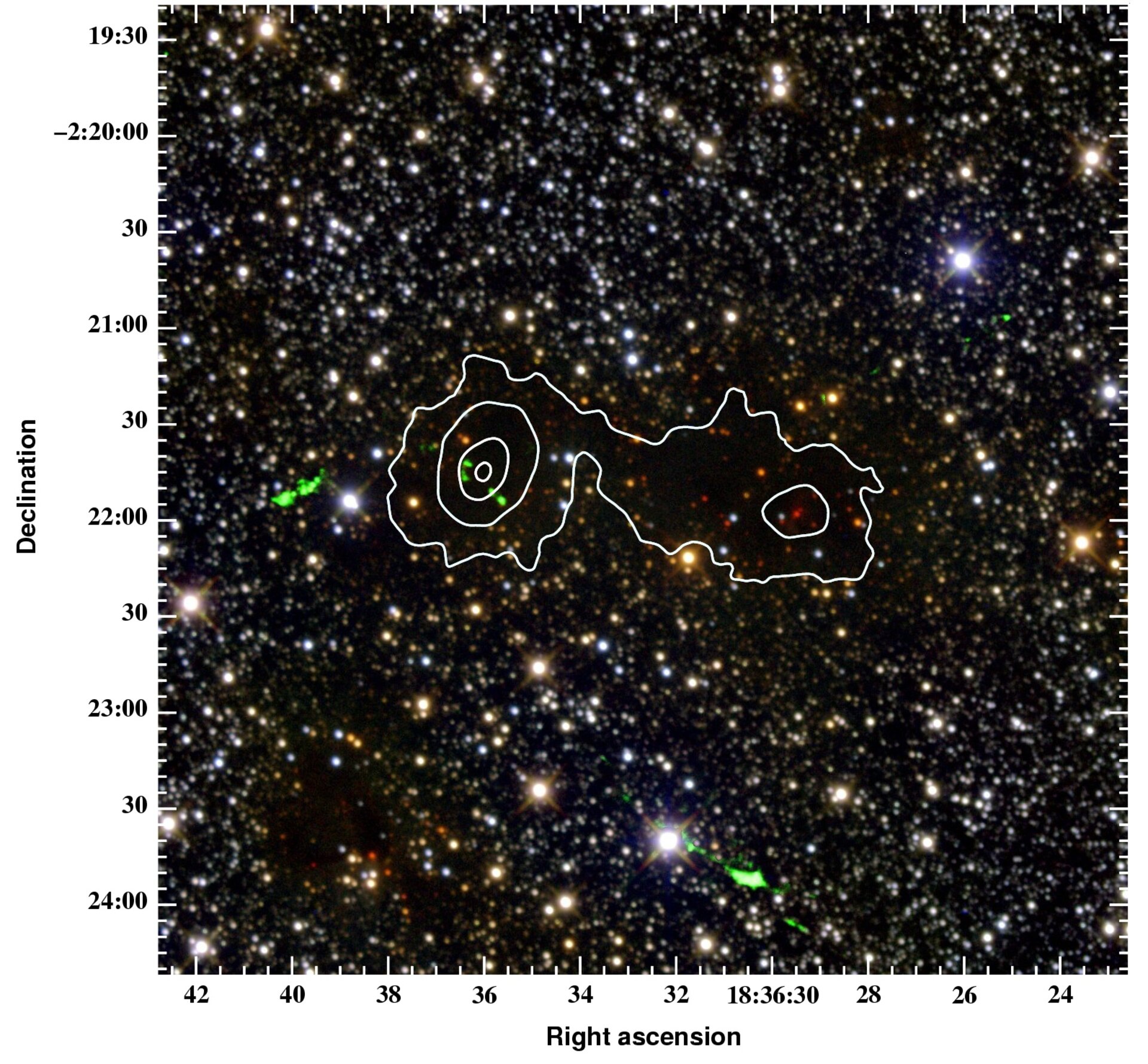 Scientists have secured their first look at the birth of monstrous stars that shine 100 000 times more brightly than the Sun, thanks to ESA’s Infrared Space Observatory (ISO).

The discovery allows astronomers to begin investigating why only some regions of space promote the growth of these massive stars.

Space is littered with giant clouds of gas. Occasionally, regions within these clouds collapse to form stars. “One of the major questions in the field of study is why do some clouds produce high- and low-mass stars, whilst others form only low-mass stars?” asks Oliver Krause, Max-Planck-Institut für Astronomie, Heidelberg and Steward Observatory, Arizona.

The conditions necessary to form high-mass stars are difficult to deduce because such stellar monsters form far away and are shrouded behind curtains of dust. Only long wavelengths of infrared radiation can escape from these obscuring cocoons and reveal the low temperature dust cores that mark the sites of star formation. This radiation is exactly what ISO’s ISOPHOT far-infrared camera has collected.

Stephan Birkmann, Oliver Krause and Dietrich Lemke, all of the Max-Planck-Institut für Astronomie, Heidelberg, used ISOPHOT’s data to zero-in on two intensely cold and dense cores, each containing enough matter to form at least one massive star. “This opens up a new era for the observations of the early details of high-mass star formation,” says Krause.

The data was collected in the ISOPHOT Serendipity Survey (ISOSS), a clever study pioneered by Lemke. He realised that when ISO was turning from one celestial object to another, valuable observing time was being lost. He organised for ISOPHOT’s far-infrared camera to continuously record during such slews and beam this data to Earth.

During the ISO mission, which lasted for two and a half years during 1995–98, the spacecraft made around 10 000 slews, providing a web of data across the sky for the previously unexplored window of infrared emission at 170 micrometres. This wavelength is 310 times longer than optical radiation and reveals cold dust down to just 10K (–263° Celsius). A catalogue was produced of the cold sites in the survey.

Birkmann and his colleagues investigated this catalogue and found fifty potential places of high-mass stellar birth. A campaign of follow-up observations using ground-based telescopes revealed that object ISOSS J18364-0221 was in fact two cold dense cores that looked suspiciously like those associated with the birth of low-mass stars, but containing much more mass.

The first core is at 16.5 Kelvin (–256.5° Celsius). It contains seventy-five times the mass of the Sun and shows signs of gravitational collapse. The second one is around 12K (–261° Celsius) and contains 280 solar masses. The team are currently studying the other potential sites.

Although ISO is no longer operational, ESA is currently participating in the Japanese Aerospace Exploration Agency’s infrared mission, Akari (former ASTRO-F). It will fill in the blanks in the ISOSS data by surveying the whole sky at six infrared wavebands. Beyond Akari, ESA will continue to pioneer infrared astronomy with its space telescope, Herschel, due to launch in 2008. Birkmann says, “With its 3.5 metre mirror and its far-infrared detectors, Herschel will unveil the earliest phases of massive star birth in unprecedented detail.”

This work could also help make sense of the most distant objects in the Universe. “When astronomers look billions of light years into space, all they can see are the bright, high-mass stars in very distant galaxies. If we can understand how these stars form, we may be able to apply that knowledge to understand how galaxies evolve,” says Krause.