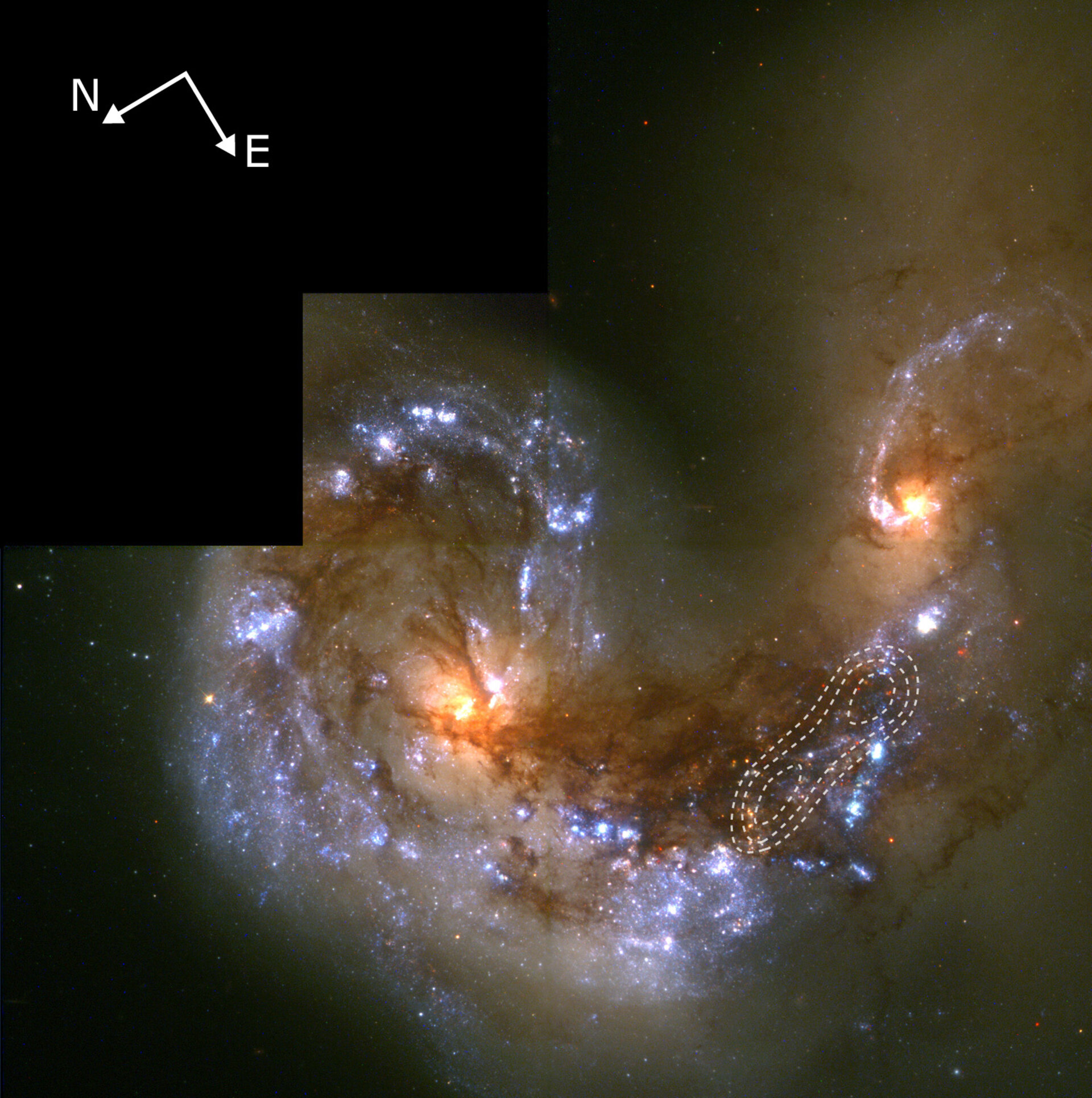 Data from ISO, the infrared observatory of the European Space Agency (ESA), have provided the first direct evidence that shock waves generated by galaxy collisions excite the gas from which new stars will form. The result also provides important clues on how the birth of the first stars was triggered and speeded up in the early Universe.

By observing our galaxy and others, scientists have long concluded that the explosion of massive stars like supernovae generates shock waves and ‘winds’ that travel through and excite the surrounding gas clouds. This process triggers the collapse of nearby gas that eventually leads to the birth of new stars, like a domino effect.

The signature of this process is the radiation emitted by molecular hydrogen. When hydrogen molecules are ‘excited’ by the energy of a nearby explosion, they emit a distinctive type of radiation that can be detected in the infrared.

This type of radiation is also observed in places where galaxies have collided with one another and the formation of new stars goes at a very high rate. So far, however, there was no clear picture of what happens in the time between the collision of two galaxies and the birth of the first new stars.

The missing link has now been found by a team of German astronomers that have analysed ISO data of the galaxy pair nicknamed the ‘Antennae’ (NGC 4038/4039). These two galaxies, located 60 million light-years away in the constellation ‘Corvus’ (the Crow), are currently at an early stage of encounter. The scientists noticed that the overlapping region of the two colliding galaxies is very rich in molecular hydrogen, which is in an excited state.

In particular, the radiation from molecular hydrogen is evenly strong in the northern and southern areas of the overlap region. Much to the team’s surprise, however, there are too few supernova explosions or regions of intense star formation there to explain the observed molecular hydrogen emission. So, the excitation of the molecular hydrogen must be the signature of that observationally rare pre-star birth phase in which hydrogen is excited by the mechanical energy produced in the collision and transported by shock waves. In other words, these results provide the first direct evidence of the missing link between gas collision and the birth of the first stars. The team estimates that when the gas will collapse to form new stars, during the next million years, the Antennae galaxy will become at least two times brighter in the infrared.

The astronomers believe that star formation induced by shocks may have played a role in the evolution of proto-galaxies in the first thousand million years of life of our Universe. Shock waves produced through the collision of proto-galaxies may have triggered the condensation process and speeded-up the birth of the very first stars. These objects, made up of only hydrogen and helium, would otherwise have taken much longer to form, since light elements such as hydrogen and helium take a long time to cool down and condense into a proto-star. Shock waves from the first cloud collisions may have been the helping hand.

These results, to be published this Spring in the scientific journal Astronomy & Astrophysics, were obtained by Martin Haas and Rolf Chini from the AIRUB Institute in Bochum (Germany), and by Ulrich Klaas, from the Max-Planck-Institut für Astronomie in Heidelberg (Germany).

The ESA Infrared Space Observatory (ISO) was launched in 1995 and operated from November that year to May 1998. At that time, it was the most sensitive infrared satellite ever launched and made particularly important studies of the dusty regions of the Universe, where visible light telescopes can see nothing. Regions of intense star formation in the colliding galaxies Antennae, were first discovered by ISO’s ISOCAM instrument in 1996. The wealth of data collected by ISO still produce important science results today, with over 130 publications published every year in the refereed literature. A review of ISO major achievements can be found at http://www.iso.vilspa.esa.es/science/SSR/.

ESA will reopen its examination of the infrared Universe when Herschel is launched in 2007.