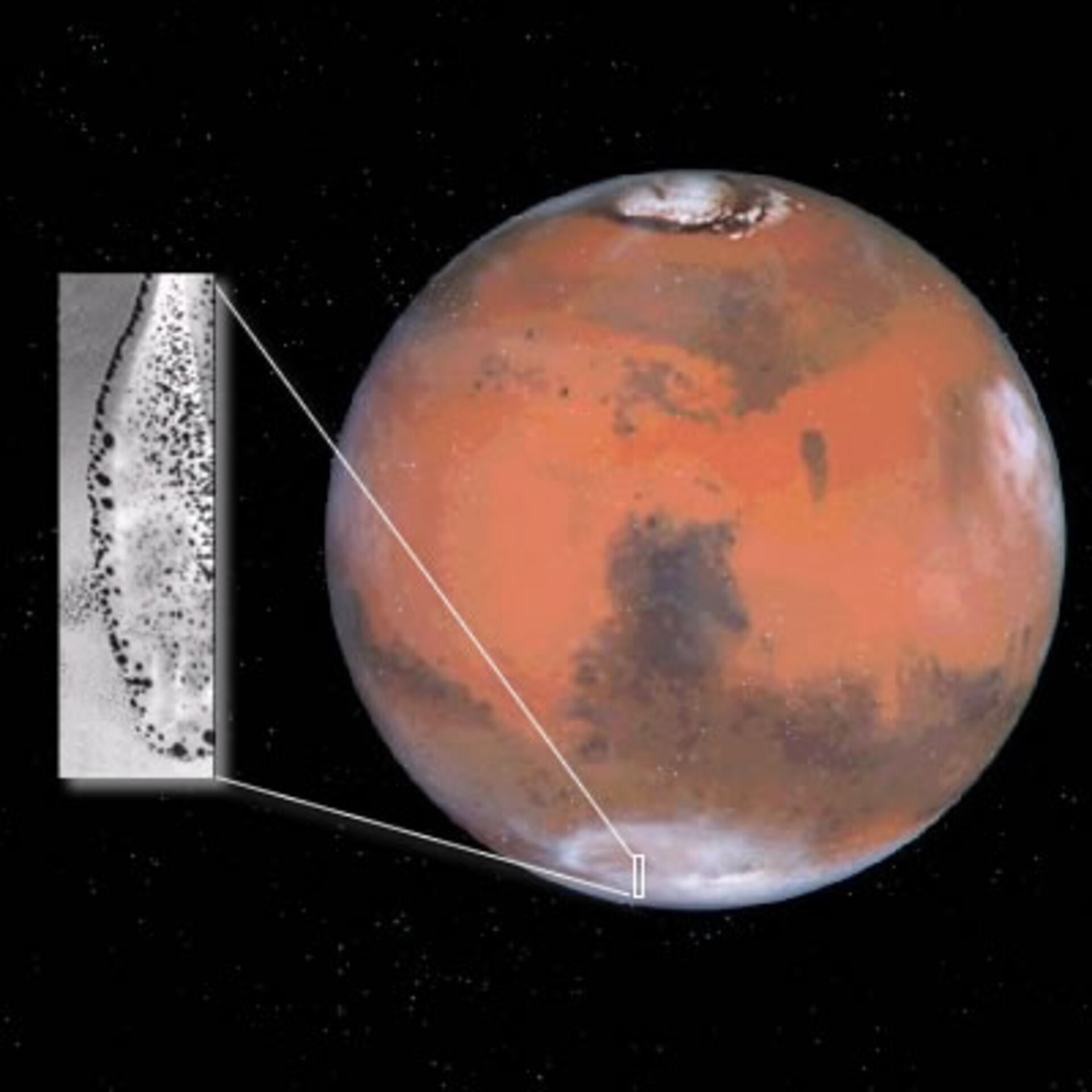 Are dark spots that appear near the south pole of Mars in early spring, a sign of life on the Red Planet? No-one can say for sure, according to a group of scientists who met at ESTEC, ESA's technical centre in the Netherlands. But the spots are certainly fascinating, the meeting agreed, and well worth a detailed look by Mars Express, the European Space Agency's Mars mission, when it goes into orbit around the Red Planet in late 2003.

Agustin Chicarro, ESA project scientist for Mars Express, called the meeting after the spots began fuelling controversy here on Earth last summer. "As a geologist, I found the spots quite perplexing and very exciting. I wanted to tap a broad spectrum of expert opinion to decide whether they warrant closer examination by Mars Express," he said.

The controversy began when András Horváth, Tibor Gánti and Eörs Szathmáry from the Planetarium and the Institute for Advanced Study, Budapest, suggested that the spots could be colonies of Martian microbes which wax and wane with the season. Michael Malin and Kenneth Edgett, designers of the Mars Orbital Camera on board NASA's Mars Global Surveyor spacecraft, which recorded the images of the spots, had previously suggested an explanation involving evaporation and re-freezing of predominantly carbon dioxide ice. The meeting considered these and other possibilities.

The spots appear on dunes found on the floors of craters in the south and north polar regions. The Hungarian team has examined the southern spots in detail. "They appear in late winter and by summer they have disappeared. They appear first at the margins of the dune fields and rarely appear on the ridges of dunes," Szathmary told the meeting. Their location (which is independent of the elevation of the land) and shape (which is circular on flat surfaces but elongated on slopes) seem to be at odds with a physical explanation alone, say the Hungarian scientists who have proposed a biological explanation instead.

The spots are colonies of photosynthetic Martian microorganisms, they hypothesise, which over-winter beneath the ice cap. As the Sun returns to the pole during early spring, light penetrates the ice, the microorganisms photosynthesise and heat their immediate surroundings. A pocket of water, which would normally evaporate instantly in the thin Martian atmosphere, is trapped around them by the overlying ice. As this ice layer thins, the microorganisms show through grey. When it has completely melted, they rapidly desiccate and turn black. This explains why many dark dune spots have a black centre surrounded by a grey aureole, say the Hungarian scientists.

Although there are several examples of black microorganisms growing in hostile environments on Earth, there could be a non-biological explanation for the dark colour of the spots on Mars, Marcello Coradini, ESA's Solar System Missions coordinator, told the meeting. "Images taken by the Giotto spacecraft showed that the black colour of cometary nuclei is formed when a mixture of carbon and water ice is exposed to ultraviolet radiation," he said. Experiments on board Mars Express could help to determine whether the same had happened on Mars.

Life at the extreme on Earth

The meeting heard that microorganisms have been found living in water pockets trapped within the ice cover of very salty lakes in Antarctic dry valleys. However, this environment, although hostile, is far more benign than that found in the Martian dune spots region, David Wynn-Williams from the British Antarctic Survey told the meeting. Temperatures at the Martian south pole reach -126 degrees Celsius compared with - 70 degrees Celsius in Antarctica. The thin Martian atmosphere also transmits far more damaging UV radiation than even the ozone-depleted atmosphere above the Antarctic.

Nobody knows just how tolerant life can be to these and other environmental stresses. On Earth, cyanobacteria, for example, come with a very efficient UV filter, said Wynn-Williams. "We are going to put some Antarctic microbes into space on the International Space Station to find out just how much UV they can take," he said.

A dearth of water, however, could be the biggest problem for Martian microorganisms. Martian south polar ice is thought to consist mainly of carbon dioxide and there may be insufficient water ice to sustain even the hardiest of microbes. GianGabriele Ori from the Gabriele D'Annunzio University in Pescara, Italy, doubted whether there is any ice at all over the dunes in question. "The dunes appear very distinct in the images," he said. "If there is a covering of ice, it must be very thin."

John Bridges from the Natural History Museum in London argued for an investigation of similar spots found in the northern polar region, pointing out that wind blown dust could have a role in their formation. Rock weathering, though, was dismissed as a cause "because the spots turn from black to white to black again - and you can't reverse weathering," said Ori.

The meeting agreed, however, that other geological explanations could not be ruled out. "The biological explanation is by far the most complex and is much less likely than a physical or chemical explanation," according to Wynn-Williams. "What we need to settle this is ground truth. We have to go there," said Ori.

Mars Express could take a look

No lander is presently planned to visit the dark dune spot areas. The Mars Express lander, Beagle 2, will touch down on Isidis Planitia, a large plain just north of the equator, at the end of 2003. However, several instruments on the Mars Express orbiter can observe selected areas of the Martian surface at very high resolution. "If the dark dune spots are selected as targets for analysis, many outstanding questions about the spots could be answered," said Chicarro.

OMEGA, the infrared mapping spectrometer, for example, could determine the mineral composition of the spots, allowing some hypotheses to be eliminated. PFS, the planetary Fourier spectrometer, could measure the amount of carbon dioxide and water ice present, the temperature of the spots compared with their surroundings and the pressure of the local atmosphere. MARSIS, the radar sounder, could determine the thickness of the ice and the HRSC, the camera, could take high resolution, 3D, full-colour images of the spots.

Images and data from orbit may eliminate some hypotheses, but proof of life on Mars will require landers and possibly humans to see the evidence firsthand. A future Mars lander could carry a Raman spectrometer capable of detecting the sorts of pigments used by microbes on Earth to harness solar energy for photosynthesis and to protect them from UV, Wynn-Williams told the meeting. Opportunities to fly this and other innovative instruments to Mars could be provided by Aurora, ESA's programme of planetary exploration currently under discussion.

Malcolm Fridlund, project scientist for Darwin, an ESA mission to search for life on extrasolar planets, however, ended the meeting on a philosophical note which expressed an understandable sentiment: "I find it hard to believe," he said "that Martian life, the last vestiges of a fertile time 3.5 billion years ago, has hung on by a thread for all this time until humans have developed the technology to find it."

Several papers on dark dune spots on Mars will be presented at the European Geophysical Society annual conference in Nice, France, 22-26 April 2002