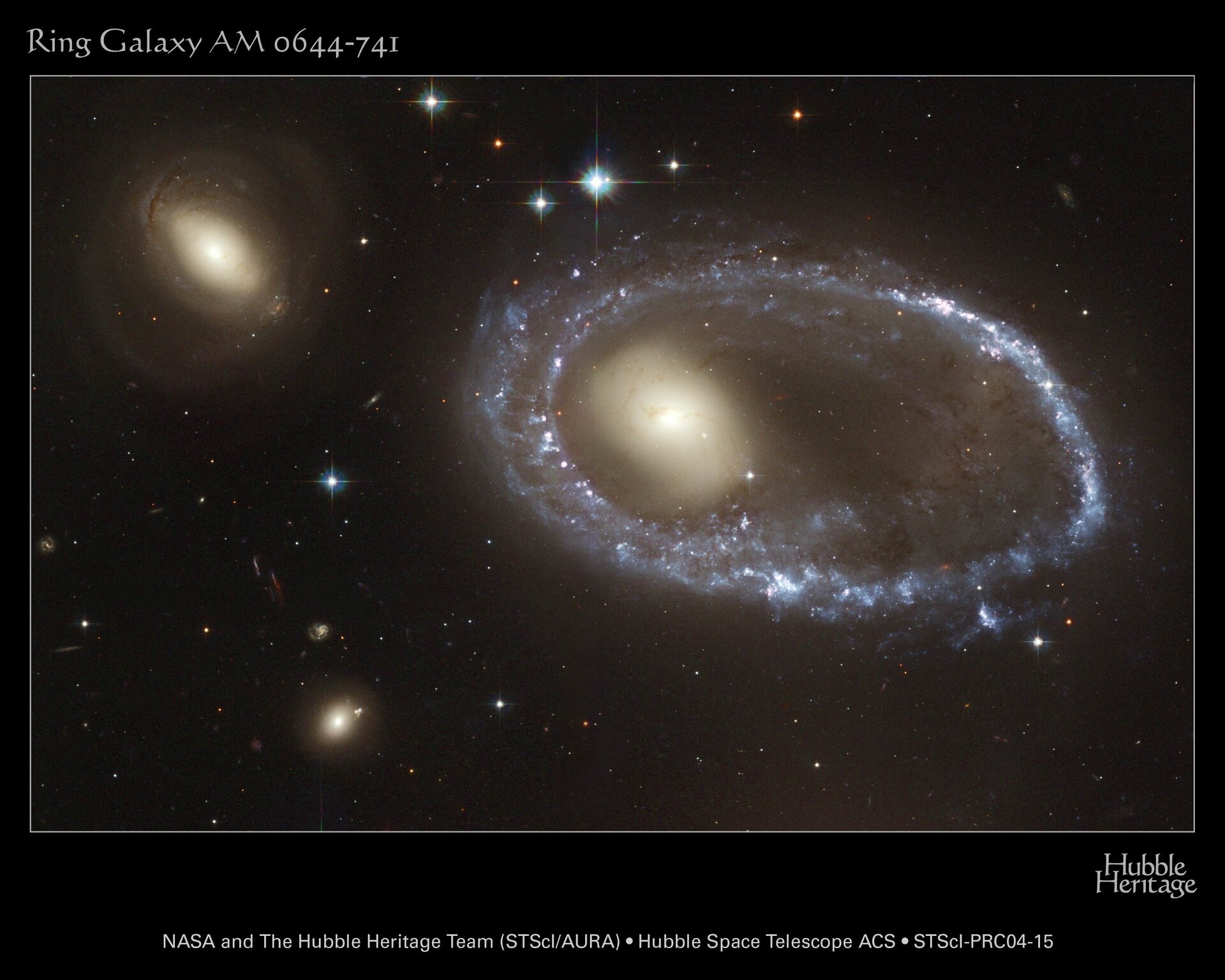 A ring of blue star clusters wraps around the yellowish nucleus of what was once a normal spiral galaxy in this new image from the NASA/ESA Hubble Space Telescope (HST).

This image is being released to commemorate the 14th anniversary of Hubble's launch on 24 April 1990 and its deployment from the space shuttle Discovery on 25 April 1990.

The bright blue ring is 150 000 light years in diameter, making it larger than our galaxy, the Milky Way. The galaxy, known as AM 0644-741, is a member of the class of ‘ring galaxies’. It lies 300 million light years away in the direction of the southern constellation Dorado.

Ring galaxies are a dramatic example of how collisions between galaxies can significantly change their structure, while also triggering the formation of new stars. They are caused by a particular type of collision, where one galaxy plunges directly through the disk of another.

In the case of AM 0644-741, the other galaxy that pierced through this ring galaxy is not in this image but visible in larger-field images.

The resulting gravitational shock due to the collision changes the orbits of stars and gas in original galaxy’s disk, causing them to rush outward, like ripples in a pond after a rock has been thrown in. As this ring plows outward into its surroundings, gas clouds collide and are compressed. The clouds can then contract under their own gravity, collapse and form new stars.

This amount of star formation explains why the ring is so blue: many massive, young and hot stars are continuously being formed, which are blue in colour. Other signs of star formation are the pink regions along the ring. These are rarefied clouds of hydrogen gas, which are fluorescing due to the ultraviolet light from the newly-formed stars.

Theoretical studies indicate that the blue ring will not continue to expand forever. After about 300 million years, it will reach a maximum radius and then begin to disintegrate.

The image was taken by Hubble's Advanced Camera for Surveys (ACS) in January 2004. The ACS was installed in 2002 to replace ESA's Faint Object Camera, one of the original instruments on Hubble which served faithfully for many years.