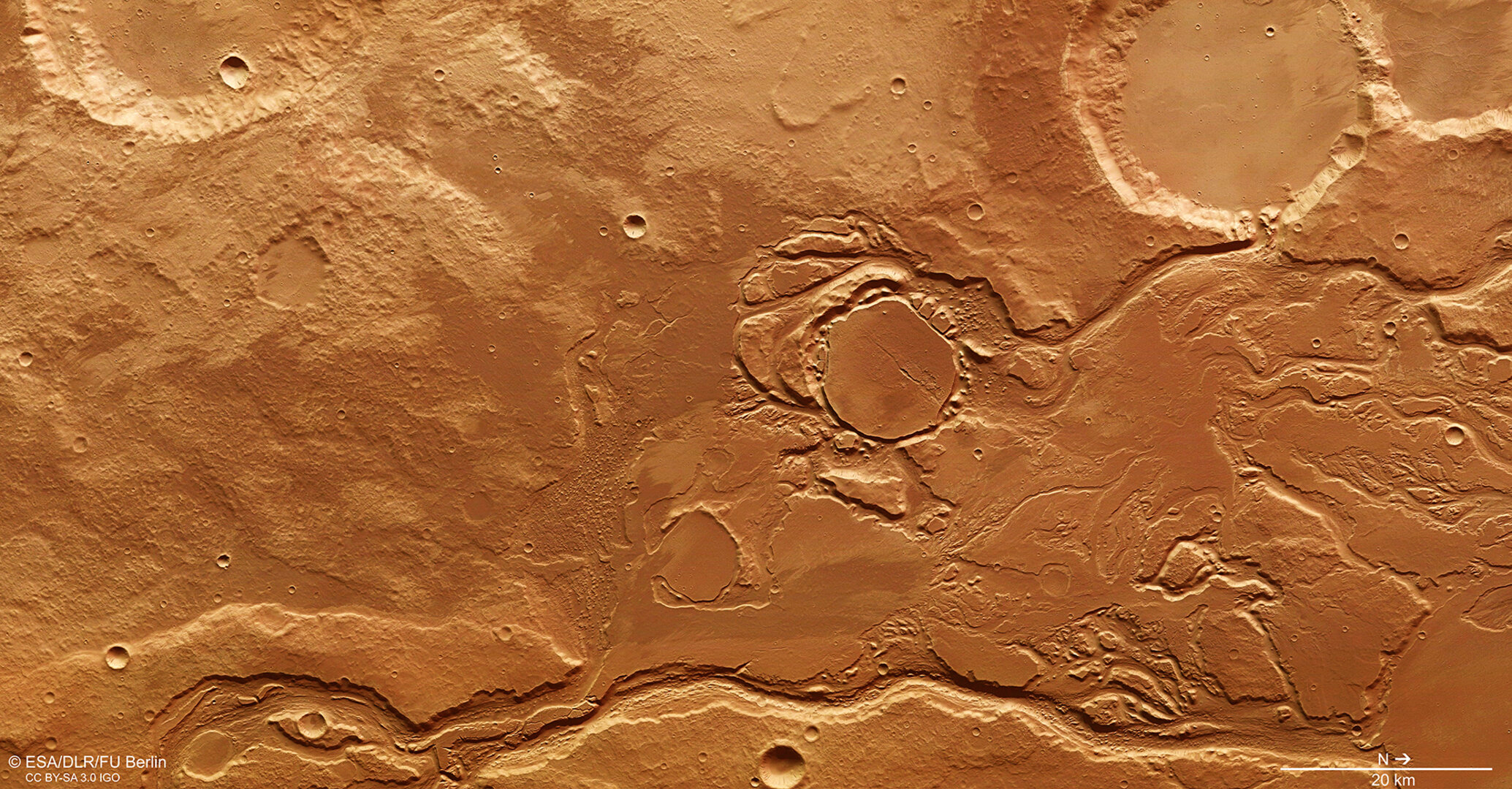 Catastrophic flooding triggered by ice melting from the heat of volcanic activity is thought to be responsible for the chaotic scenery depicted in this region of the Mangala Valles channel network.

The images were taken by the high-resolution stereo camera on ESA’s Mars Express on 12 July just to the south of the mouth of Minio Vallis. The region is part of the Mangala Valles outflow channel system, and is situated in the southwestern portion of the Tharsis bulge, home to several volcanoes, including the Solar System’s largest: Olympus Mons.

The region’s proximity to these volcanic giants likely played an important role in creating the channels seen in these images, which were carved by large volumes of flowing water.

The source of the water is believed to be related to the formation of the Mangala Fossae, an east–west fault system spanning several hundreds of kilometres to the south of the region seen here.

There, hot, molten rock could have reached the surface in an episode of increased volcanic activity during the formation of the Tharsis bulge.

This activity may have triggered the melting of subsurface ice, and consequently the formation of the water-carved channels.

Several basins and impact craters were also filled with water, with overflows flushing through multiple spillways and towards Amazonis Planitia, the lowlands to the north. For example, a channel drains into the 28 km-wide impact crater in the upper right of the main image, breaching its crater wall.

The crater in the centre of the image has a somewhat different appearance: it was filled with water and sediments and later eroded back again. ‘Chaotic terrain’ formed around it, characterised by isolated blocks of surface material that have been chaotically arranged during the release of subsurface water and subsequent surface collapse.

Another example of an infilled and eroded crater lies to the southeast (bottom left in the main image) of this crater.

The chaotic terrain suggests this region may also have had subsurface ice, which experienced multiple episodes of melting and flooding.

A deep channel carves through the landscape along the bottom edge of the image, its inner walls displaying layers, terraces and streamlined islands eroded by the outflowing water.

Mangala Valles is estimated to have been created during the Hesperian epoch about 3.5 billion years ago, with episodes of both volcanic and flooding activity likely continuing into the Amazonian age, perhaps as recently as a few hundred million years ago.