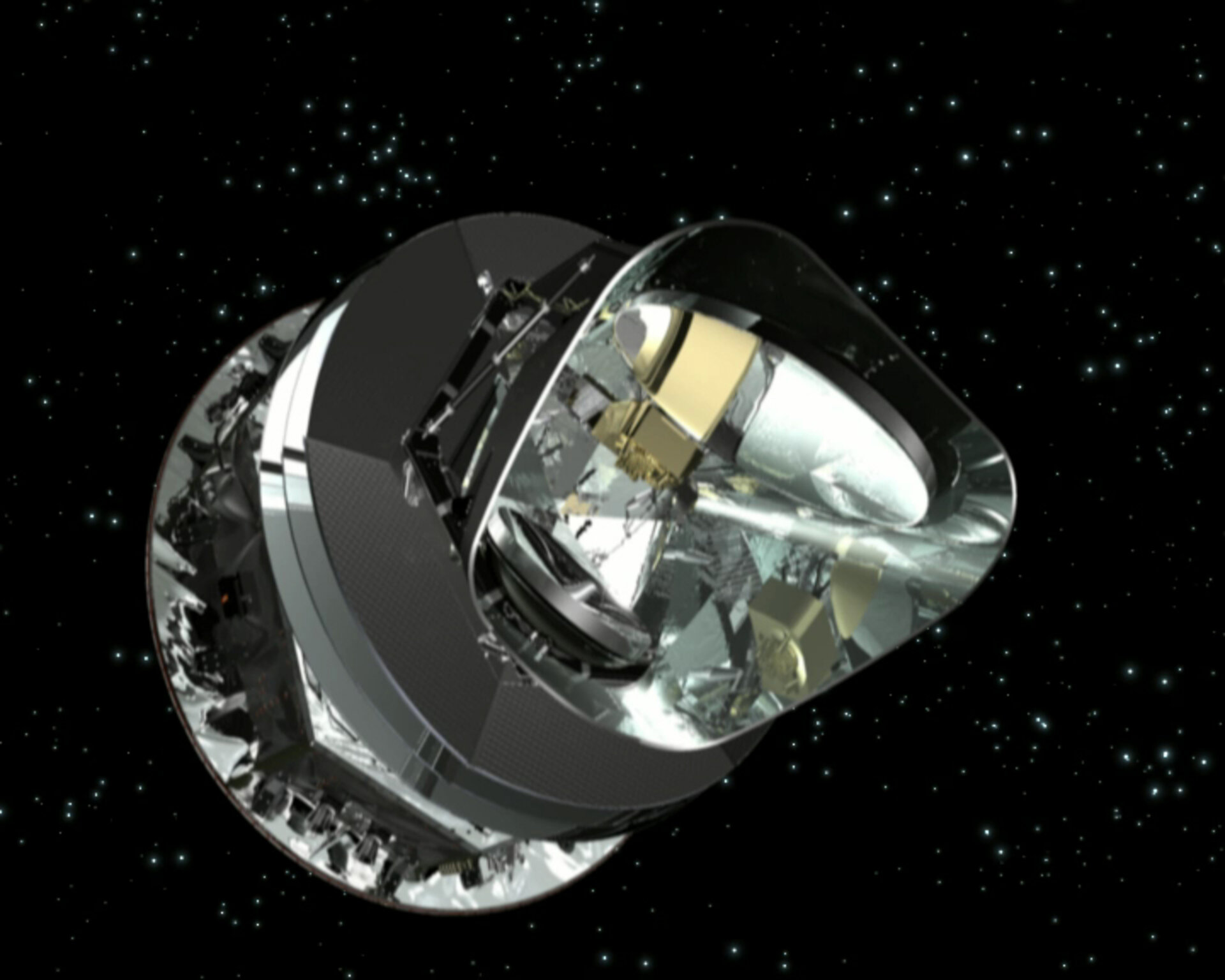 What is Planck and what is it studying?
What is the cosmic microwave background?
Why is it so important to study the CMB?
When was the CMB first detected?
How many space missions have studied the CMB?
What does the CMB look like?
What is ‘the standard model of cosmology’ and how does it relate to the CMB?

What is Planck and what is it studying?
Planck is a European Space Agency space-based observatory observing the Universe at wavelengths between 0.3 mm and 11.1 mm (corresponding to frequencies between 27 GHz and 1 THz), broadly covering the far-infrared, microwave, and high frequency radio domains. The mission's main goal is to study the cosmic microwave background – the relic radiation left over from the Big Bang – across the whole sky at greater sensitivity and resolution than ever before. Planck is therefore like a time machine, giving astronomers insight into the evolution since the birth of our Universe, nearly 14 billion years ago.

What is the cosmic microwave background?
The cosmic microwave background (or CMB) fills the entire Universe and is leftover radiation from the Big Bang. When the Universe was born, nearly 14 billion years ago, it was filled with hot plasma of particles (mostly protons, neutrons, and electrons) and photons (light). In particular, for roughly the first 380,000 years, the photons were constantly interacting with free electrons, meaning that they could not travel long distances. That means that the early Universe was opaque, like being in fog.

However, the Universe was expanding and as it expanded, it cooled, as the fixed amount of energy within it was able to spread out over larger volumes. After about 380,000 years, it had cooled to around 3000 Kelvin (approximately 2700ºC) and at this point, electrons were able to combine with protons to form hydrogen atoms, and the temperature was too low to separate them again. In the absence of free electrons, the photons were able to move unhindered through the Universe: it became transparent.

Over the intervening billions of years, the Universe has expanded and cooled greatly. Due to the expansion of space, the wavelengths of the photons have grown (they have been ‘redshifted’) to roughly 1 millimetre and thus their effective temperature has decreased to just 2.7 Kelvin, or around -270ºC, just above absolute zero. These photons fill the Universe today (there are roughly 400 in every cubic centimetre of space) and create a background glow that can be detected by far-infrared and radio telescopes.

Why is it so important to study the cosmic microwave background?
The cosmic microwave background (CMB) is the furthest back in time we can explore using light. It formed about 380,000 years after the Big Bang and imprinted on it are traces of the seeds from which the stars and galaxies we can see today eventually formed. Hidden in the pattern of the radiation is a complex story that helps scientists to understand the history of the Universe both before and after the CMB was released.

When was the cosmic microwave background first detected?
The existence of the cosmic microwave background (CMB) was postulated on theoretical grounds in the late 1940s by George Gamow, Ralph Alpher, and Robert Herman, who were studying the consequences of the nucleosynthesis of light elements, such as hydrogen, helium and lithium, at very early times in the Universe. They realised that, in order to synthesise the nuclei of these elements, the early Universe needed to be extremely hot and that the leftover radiation from this ‘hot Big Bang’ would permeate the Universe and be detectable even today as the CMB. Due to the expansion of the Universe, the temperature of this radiation has become lower and lower – they estimated at most 5 degrees above absolute zero (5 K), which corresponds to microwave wavelengths. It wasn’t until 1964 that it was first detected – accidentally – by Arno Penzias and Robert Wilson, using a large radio antenna in New Jersey, a discovery for which they were awarded the Nobel Prize in Physics in 1978.

How many space missions have studied the cosmic microwave background?
The first space mission specifically designed to study the cosmic microwave background (CMB) was the Cosmic Background Explorer (COBE), launched by NASA in 1989. Among its key discoveries were that averaged across the whole sky, the CMB shows a spectrum that conforms extremely precisely to a so-called ‘black body’ (i.e. pure thermal radiation) at a temperature of 2.73 Kelvin, but that it also shows very small temperature fluctuations on the order of 1 part in 100,000 across the sky. These findings were rewarded with the award of the 2006 Nobel Prize in Physics to John Mather and George Smoot.

NASA's second generation space mission, the Wilkinson Microwave Anisotropy Probe (WMAP) was launched in 2001 to study these very small fluctuations in much more detail. The fluctuations were imprinted on the CMB at the moment where the photons and matter decoupled 380,000 years after the Big Bang, and reflect slightly higher and lower densities in the primordial Universe. These fluctuations were originated at an earlier epoch – immediately after the Big Bang – and would later grow, under the effect of gravity, giving rise to the large-scale structure (i.e. clusters and superclusters of galaxies) that we see around us today. WMAP's results have helped determine the proportions of the fundamental constituents of the Universe and to establish the standard model of cosmology prevalent today, and its scientists, headed by Charles Bennett, have garnered many prizes in physics in the intervening years.

Finally, ESA's Planck was launched in 2009 to study the CMB in even greater detail than ever before. It covers a wider frequency range in more bands and at higher sensitivity than WMAP, making it possible to make a much more accurate separation of all of the components of the submillimetre and microwave wavelength sky, including many foreground sources such as the emission from our own Milky Way Galaxy. This thorough picture thus reveals the CMB and its tiny fluctuations in much greater detail and precision than previously achieved. The aim of Planck is to use this greater sensitivity to prove the standard model of cosmology beyond doubt or, more enticingly, to search for deviations from the model which might reflect new physics beyond it.

What does the cosmic microwave background look like?
The cosmic microwave background (CMB) is detected in all directions of the sky and appears to microwave telescopes as an almost uniform background. Planck’s predecessors (NASA's COBE and WMAP missions) measured the temperature of the CMB to be 2.726 Kelvin (approximately -270 degrees Celsius) almost everywhere on the sky. The ‘almost’ is the most important factor here, because tiny fluctuations in the temperature, by just a fraction of a degree, represent differences in densities of structure, on both small and large scales, that were present right after the Universe formed. They can be imagined as seeds for where galaxies would eventually grow. Planck's instrument detectors are so sensitive that temperature variations of a few millionths of a degree are distinguishable, providing greater insight to the nature of the density fluctuations present soon after the birth of the Universe.

What is ‘the standard model of cosmology’ and how does it relate to the CMB?
The standard model of cosmology rests on the assumption that, on very large scales, the Universe is homogeneous and isotropic, meaning that its properties are very similar at every point and that there are no preferential directions in space. In this model, the Universe was born nearly 14 billion years ago: at this time, its density and temperature were extremely high – a state referred to as 'hot Big Bang'. The Universe has been expanding ever since, as demonstrated by observations performed since the late 1920s. The rich variety of structure that we can observe on relatively small scales is the result of minuscule, random fluctuations that were embedded during cosmic inflation – an early period of accelerated expansion that took place immediately after the hot Big Bang – and that would later grow under the effect of gravity into galaxies and galaxy clusters.

The standard model of cosmology was derived from a number of different astronomical observations based on entirely different physical processes. To reconcile the data with theory, however, cosmologists have added two additional components that lack experimental confirmation: dark matter, an invisible matter component whose web-like distribution on large scales constitutes the scaffold where galaxies and other cosmic structure formed; and dark energy, a mysterious component that permeates the Universe and is driving its currently accelerated expansion. The standard model of cosmology can be described by a relatively small number of parameters, including: the density of ordinary matter, dark matter and dark energy, the speed of cosmic expansion at the present epoch (also known as the Hubble constant), the geometry of the Universe, and the relative amount of the primordial fluctuations embedded during inflation on different scales and their amplitude.

Different values of these parameters produce a different distribution of structures in the Universe, and a different corresponding pattern of fluctuations in the CMB. By looking at the CMB, Planck can help astronomers extract the parameters that describe the state of the Universe soon after it formed and how it evolved over billions of years.