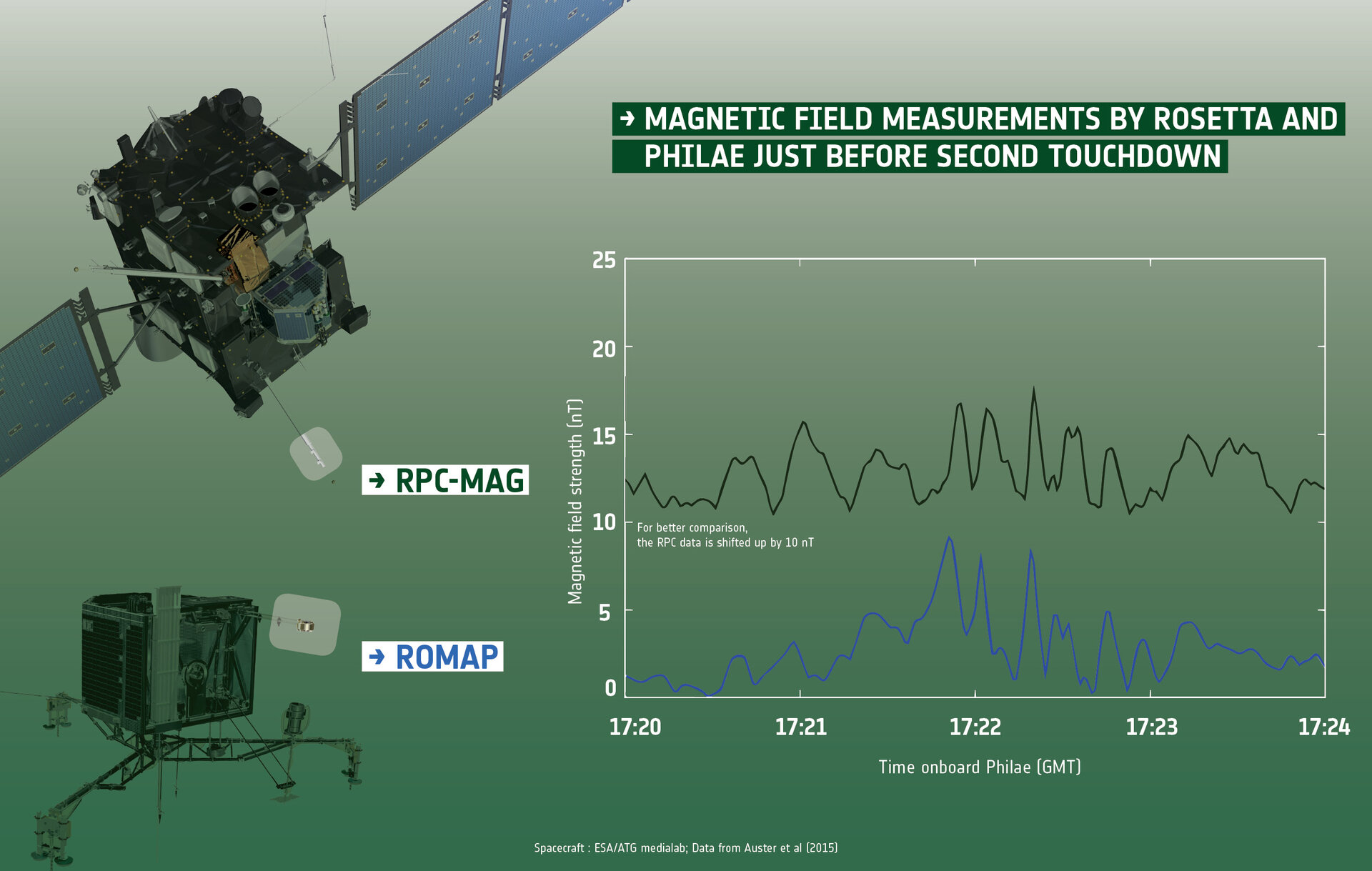 Measurements made by Rosetta and Philae during the probe’s multiple landings on Comet 67P/Churyumov-Gerasimenko show that the comet’s nucleus is not magnetised.

Studying the properties of a comet can provide clues to the role that magnetic fields played in the formation of Solar System bodies almost 4.6 billion years ago. The infant Solar System was once nothing more than a swirling disc of gas and dust but, within a few million years, the Sun burst into life in the centre of this turbulent disc, with the leftover material going into forming the asteroids, comets, moons and planets.

The dust contained an appreciable fraction of iron, some of it in the form of magnetite. Indeed, millimetre-sized grains of magnetic materials have been found in meteorites, indicating their presence in the early Solar System.

This leads scientists to believe that magnetic fields threading through the proto-planetary disc could have played an important role in moving material around as it started to clump together to form larger bodies.

But it remains unclear as to how crucial magnetic fields were later on in this accretion process, as the building blocks grew to centimetres, metres and then tens of metres across, before gravity started to dominate when they grew to hundreds of metres and kilometres in scale.

Some theories concerning the aggregation of magnetic and non-magnetic dust particles show that the resulting bigger objects could also remain magnetised, allowing them to also be influenced by the magnetic fields of the proto-planetary disc.

Because comets contain some of the most pristine materials in the Solar System, they offer a natural laboratory for investigating whether or not these larger chunks could have remained magnetised.

However, detecting the magnetic field of comets has proven difficult in previous missions, which have typically made rapid flybys, relatively far from comet nuclei.

It has taken the proximity of ESA’s Rosetta orbiter to Comet 67P/Churyumov-Gerasimenko, and the measurements made much closer to and at the surface by its lander Philae, to provide the first detailed investigation of the magnetic properties of a comet nucleus.

Philae’s magnetic field measuring instrument is the Rosetta Lander Magnetometer and Plasma Monitor (ROMAP), while Rosetta carries a magnetometer as part of the Rosetta Plasma Consortium suite of sensors (RPC-MAG).

Changes in the magnetic field surrounding Rosetta allowed RPC-MAG to detect the moment when Philae was deployed in the morning of 12 November 2014.

Then, by sensing periodic variations in the measured external magnetic field and motions in its boom arm, ROMAP was able to detect the touchdown events and determine the orientation of Philae over the following hours. Combined with information from the CONSERT experiment that provided an estimate of the final landing site location, timing information, images from Rosetta’s OSIRIS camera, assumptions about the gravity of the comet, and measurements of its shape, it was possible to determine Philae’s trajectory.

The mission teams soon discovered that Philae not only touched down once at Agilkia, but also came into contact with the comet’s surface four times in fact – including a grazing collision with a surface feature that sent it tumbling towards the final touchdown point at Abydos.

This complex trajectory turned out to be scientifically beneficial to the ROMAP team.

“The unplanned flight across the surface actually meant we could collect precise magnetic field measurements with Philae at the four points we made contact with, and at a range of heights above the surface,” says Hans-Ulrich Auster, co-principal investigator of ROMAP and lead author of the results published in the journal Science and presented at the European Geosciences Union General Assembly in Vienna, Austria, today.

The multiple descents and ascents meant that the team could compare measurements made on the inward and outward journeys to and from each contact point, and as it flew across the surface.

ROMAP measured a magnetic field during these sequences, but found that its strength did not depend on the height or location of Philae above the surface. This is not consistent with the nucleus itself being responsible for that field.

“If the surface was magnetised, we would have expected to see a clear increase in the magnetic field readings as we got closer and closer to the surface,” explains Hans-Ulrich.  “But this was not the case at any of the locations we visited, so we conclude that Comet 67P/Churyumov-Gerasimenko is a remarkably non-magnetic object.”

Instead, the magnetic field that was measured was consistent with an external one, namely the influence of the solar wind interplanetary magnetic field near the comet nucleus.  This conclusion is confirmed by the fact that variations in the field that were measured by Philae closely agree with those seen at the same time by Rosetta.

“During Philae’s landing, Rosetta was about 17 km above the surface, and we could provide complementary magnetic field readings that rule out any local magnetic anomalies in the comet’s surface materials,” says Karl-Heinz Glassmeier, principal investigator of RPC-MAG on board the orbiter and a co-author of the Science paper.

If large chunks of material on the surface of 67P/Churyumov-Gerasimenko were magnetised, ROMAP would have recorded additional variations in its signal as Philae flew over them.

“If any material is magnetised, it must be on a scale of less than one metre, below the spatial resolution of our measurements. And if Comet 67P/Churyumov-Gerasimenko is representative of all cometary nuclei, then we suggest that magnetic forces are unlikely to have played a role in the accumulation of planetary building blocks greater than one metre in size,” concludes Hans-Ulrich.

“It’s great to see the complementary nature of Rosetta and Philae’s measurements, working together to answer this simple, but important ‘yes-no’ question as to whether the comet is magnetised,” says Matt Taylor, ESA’s Rosetta project scientist.

Notes for Editors
“The non-magnetic nucleus of Comet 67P/Churyumov-Gerasimenko,” by H.-U. Auster et al. is published in Science Express on 14 April.

The results were also presented on 14 April at the European Geosciences Union (EGU) General Assembly 2015 in Vienna, Austria, during a dedicated Rosetta mission press briefing.

Overall, the data show that the comet has an upper magnetic field magnitude of less than 2 nT at the cometary surface at multiple locations, with a specific magnetic moment of < 3.1 x 10–5 Am2/kg, less than known values for lunar material and meteorites measured on Earth.