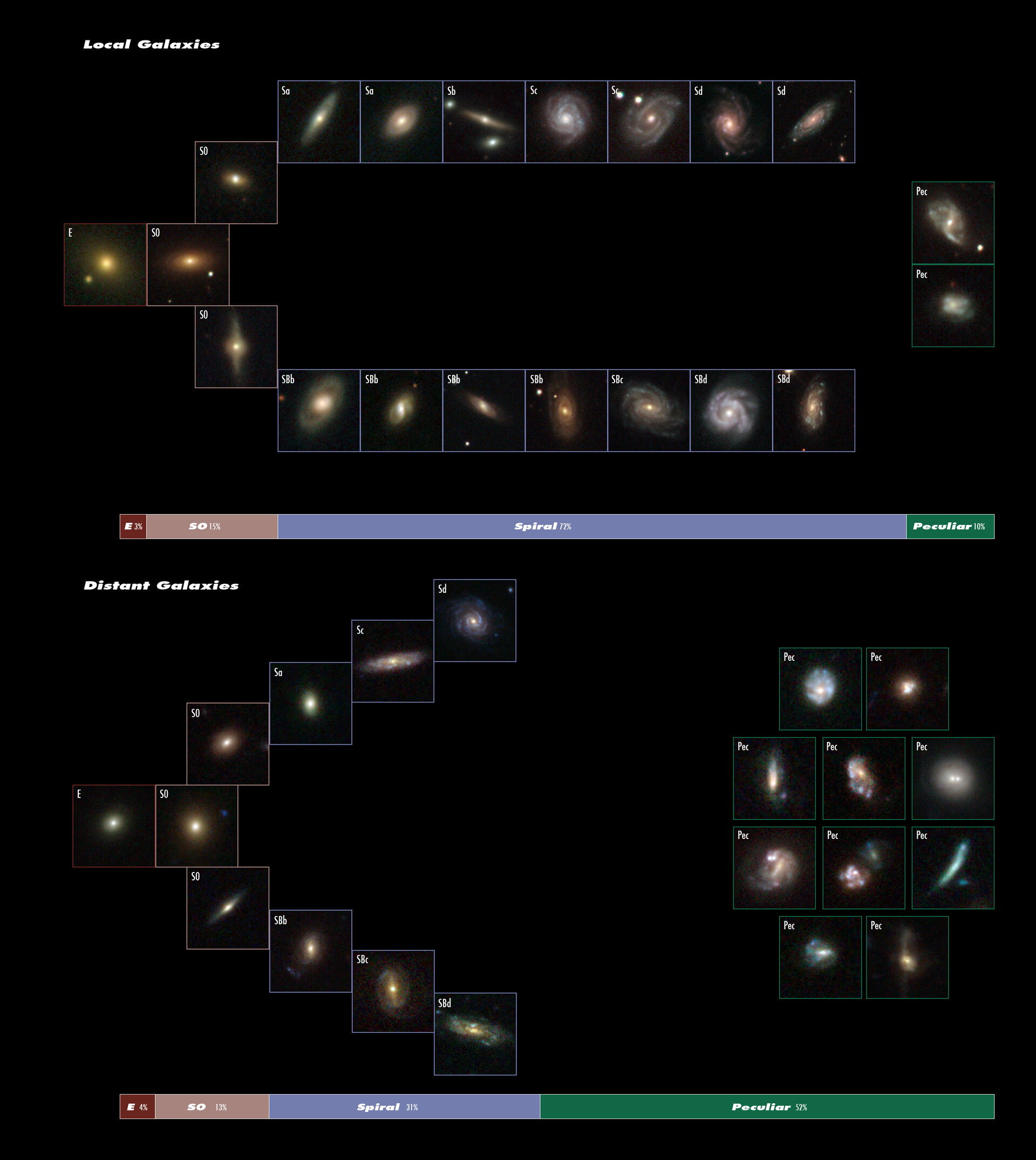 Hubble shows that the beautiful spirals galaxies of the modern Universe were the ugly ducklings of six billion years ago.

If confirmed, the finding highlights the importance to many galaxies of collisions and mergers in the recent past. It also provides clues for the unique status of our own galaxy, the Milky Way.

Using data from the NASA/ESA Hubble Space Telescope, astronomers have created a census of galaxy types and shapes from a time before Earth and the Sun existed, up to the present day. The results show that, contrary to contemporary thought, more than half of the present-day spiral galaxies had peculiar shapes as recently as 6 billion years ago.

The study of the shapes and formation of galaxies, known as morphology, is a critical and much-debated topic in astronomy. An important tool for this is the ‘Hubble sequence’ or the ‘Hubble tuning-fork diagram’, a classification scheme invented in 1926 by the same Edwin Hubble in whose honour the space telescope is named.

A team of European astronomers led by François Hammer of the Observatoire de Paris has, for the first time, completed a census of galaxy types at two different points in the Universe’s history — in effect, creating two Hubble sequences — that help explain how galaxies form. In this survey, researchers sampled 116 local galaxies and 148 distant galaxies.

This means that in the last six billion years, these peculiar galaxies must have become normal spirals, giving us a more dramatic picture of the recent Universe than we had before.

The astronomers show that the Hubble sequence six billion years ago was very different from the one that astronomers see today. “Six billion years ago, there were many more peculiar galaxies than now – a very surprising result,” says Rodney Delgado-Serrano, lead author of the related paper recently published in Astronomy & Astrophysics. “This means that in the last six billion years, these peculiar galaxies must have become normal spirals, giving us a more dramatic picture of the recent Universe than we had before.”

The astronomers think that these peculiar galaxies did indeed become spirals through collisions and merging. Although it was commonly believed that galaxy mergers decreased significantly eight billion years ago, the new result implies that mergers were still occurring frequently after that time — up to as recently as four billion years ago. “Our aim was to find a scenario that would connect the current picture of the Universe with the morphologies of distant, older galaxies — to find the right fit for this puzzling view of galaxy evolution,” says Hammer.

Also contrary to the widely held opinion that galaxy mergers result in the formation of elliptical galaxies, Hammer and his team support a scenario in which these cosmic clashes result in spiral galaxies. In a parallel paper published in Astronomy & Astrophysics, they delve further into their ‘spiral rebuilding’ hypothesis, which proposes that peculiar galaxies affected by gas-rich mergers are slowly reborn as giant spirals with discs and central bulges.

Although our own Galaxy is a spiral galaxy, it seems to have been spared much of the drama; its formation history has been rather quiet and it has avoided violent collisions in astronomically recent times. However, the large Andromeda Galaxy from our neighbourhood has not been so lucky and fits well into the ‘spiral rebuilding’ scenario. Researchers continue to seek explanations for this.

Hammer and his team used data from the Sloan Digital Sky Survey undertaken by Apache Point Observatory, New Mexico, USA, and from the GOODS field and Hubble Ultra Deep Field taken by the Advanced Camera for Surveys aboard Hubble.