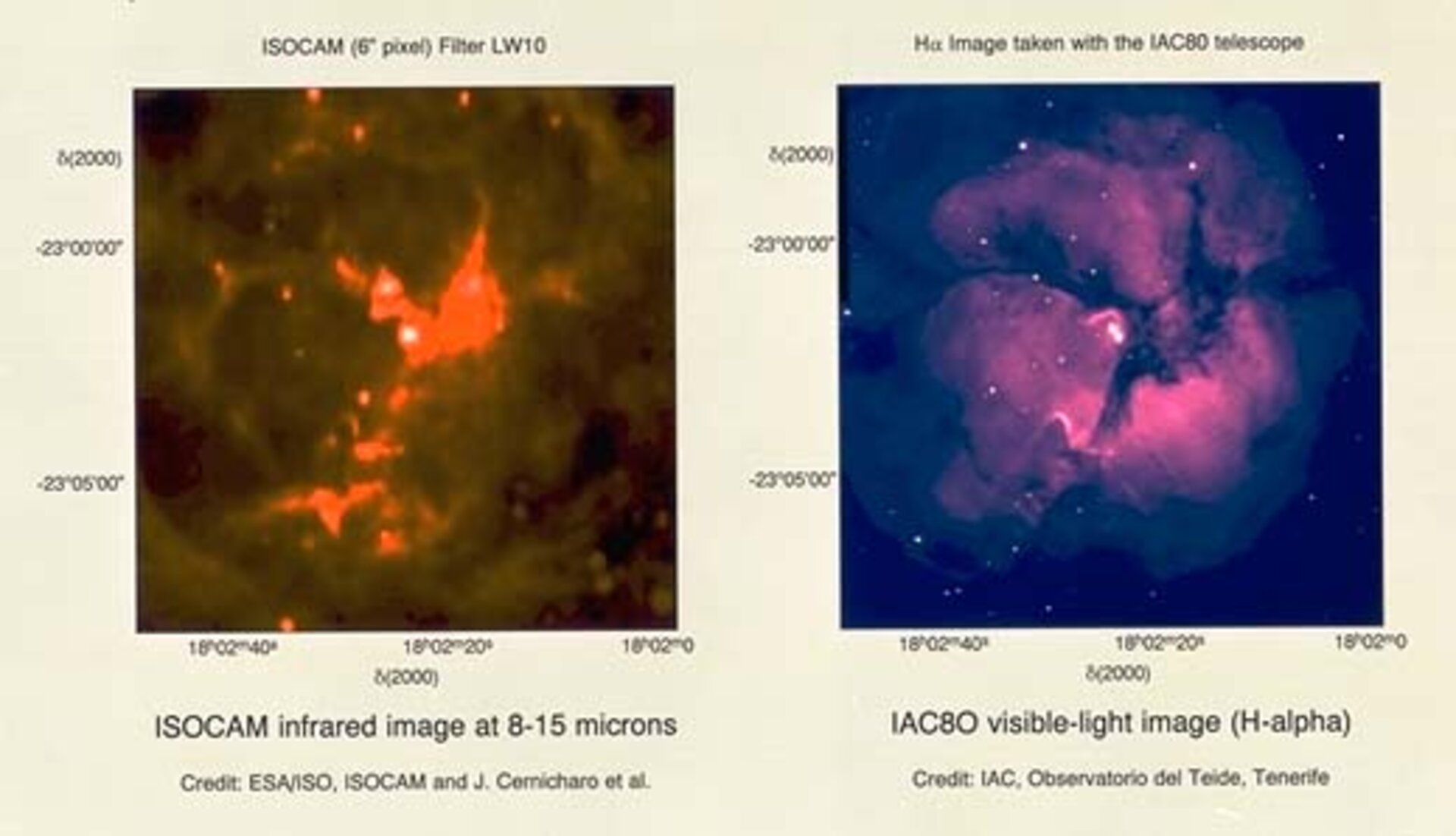 'An Infrared negative of a bright nebula'

The Trifid Nebula in the constellation Sagittarius changes its appearance dramatically when seen by infrared light by ESA's Infrared Space Observatory ISO. In the picture obtained by ISO's ISOCAM camera, the regions of strongest emissions correspond to dark bands seen by visible light by a Spanish ground-based telescope. The infrared image looks like a negative of the visible nebula. The bright, pink-glowing nebula (right) was imaged by the IAC80 telescope of the Instituto de Astrofisica de Canarias, Tenerife, Spain. It is a cloud of hydrogen gas activated by intense radiation from a clutch of newly formed, very massive stars at the centre of the nebula. The dark bands are dusty clouds that block the visible light, but are themselves a strong source of infrared rays, which can escape from the molecular cloud. Jose Cernicharo of the Instituto de Estructura de la Materia (CSIC) in Madrid, Spain, has carried out a systematic study of the Trifid with the four instruments onboard the ISO satellite. He supervised the preparation of this ISOCAM image (left). Cernicharo notes that many distinct regions of strong infrared emissions reveal that the dust bands are populated by individual dense, cool clouds, which may be sites of new star formation. In fact, all of these young clouds are associated with very young proto-stellar sources, as shown by radio observations in the millimetre domain with the IRAM 30-metre radio telescope. As Cernicharo and his collaborators discovered, a globule seen in the lower left part of the optical and infrared images is associated with a jet seen in the optical image. This indicates that a very young star has been formed inside the globule under the influence of the ionising central star. Historical note. The bright nebula was discovered about 250 years ago by the French astronomer Legentil de La Galaisi&egrave;re, and soon won a place as M20 in Charles Messier's catalogue of nebulous objects. When Johan Dreyer compiled his more comprehensive New General Catalogue (1888) he numbered it NGC 6514. The name Trifid, meaning split three ways, arose because that was how it looked in 19th Century telescopes. In modern optical instruments there seem to be four of five parts. [Image Date: 01-07-97] [97.07.008-002]