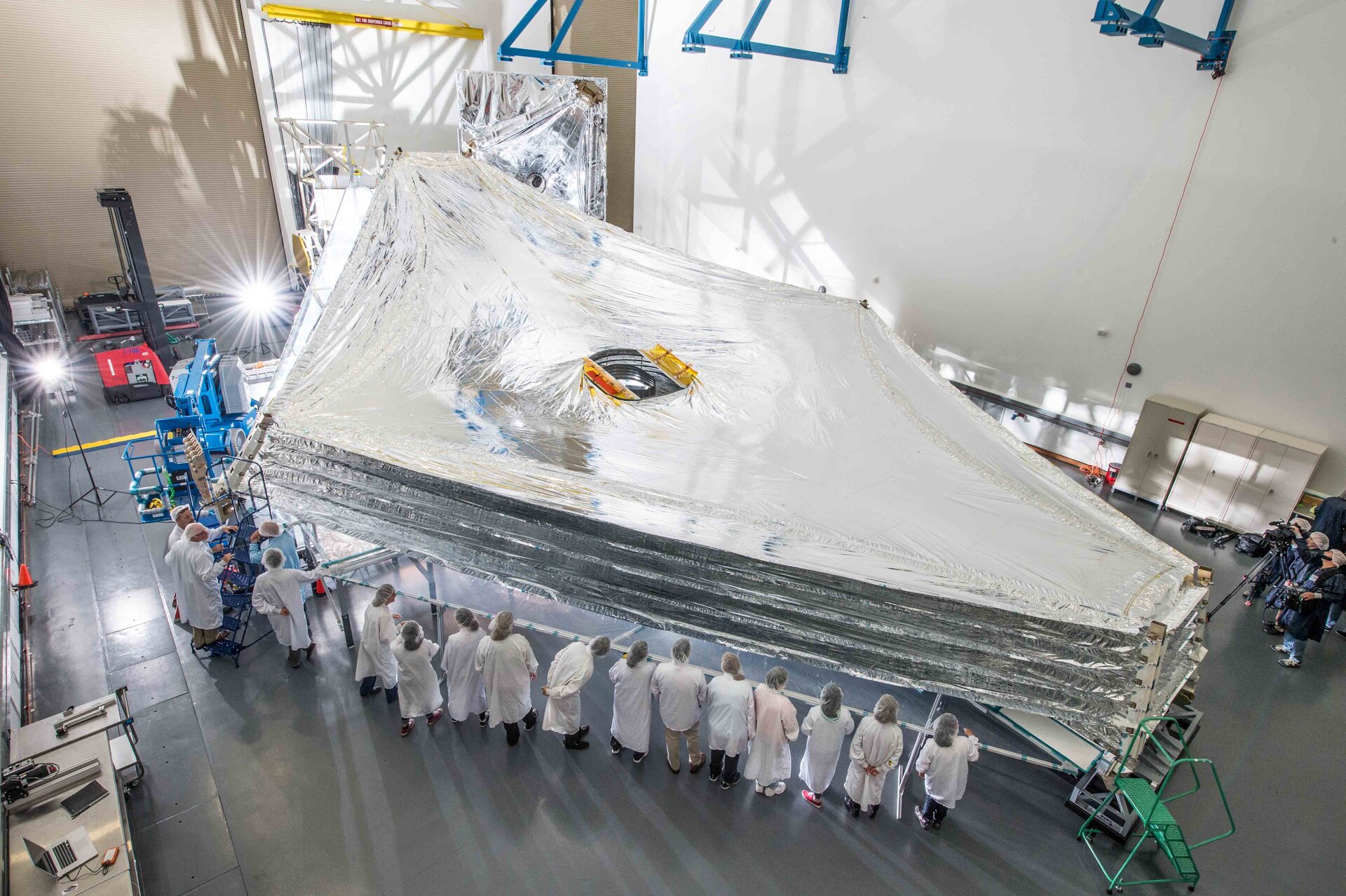 Shelter from the Sun

Here on Earth, under the protection of the layers of our atmosphere, we can still find the heat from the Sun sometimes almost unbearable. This is also a problem for space-based telescopes like the James Webb Space Telescope (JWST).

Once in its operational orbit, JWST will be exposed directly to the Sun’s intense glare – not ideal when most of JWST needs to be kept at very cool, infrared-friendly temperatures. To cater for this, the observatory needs to be equipped with a protective parasol.

The kite-shaped piece of foil shown here is the sunshield test unit for JWST. This image captures the first time the deployment of the sunshield was fully and successfully tested, at a cleanroom in the Northrop Grumman facility in Redondo Beach, California, USA, during the first week of July 2014.

This sunshield is the largest part of JWST and offers intense protection from the Sun, letting through less than a millionth of the Sun’s heat! This massive parasol is as long as a tennis court, but incredibly light. It is composed of five super-thin membranes that will separate and unfurl into a precise arrangement once the telescope is in space. During launch, this shield will be folded up like an umbrella to fit neatly around the telescope’s mirrors and other instruments within the Ariane 5 rocket fairing.

When unfurled, the sunshield will protect JWST’s ‘cold’ side, where very sensitive infrared instruments are located inside the Integrated Science Instruments Module, maintaining a thermally stable cold environment, around –233 ºC!

Thanks to the sunshield, these low temperatures are reached passively, without the help of any active cooling system, by radiating heat into deep space. Just one of JWST's instruments, the Mid-Infrared Instrument (MIRI), will be cooled even further by a dedicated cryogenic cooler, reaching around –266 ºC. Although parts of JWST will reach such low temperatures, the shield will create a thermal barrier so that on JWST’s ‘hot’ side, the spacecraft electronics can work at room temperature.

Unlike its predecessor, the Hubble Space Telescope, JWST does not have a baffle protecting its optics from unwanted incoming light. This makes the sunshield’s role even more important because it will not only block heat, but also unwanted light, allowing JWST to operate to the best of its near-infrared capabilities.

When completed, JWST will be the most powerful space observatory ever built. JWST is an international collaboration between NASA, ESA and the Canadian Space Agency.