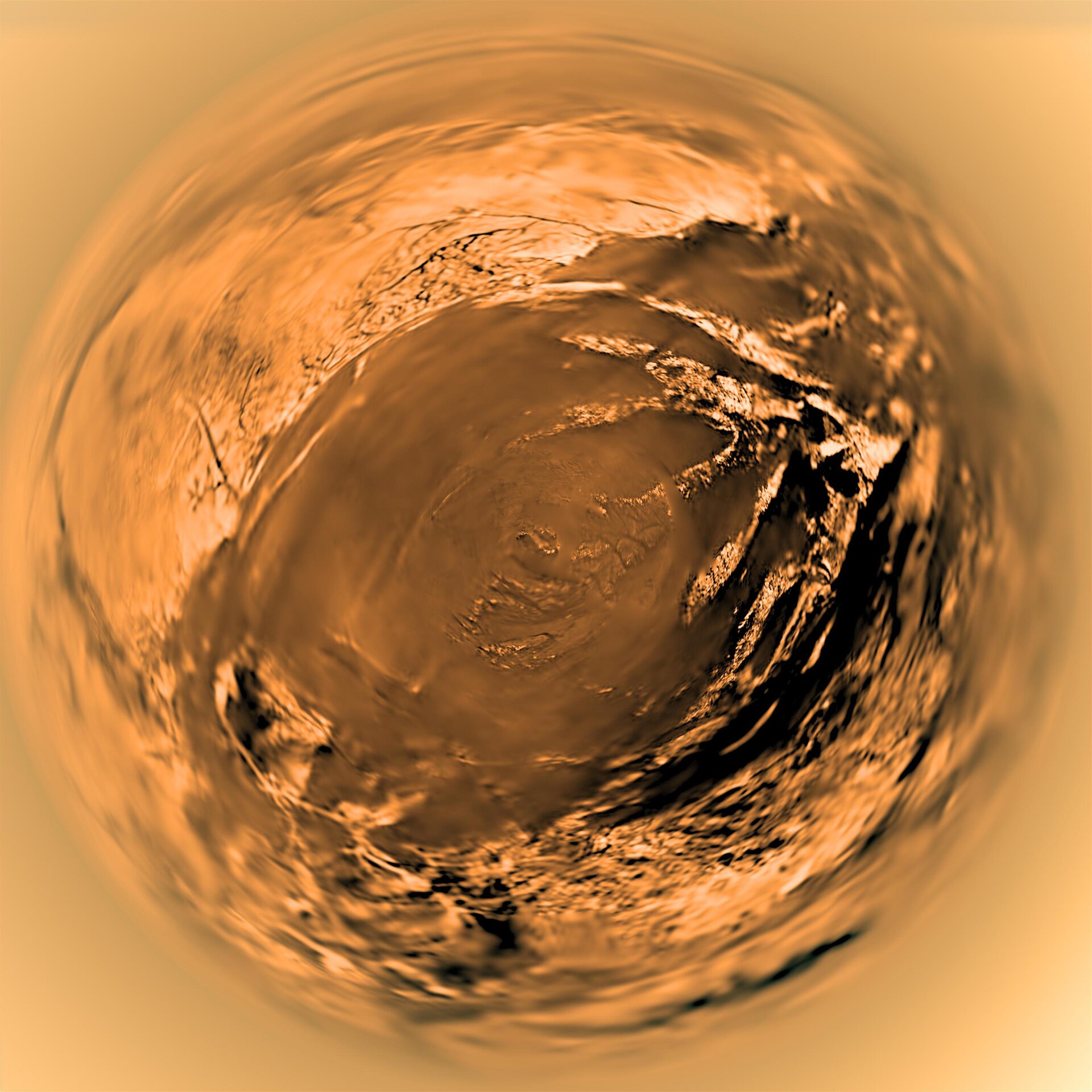 At first glance, this scene may look like a reptilian eye or a textured splash of orange paint, but it is actually a fish-eye view of Saturn’s moon Titan.

This image was taken as ESA’s Huygens probe, part of the international Cassini–Huygens mission, descended through Titan’s atmosphere before landing on the moon’s surface. This was the first landing ever performed in the outer Solar System, and it is still the most distant landing accomplished by any spacecraft or probe.

This landing took place 10 years ago this week, on 14 January 2005. At the moment this image was taken, Huygens was roughly five km above Titan’s surface.

The probe’s planned landing site looked a lot like a shoreline, so scientists were unsure whether it would touch down on solid ground or splash into a liquid sea. Rather than a splashdown or crash landing, it actually landed with more of a ‘splat’ in Titan’s mud, a sand-like material made up of grains of ice. The images sent back by Huygens also showed rounded cobbles of ice strewn across the area. These cobbles are likely made of hydrocarbon and water ice and are thought to be smoothed by flowing liquids.

Observations from the Cassini orbiter have identified several large seas and hundreds of liquid hydrocarbon lakes speckled across Titan’s polar regions. Scientists believe that Titan experiences a seasonal ebbing and flowing of liquid on its surface with intense bursts of torrential rainfall and flash floods — composed of methane and organic compounds — cut by drier periods during which this liquid evaporates. The lakes around the moon’s polar regions reflect this cycle, shrinking and growing depending on the season.

The Cassini–Huygens mission, launched in 1997 as a joint endeavour of ESA, NASA and Italy’s ASI space agency, is named after Giovanni Cassini and Christiaan Huygens, two prominent astronomers of the 17th century. Huygens observed the rings of Saturn and discovered Titan, which is the planet’s largest moon, in 1655. Cassini discovered four of Saturn’s moons – Iapetus, Rhea, Tethys, and Dione – between 1671 and 1684, extensively studied Saturn’s surface markings, and discovered the wide, dark gap in the planet’s rings that is now dubbed the Cassini Division.

This image is a stereographic (fish-eye) projection taken with the descent imager/spectral radiometer on Huygens.

More information and a high-res TIFF version of the image is available at the NASA JPL website.