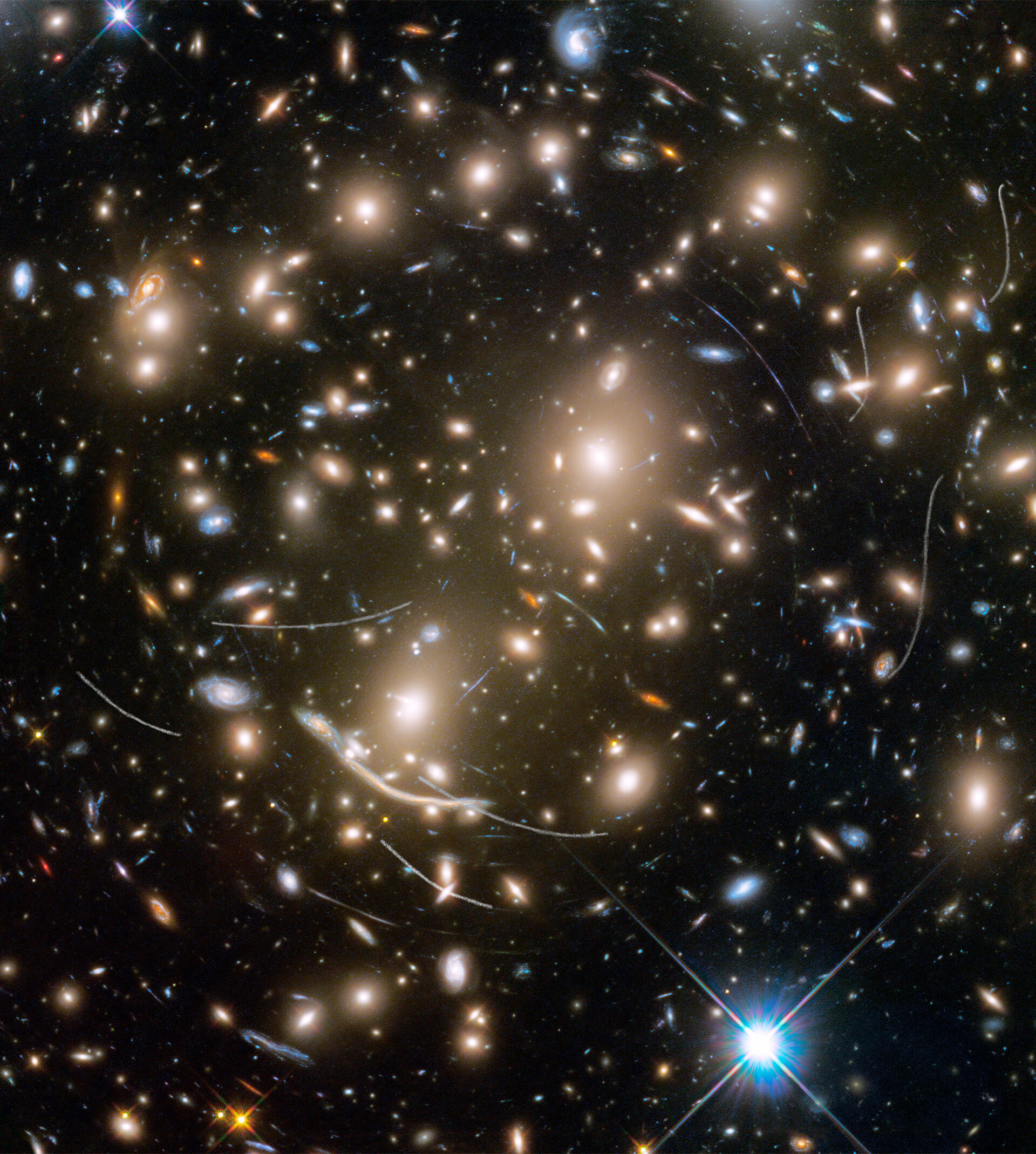 The stunningly beautiful galaxy cluster Abell 370 contains an astounding assortment of several hundred galaxies tied together by the mutual pull of gravity. Located approximately four billion light years away in the constellation Cetus, the Sea Monster, this immense cluster is a rich mix of a variety of galaxy shapes.

Entangled among the galaxies are thin, white trails that look like curved or S-shaped streaks. These are trails from asteroids that reside, on average, only about 260 million kilometres from Earth – right around the corner in astronomical terms. The trails appear in multiple Hubble exposures that have been combined into one image. Of the 22 total asteroid sightings for this field, five are unique objects. These asteroids are so faint that they were not previously identified.

The asteroid trails look curved due to an observational effect called parallax. As Hubble orbits around Earth, an asteroid will appear to move along an arc with respect to the vastly more distant background stars and galaxies. The motion of Earth around the Sun, and the motion of the asteroids along their orbits, are other contributing factors to the apparent skewing of asteroid paths.

All the asteroids were found manually, the majority by “blinking” consecutive exposures to capture apparent asteroid motion. Astronomers found a unique asteroid for every 10 to 20 hours of exposure time.

These asteroid trails should not be confused with the mysterious-looking arcs of blue light that are actually distorted images of distant galaxies behind the cluster. Many of these far-flung galaxies are too faint for Hubble to see directly. Instead, in a dramatic example of “gravitational lensing,” the cluster functions as a natural telescope, warping space and affecting light traveling through the cluster toward Earth.

The study was part of the Frontier Fields program and the image, assembled from several exposures taken in visible and infrared light, was first published on 6 November 2017.

Every year on 30 June, the global “Asteroid Day” event takes place to raise awareness about asteroids and what can be done to protect Earth from possible impact. The day falls on the anniversary of the Tunguska event that took place on 30 June 1908, the most harmful known asteroid related event in recent history. This year, ESA is co-hosting a live webcast with the European Southern Observatory packed with expert interviews, news on some of the most recent asteroid science results, and the truth about the dinosaurs. Watch 30 June at 13:00 CEST via www.esa.int/asteroidday.