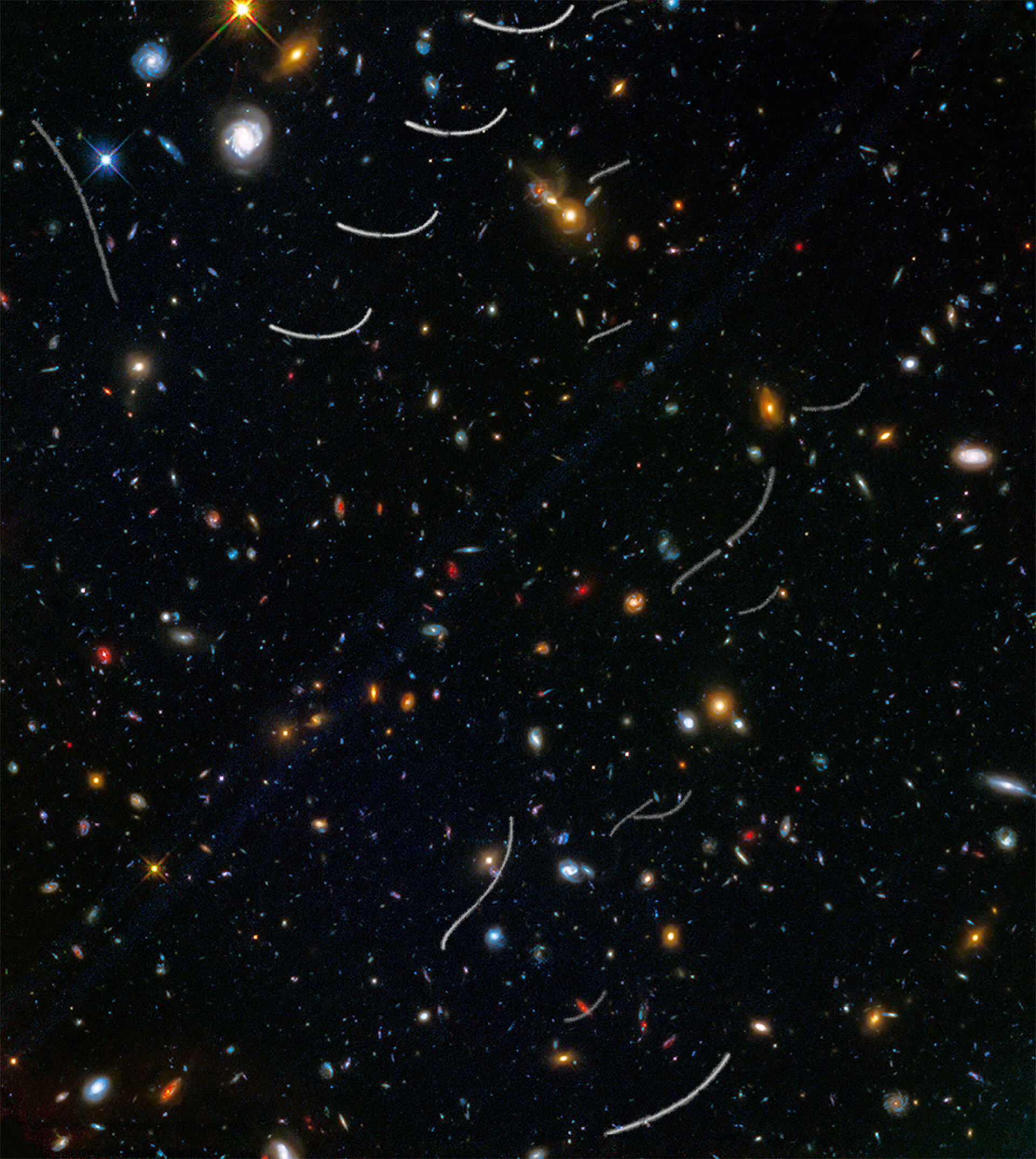 Galaxies – with a chance of asteroids

Have you ever been looking for one thing – at home or while browsing the web for example – and accidentally stumbled upon something else, but that is just as interesting? Something similar happened to the NASA/ESA Hubble Space Telescope a couple of years ago. While observing distant galaxies lying billions of light-years away, the telescope serendipitously spotted several asteroids, small Solar System objects that reside ‘only’ a few tens to hundreds of millions of kilometres from Earth.

Asteroids are mainly found in an area called the ‘main belt’, between the orbits of Mars and Jupiter. More than 700 000 asteroids have been identified to date, and predictions indicate that many more might be out there, each left over from the early days when planets were taking shape around the Sun.

The curved or S-shaped streaks in this image are trails created by asteroids as they move along their orbits. Rather than leaving one long trail, the asteroids appear in multiple Hubble exposures that have been combined into one image. The image shows a total of twenty asteroid trails, belonging to seven unique objects; five of these were new discoveries – too faint to be seen previously.

This week, a team of astronomers, planetary scientists and software engineers based at ESA and other research institutes has launched a new citizen science project: the Hubble Asteroid Hunter. The project was developed as part of the Zooniverse – the world’s largest and most popular platform for people-powered research.

The new project features a collection of archival Hubble images where calculations indicate that an asteroid might have been crossing the field of view at the time of the observation. Everyone can participate! By identifying the asteroids potentially present in these images and marking the exact position of their trails, you too can help the team improve the asteroid orbit determination and better characterise these objects. Precise knowledge of the orbit is particularly important for so-called near-Earth asteroids, those potentially flying close to our planet.

This image was taken as part of the Frontier Fields program, a Hubble initiative to push the telescope’s limits, observing six massive galaxy clusters – huge cosmic objects comprising hundreds of galaxies along with hot gas and dark matter – and exploiting their effect as a gravitational ‘lens’ on background sources to capture light from extremely distant galaxies.

While observing each cluster with one of the cameras on Hubble, the team also used a different camera, pointing in a slightly different direction, to photograph six so-called ‘parallel fields’. This maximised Hubble’s observational efficiency in doing deep space exposures, imaging a myriad of far away galaxies.

This picture, first published in 2017, shows the parallel field for the galaxy cluster Abell 370. It was assembled from images taken in visible and infrared light and contains thousands of galaxies, including massive yellowish ellipticals and majestic blue spirals. Much smaller, fragmentary blue galaxies are sprinkled throughout the field. The reddest objects are most likely the farthest galaxies, whose light has been stretched into the red part of the spectrum by the expansion of space.