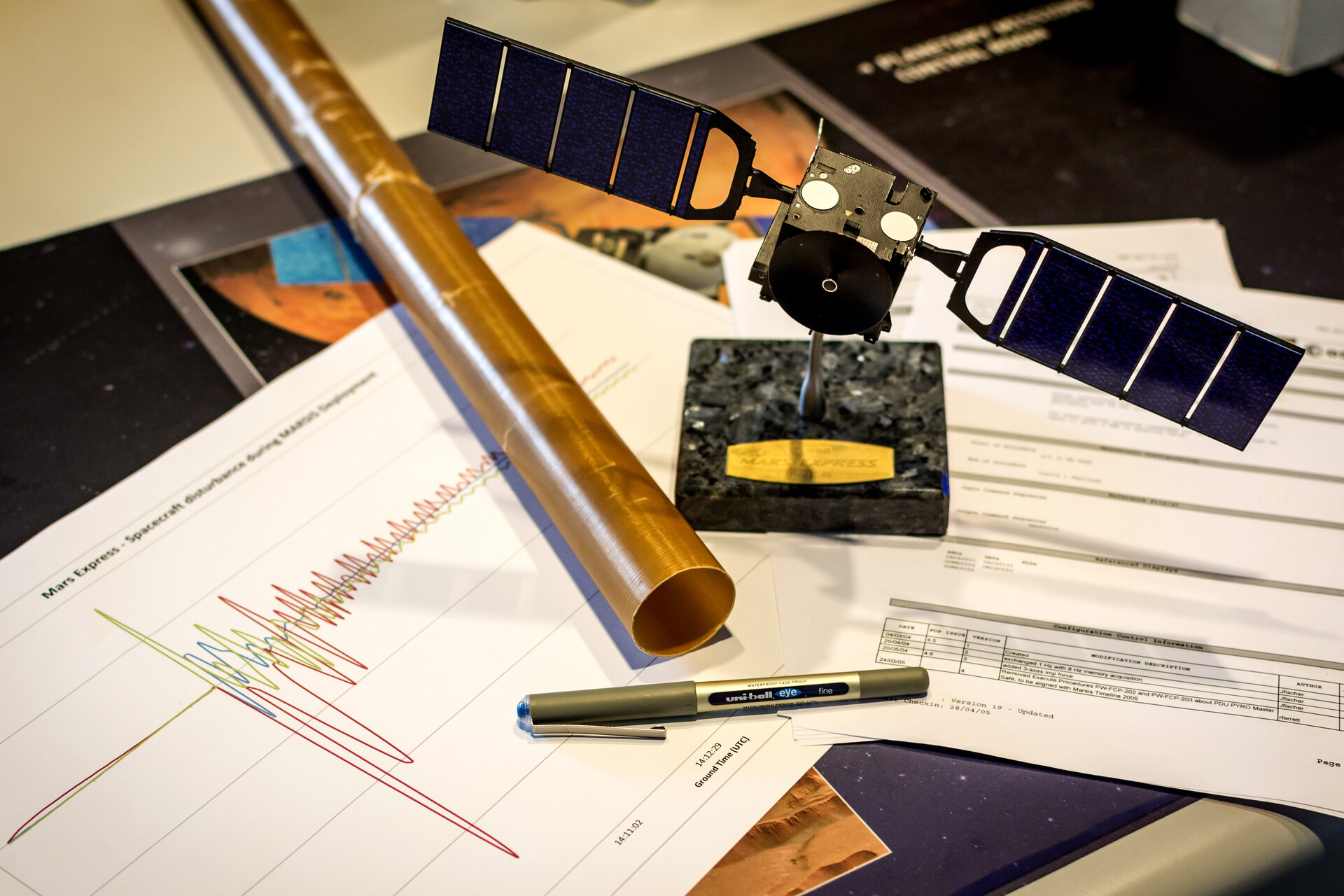 ESA’s Mars Express was launched in 2003, and for 15 years it has continued to thrill us with its insights into the Red Planet. Its latest announcement of a mass of liquid water under Mars’ southern ice cap captured attention around the globe, but this is a discovery that very nearly didn’t happen.

This image goes to prove the old saying “a picture paints a thousand words”, as it illustrates the thousands of days the giant MARSIS radar — the key instrument involved in this discovery — has spent orbiting Mars since its rocky deployment 14 years ago, the countless data it constantly streams back to Earth, and the many discoveries still being made.

Just before MARSIS (the Mars Advanced Radar for Subsurface and Ionosphere Sounding) was deployed, back in 2004, flight controllers discovered a problem.

The radar is made up of three ‘radar booms’ — two 20-metre long hollow cylinders, and one at 7-metres, all 2.5 centimetres in diameter and made of glass fibre and Kevlar. They began their journey to space folded up in a box like a concertina, and once the box was opened, all of the stored elastic energy from the bent booms was released like a jack-in-the-box, the intention being that they would then lock into a straight line.

Not long before MARSIS was due to be deployed, new and updated computer models showed that on release these long rods would swing back and forth with an even greater amplitude than was previously thought, potentially coming into close contact with the delicate parts of the Mars Express body and doing it serious damage. So, plans were made to get the spacecraft in a ‘robust’ mode before the deployment of each boom and while the glass fibre cylinders were extended.

After the first boom was released, flight controllers at ESA’s operations centre quickly realised something wasn’t quite right: 12 out of 13 of the boom segments had locked into place, but one — possibly number 10 — was not in position.

Analysis showed that prolonged storage in the cold conditions of outer space had affected the fibreglass and Kevlar material of the boom. So, mission teams decided to swing the 680 kg spacecraft into a position that would let the Sun heat the cold side of the boom. It was hoped that as the cold side expanded in the heat, the unlocked segment would be forced into place.

And it worked. Not long after the boom had been warmed up, operations teams on the ground began receiving messages that signalled all segments had locked into place.

Equipped with this new information, flight controllers ensured the second and third booms had their time in the Sun before they were released, and both were deployed without a hitch.

This image was taken by current Mars Express flight operators working at ESA’s operation centre, in celebration of the decisions made by their predecessors 14 years ago.

The squiggling graph shows what the Mars Express spacecraft ‘felt’ as the first MARSIS radar boom was released. It starts off with a near-flat line, signifying the spacecraft’s stable orbit around the Red Planet, but then it receives a violent jolt as the bolt holding the boom in place is let go. This shaking continues, gradually reducing over time as the spacecraft's attitude control system fights to dampen it out.

On top of the graph, next to the model of Mars Express, is a ‘flight spare’ piece of the fibreglass radar boom (with a pen for scale). This flight spare was made and kept as a backup, and really would have flown to space should something have happened to the original boom – as close to the real thing as it is possible to get!

Check out the full story on ESA's Rocket Science blog.