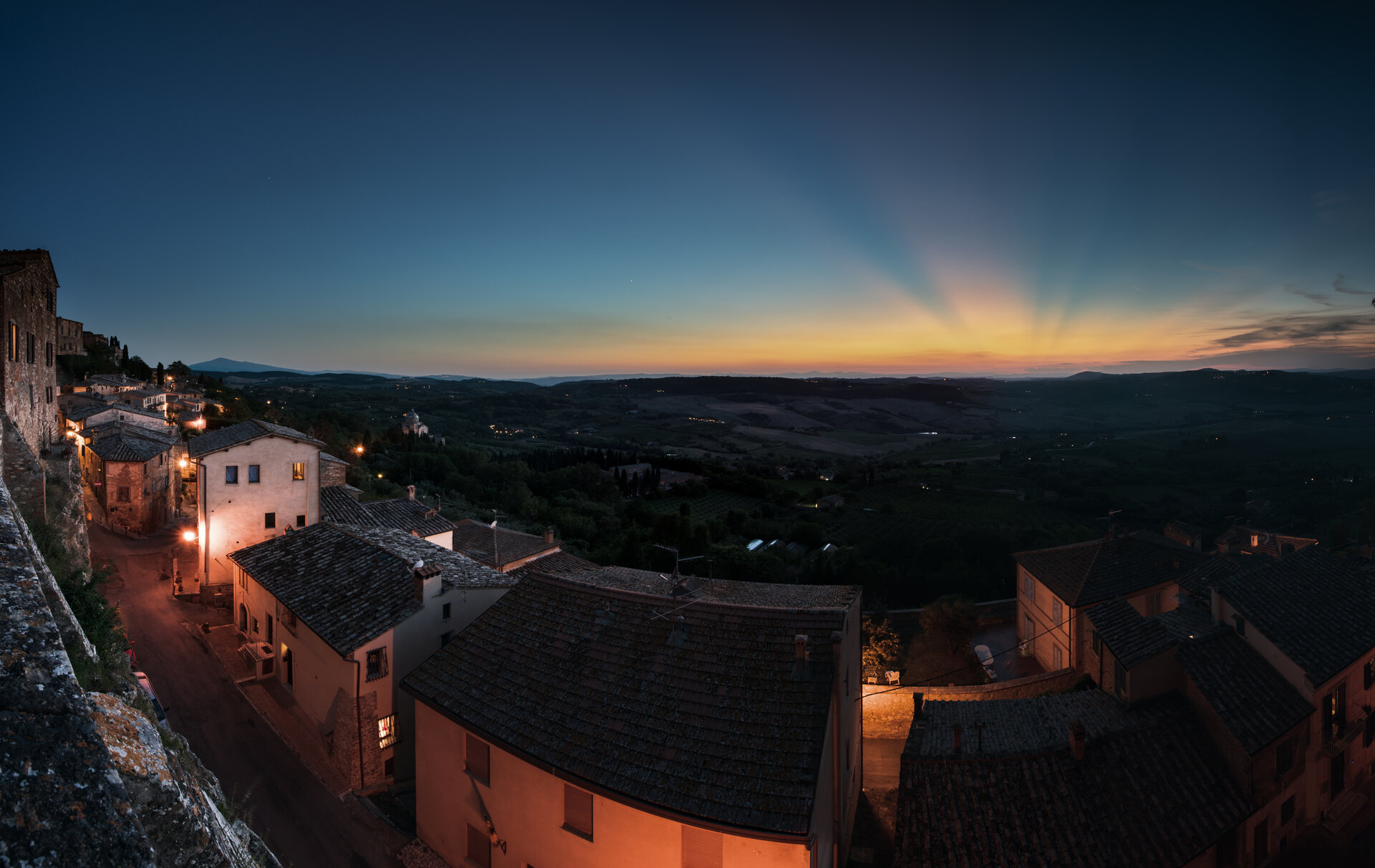 This panorama comprises five images showing the Sun setting over the medieval and Renaissance town of Montepulciano, southern Tuscany.

While the enormous ball of hot gas that is our star cannot be directly seen, its presence is suggested by the radiant streams of light emanating from below the horizon — called anticrepuscular rays, or antisolar rays.

Despite appearing to meet at a point just below the horizon, the rays are in fact near-parallel beams of sunlight. Similar to the way that parallel railway lines seem to converge at a point in the distance, this is a trick of perspective; while these rays of sunlight do eventually meet at the Sun, it is a great deal further away than they make it appear.

Earth’s atmosphere, made up of gases, particulates and clouds, has shaped the way humans have seen the Sun for as long as they have been able to perceive it, for example making the white-hot star appear yellow against a blue sky, masking the infinite blackness of space.

However, as soon as we get past this protective layer, the true effect of our raging Sun becomes apparent in the fast changing, and potentially harmful environment of space, where space weather rules.

Space weather refers to the environmental conditions in space as influenced by solar activity; besides emitting a continuous stream of electrically charged atomic particles, the Sun periodically emits billions of tonnes of material threaded with magnetic fields in colossal-scale ‘coronal mass ejections’.

These ‘solar sneezes’ can and have caused significant disruption to Earth’s protective magnetic bubble and upper atmosphere, affecting satellites in orbit, navigation systems, terrestrial power grids, and data and communication networks. A recent ESA study estimated the potential impact in Europe from a single, extreme space weather event could be about €15 billion.

For this reason, ESA is planning a new mission to monitor the Sun’s activity and provide early warnings. The spacecraft will be positioned between the Sun and Earth at a special position called the fifth Lagrange point. From here, it can observe the ‘side’ of our star, detecting rapidly changing solar activity before it reaches Earth, providing much-needed warning of extreme weather events, allowing measures to be taken to protect and minimise any possible damage to satellites in orbit or infrastructure on Earth.