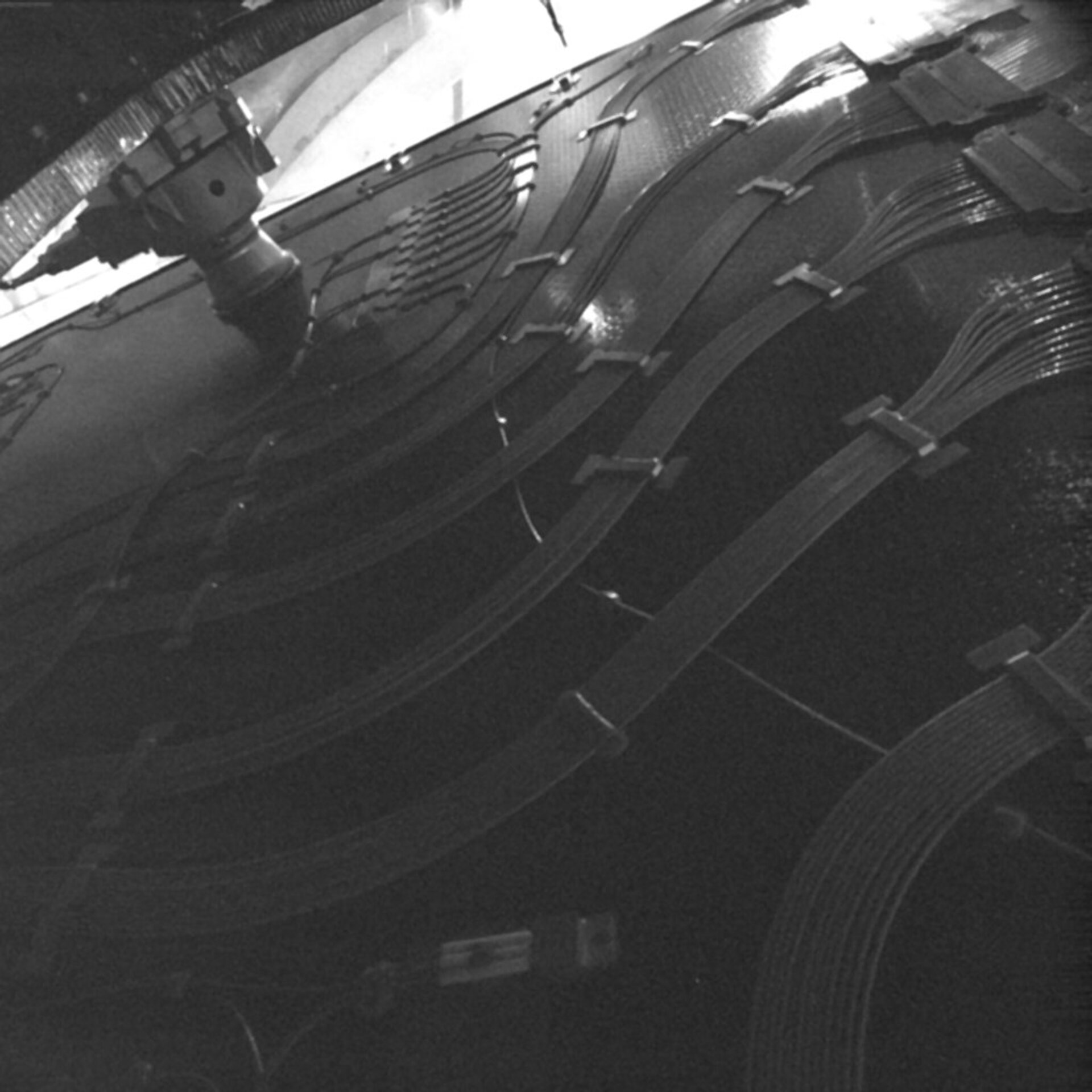 An unusual view of part of the BepiColombo spacecraft stack, taken by one of the monitoring cameras (or ‘selfie-cams’) fixed to the Mercury Transfer Module, MTM. The camera is looking up towards the solar array drive (top left) and the back side of the solar array closest to the ‘body’ of the spacecraft module. The image was taken in late September as part of launch preparations at Europe’s Spaceport in Kourou, French Guiana.

MTM is equipped with three monitoring cameras, which provide black-and-white snapshots in 1024 x 1024 pixel resolution. One of the monitoring cameras is positioned on the MTM with a field of view as shown in this image, looking up towards the Mercury Planetary Orbiter (MPO), which sits above. The MTM’s solar arrays are currently folded for launch, resulting in the presented image, but after their deployment the camera will have a clearer view. In particular, the MPO’s high-gain antenna will be in the field of view of the camera around one day after launch.

The other two cameras are placed on the other side of the module: one will look down the extended solar array of the MTM, the other towards the MPO, capturing glimpses of the medium-gain antenna once deployed and, later, of the magnetometer boom. Click here for a diagram showing the positions and example fields of views of each of the cameras.

The actual deployment of the solar arrays and antenna will be confirmed by telemetry data sent by the spacecraft after launch (click here for a timeline of activities immediately following launch). Later, the monitoring cameras will be switched on. The first sets of images are planned to be taken around 12 hours and 1.5 days after launch, and returned to Earth shortly after.

The monitoring cameras will be used ad-hoc during the cruise phase, notably during the flybys of Earth, Venus and Mercury.

While the MPO is equipped with a high-resolution scientific camera, this can only be operated after separating from the MTM upon arrival at Mercury in late 2025 because, like several of the 11 instrument suites, it is located on the side of the spacecraft fixed to the MTM during cruise. Nonetheless, it will be possible to operate or partially operate as many as eight of the 11 instruments on the MPO during the flybys, along with three of the five instrument packages onboard JAXA’s Mercury Magnetospheric Orbiter. This will afford some unique data collection opportunities at Venus, for example.

BepiColombo is a joint endeavour between ESA and JAXA, the Japan Aerospace Exploration Agency. It is the first European mission to Mercury, the smallest and least explored planet in the inner Solar System, and the first to send two spacecraft to make complementary measurements of the planet’s dynamic environment at the same time.

Launch is scheduled for 01:45 GMT on 20 October. Check for updates and follow the launch live via esa.int/live. When available, images from the monitoring cameras will be published via esa.int/spaceinimages, and on Twitter via @ESA_MTM in the first instance.