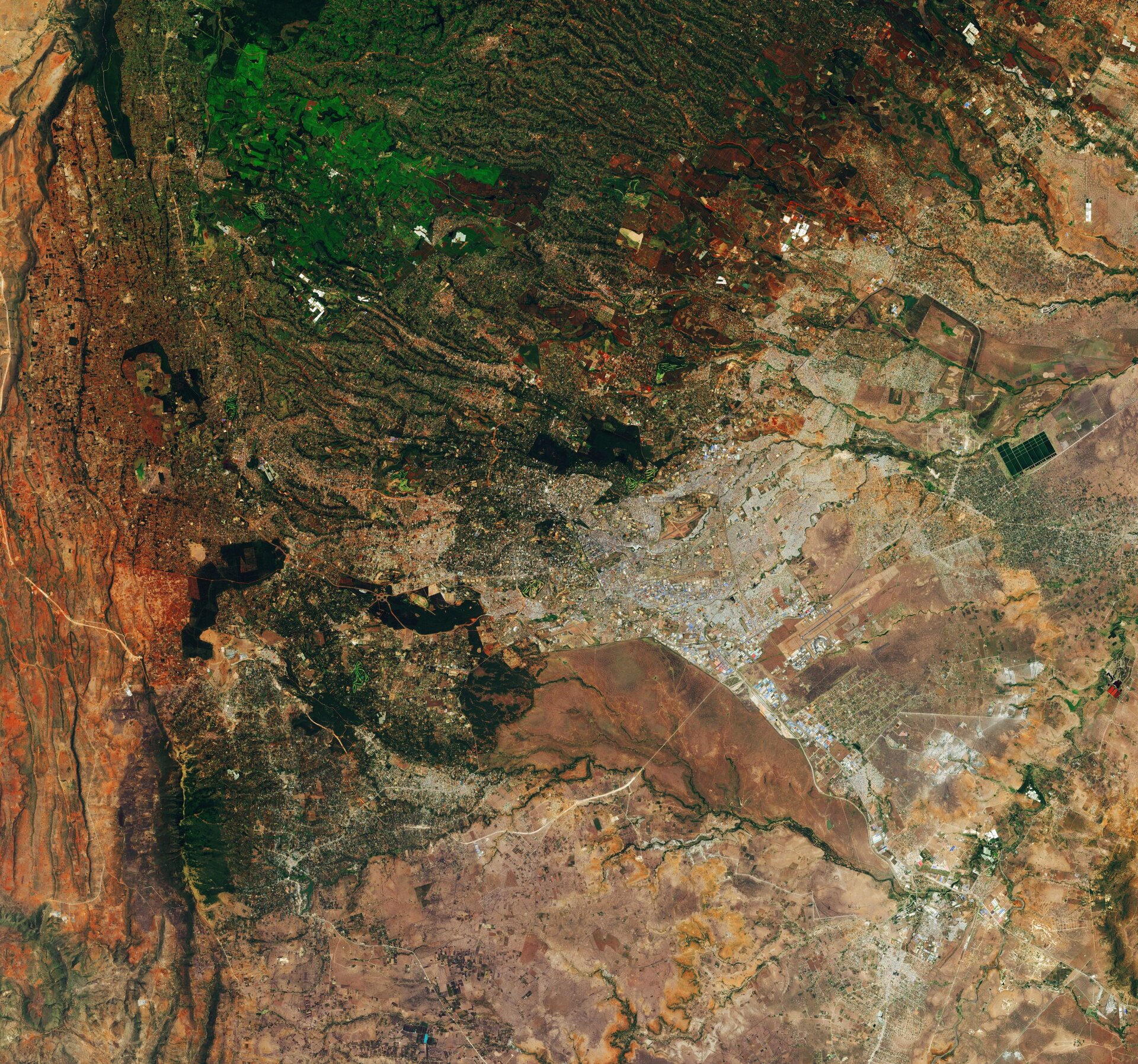 The Copernicus Sentinel-2 mission takes us over Nairobi, one of the fastest growing cities in East Africa.

The population of Nairobi has increased significantly in the last 30 years, with rural residents flocking to the city in search of employment. The city, visible in the centre of the image, now has a population of over three million, with the vast majority spread over 200 informal settlements.

Kibera, which can be seen as a light-coloured patch at the south-western edge of the city, is considered one of the largest urban slums in Nairobi. Most residents live in small mud shacks with poor sanitation, a lack of electricity and limited access to clean water.

While migration provides economic benefits to the city, it also creates environmental challenges. Owing to its urbanisation, the city has spread into green spaces such as the nearby parks and forests. In this image, the densely populated area is contrasted with the flat plains of Nairobi National Park, directly south of the city. The 117 sq km of wide-open grass plains is coloured in light-brown. The park is home to lions, leopards, cheetahs and has a black rhino sanctuary.

The dark patches in the image are forests. The Ngong Forest, to the west of the city, includes exotic and indigenous trees, and hosts a variety of wild animals including wild pigs, porcupines, and dik-diks.

To the north of the city,  the dark Karura Forest is visible. The 1000 hectare urban forest features a 15-m waterfall, and hosts a variety of animals including bush pigs, bushbucks, suni and harvey’s duiker, as well as some 200 bird species.

Although Africa is responsible for less than 5% of global greenhouse-gas emissions, the majority of the continent is directly impacted by climate change. Rapid population growth and urbanisation also exposes residents to climate risks.

On 14 March 2019, the first regional edition of the One Planet Summit took place at the UN Compound, which is in the north of the city. The One Planet Summit, part of the UN Environment Assembly, focuses on protecting biodiversity, promoting renewable energies and fostering resilience and adaptation to climate change.

This image, which was captured on 3 February 2019, is also featured on the Earth from Space video programme.

As delegates gather in Nairobi for the UN Environment Assembly, ESA is saddened by the news of the Ethiopian Airlines accident. Lives lost included those working for organisations also dedicated to achieving a better world for all and who were travelling to the assembly.

Our thoughts are with the families, colleagues and friends of those affected.