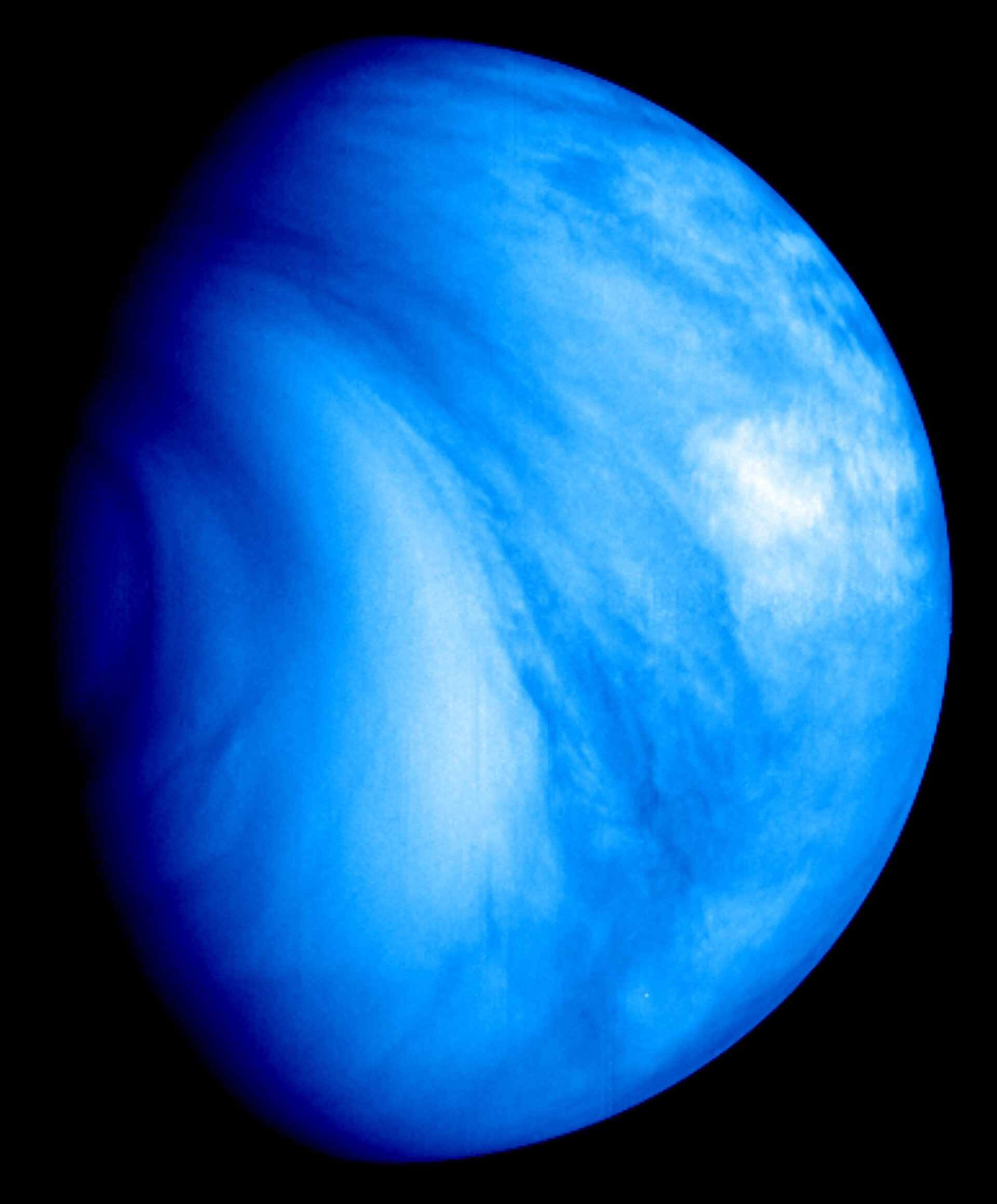 Appearances can be deceiving. This thick, cloud-rich atmosphere rains sulphuric acid and below lie not oceans but a baked and barren lava-strewn surface. Welcome to Venus.

The second planet from the Sun is often coined Earth’s ‘evil twin’ on account of it being almost the same size but instead plagued with a poisonous atmosphere of carbon dioxide and a sweltering 470ºC surface. Its high pressure and temperature is hot enough to melt lead and destroy the spacecraft that dare to land on it. Thanks to its dense atmosphere, it is even hotter than planet Mercury, which orbits closer to the Sun.

ESA’s Venus Express studied the planet from orbit between 2006 and 2014, providing the most in-depth studies of its atmospheric circulation to date. This false-colour image was taken in ultraviolet light with the Venus Monitoring Camera on 23 July 2007. It shows a view of the southern hemisphere from equator (right) to the pole (left) from a distance of 35 000 km from the surface of the planet.

Scientists think that Venus once looked a lot like Earth, but underwent an irreversible climate change that is often used as an extreme example of what happens in a runaway greenhouse effect.

The main source of heat in the Solar System is the Sun’s energy, which warms a planet’s surface up, and then the planet radiates energy back into space. An atmosphere traps some of the outgoing energy, retaining heat – the so-called greenhouse effect. It is a natural phenomenon that helps regulate a planet’s temperature. If it weren’t for greenhouse gases like water vapour, carbon dioxide, methane and ozone, Earth’s surface temperature would be about 30 degrees cooler than its present +15ºC average.

Over the past centuries, humans have altered this natural balance on Earth, strengthening the greenhouse effect since the dawn of industrial activity by contributing additional carbon dioxide along with nitrogen oxides, sulphates and other trace gases and dust and smoke particles into the air. The long-term effects on our planet include global warming, acid rain and the depletion of the ozone layer. The consequences of a warming climate are far-reaching, potentially affecting fresh water resources, global food production and sea level, and triggering an increase in extreme-weather events.

There is no human activity on Venus, but studying its atmosphere provides a natural laboratory to better understand a runaway greenhouse effect. At some point in its history, Venus began trapping too much heat. It was once thought to host oceans like Earth, but the added heat turned water into steam, and in turn, additional water vapour in the atmosphere trapped more and more heat until entire oceans completely evaporated. Water vapour is still escaping from Venus’ atmosphere and into space today.

In the very long term – billions of years into the future – a ‘greenhouse Earth’ is an inevitable outcome at the hands of the aging Sun. Our once life-giving star will eventually swell and brighten, injecting enough heat into Earth’s delicate system that it will eventually become Venus’ true twin.

Read more here about the diverging histories of Venus, Earth and Mars and how studying our neighbour planets can teach us more about our own.