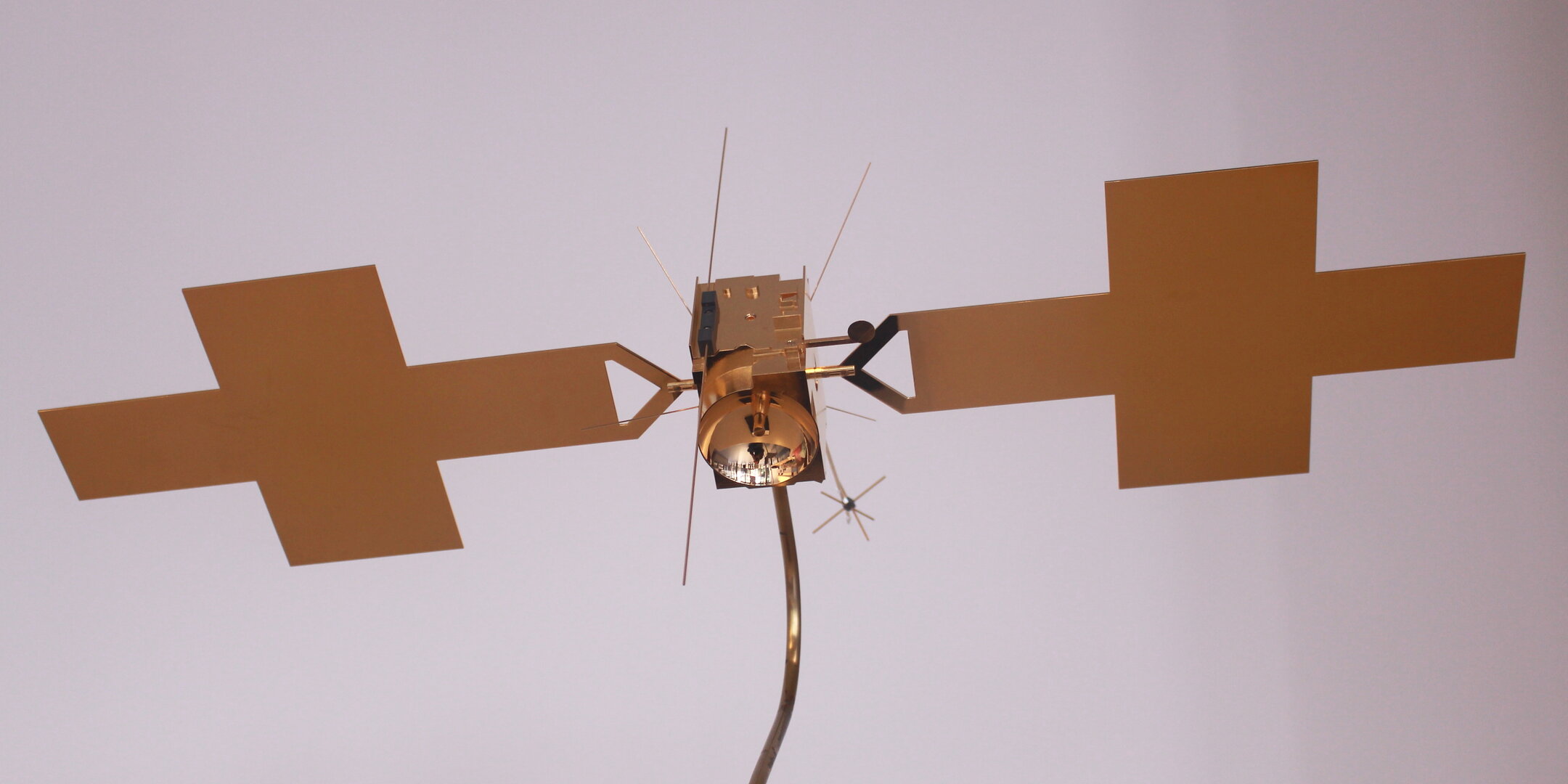 In a decade’s time, an exciting new visitor will enter the Jovian system: ESA’s Jupiter Icy Moons Explorer, or Juice. As its name suggests, the mission will explore Jupiter and three of its largest moons – Ganymede, Callisto and Europa – to investigate the giant planet’s cosmic family and gas giant planets in general.

Juice is planned for launch in 2022, and its instruments are currently being perfected and calibrated so they are ready to start work once in space. This image shows one of the many elements involved in this calibration process: a miniature gold-plated metallic model of Juice used to test the spacecraft’s antennas.

Juice will carry multiple antennas to detect radio waves in the Jupiter system. These antennas will measure the characteristics of the incoming waves, including the direction in which they are moving and their degree of polarisation, and then use this information to trace the waves back to their sources. In order to do this, the antennas must work well regardless of their orientation to any incoming waves – and so scientists must figure out and correct for the antennas’ so-called ‘directional dependence’.

This shiny model was used to perform a set of tests on Juice’s Radio and Plasma Wave Instrument (RPWI) last year. It was submerged in a tank filled with water; an even electric field was then applied to the tank, and the model was moved and rotated with respect to this field. The results revealed how the antennas will receive radio waves that stream in from different directions and orientations with respect to the spacecraft, and will enable the instrument to be calibrated to be as effective as possible in its measurements of Jupiter and its moons.

Similar tests, which are technically referred to as rheometry, were conducted in the past for spacecraft including the NASA/ESA/ASI Cassini-Huygens mission to Saturn (which operated at Saturn between 2004 and 2017), NASA’s Juno spacecraft (currently in orbit around Jupiter), and ESA’s Solar Orbiter (scheduled for launch in early 2020 to investigate the Sun up close).

The test performed for Juice posed a few additional hurdles – the model’s antennas were especially small and needed to be fixed accurately onto the model’s boom, which required scientists to create a special device to adjust not only the antennas, but also the boom itself.

The model was produced at a 1:40 scale, making each antenna 62.5 millimetres long from tip to tip; scaled up, the antennas will be 2.5 metres long on Juice. The main spacecraft parts modelled here include the body of the probe itself, its solar panels, and its antennas and booms. The model has an overall ‘wingspan’ of 75 centimetres across its solar panels. The photo also shows a spacecraft stand, which extends out of the bottom of the frame. The gold coating ensured that the model had excellent electric conducting properties, and reacted minimally with the surrounding water and air during the measurements.

Meanwhile, the assembly of the Juice flight model has started in September, with the delivery of the spacecraft's primary structure, followed by integration of the propulsion system.

This model of Juice was built by the Technical University of Dresden, Germany, and the tests were performed by the Austrian Academy of Sciences’ Space Research Institute in Graz, Austria, as part of a project financed by the Austrian Research Promotion Agency (FFG). The lead scientist for the calibration effort was Georg Fischer of the Space Research Institute, also using computer simulations performed by Mykhaylo Panchenko.