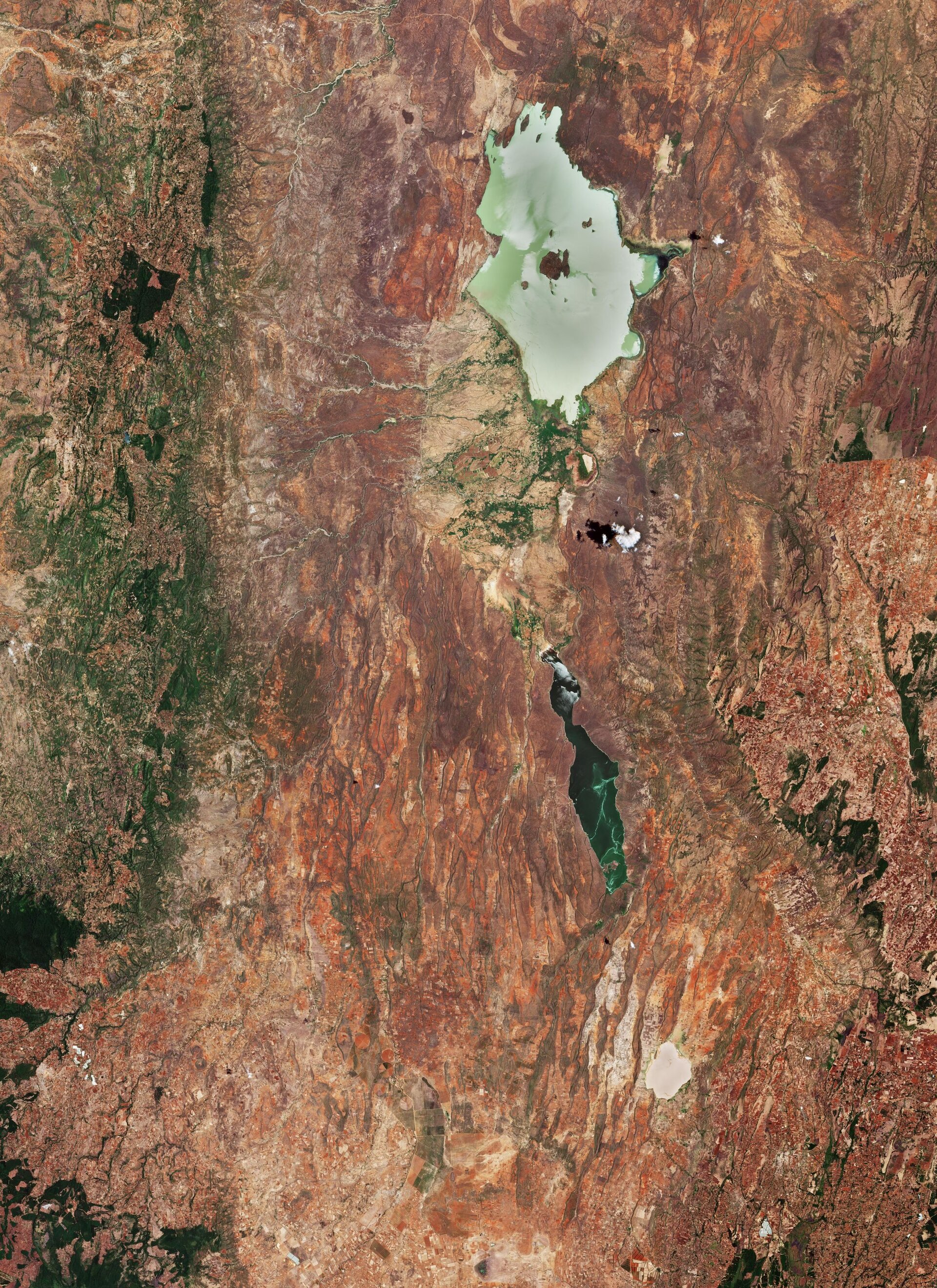 The Copernicus Sentinel-2 mission takes us over part of the Great Rift Valley, Kenya.

This valley is part of the Gregory Rift, an eastern branch of the East African Rift, which is being caused by the separation of the Somali plate from the Nubian plate. Major tectonic and volcanic activity have shaped the distinctive landscape of the Great Rift Valley which runs through Kenya from north to south.

The dramatic landscape contains the Cherangani Hills and forests to the west, a chain of volcanoes, of which some are still active, escarpments and jewel-like lakes.

Lake Baringo, one of the most northern of the Kenyan Rift Valley lakes, is visible at the top of the image. With a surface area of 130 sq km and an elevation of around 970 m, the lake has an average depth of around 5 m and it is one of the two freshwater lakes in the Rift Valley – the other being Lake Naivasha (not visible).

This lake has no visible outlet; its waters are thought to seep into lavas at its northern end – where the rocky shore contrasts with the alluvial flat on its southern border.

Baringo is dotted with several small islands. Its largest is visible in the centre of the lake and is called Ol Kokwe (also known as the Meeting Place). It is an extinct volcano with several hot springs. A great variety of birds inhabit Lake Baringo, which is also home to hippopotamuses and crocodiles.

South of Lake Baringo lies Lake Bogoria – a saline, alkaline lake. The long and narrow lake has an area of around 30 sq km and is around 10 m deep. Lake Bogoria provides refuge for the lesser flamingo, with a population of around 1 to 1.5 million, and also supports more than 300 waterbird species. The lake is a designated Ramsar site and is also part of the Lake Bogoria National Reserve.

The lake is famous for geysers and hot springs along the bank of the lake – some of which can erupt up to 5 m high. The lake’s stable water level makes it highly important during times of drought.

Copernicus Sentinel-2 is a two-satellite mission to supply the coverage and data delivery needed for Europe’s Copernicus programme. The mission’s frequent revisits over the same area and high spatial resolution allow changes in inland water bodies to be closely monitored.

This image, captured on 13 March 2019, is also featured on the Earth from Space video programme.