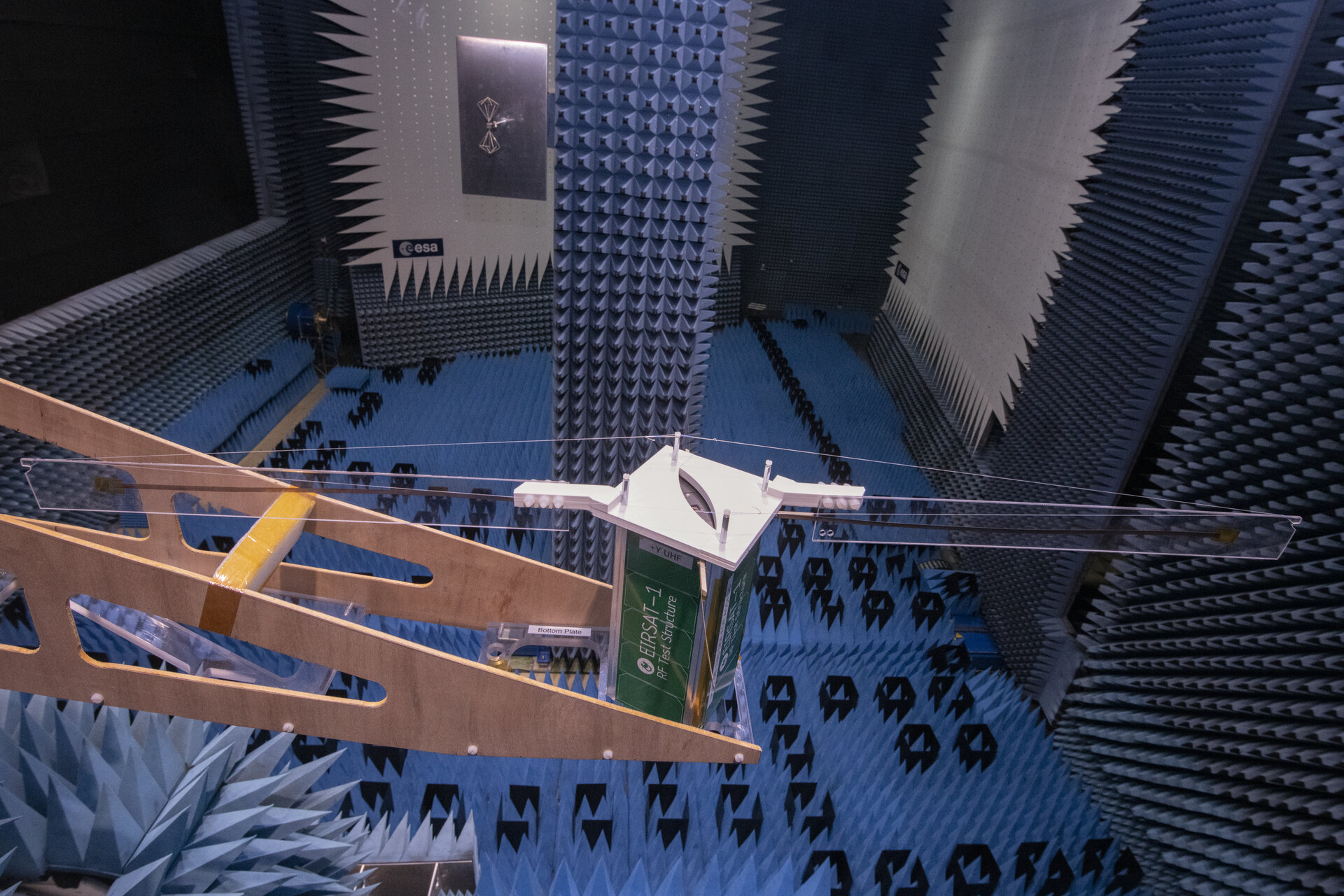 Educational Irish Research Satellite 1, or EIRSAT-1 for short, is being built by students and staff of University College Dublin, who are participating in ESA Education’s Fly Your Satellite! programme.

At just 22 by 10 by 10 cm, the miniature EIRSAT-1 is smaller than a shoebox but is still equivalent in complexity to a standard space mission.

Normally the EIRSAT-1 student team would have joined the test campaign in person, but current Covid-19 restrictions made this impossible. Instead the team delivered their self-made Antenna Deployment Module (ADM) plus a mock-up of the satellite body, along with detailed test preparation procedures.

“Very often when antenna performance is assessed on a stand-alone basis, the results are not necessarily representative,” explains Peter de Maagt, heading ESA’s Antenna & Sub-mm Waves section. “The body of a satellite can make an enormous impact, so it’s really important to verify the antenna performance in this way.”

ESA’s metal-walled Hybrid European Radio Frequency and Antenna Test Zone (Hertz) at the Agency’s ESTEC technical centre in the Netherlands, shut off from all external influences for radio testing.

Hertz’s hybrid nature makes it unique: the facility can assess radio signals from antennas either on a local ‘near-field’ basis or as if the signal has crossed thousands of kilometres of space, allowing it to serve all kinds of satellites and antenna systems.

“We thought it was important to have some ambitious science payloads, beyond simply achieving a working satellite,” says David Murphy, systems engineer for the project. “So EIRSAT-1 carries an advanced gamma ray detector. Developed through an ESA-funded project, this GMOD ‘Gamma-ray Module’ detects gamma ray bursts from deep space as well as ‘terrestrial gamma flashes’ originating within the atmosphere, linked to lightning strikes.

“Standard gamma ray detectors still rely on vacuum tubes; by comparison the compact, silicon-based GMOD is the equivalent of updating from a CRT to flatscreen TV.”

“These black and white coatings have already been tested for deep space,” Murphy explains, “but EIRSAT-1 will gather the first data on their effectiveness in the low-Earth orbit environment, including exposure to highly-erosive atomic oxygen.”

The EIRSAT-1 team also developed their own highly compact ADM for antenna deployment. This deploys VHF and UHF antennas from a structure just 7 mm high, positioned on one end of the nanosatellite using a  simple ’burn wire’ release mechanism.

Lána Salmon, part of the EIRSAT-1 communications team adds: “Having previously studied the performance of the ADM, both outdoors and in small anechoic chambers, this test campaign is a crucial next step which allows the study of the ADM, with an attached representative structure, in a chamber built to conduct precise measurements of satellite antenna performance.”

ESA antenna engineer Alfredo Catalani was the person following the team’s procedures: “The antennas needed tuning to very precise frequencies, by cutting them to their final lengths. Because the antennas are made to operate in weightlessness, they come with supports to safely extend in Earth gravity – made of plastic to avoid any potential radio interference, for the same reason a wooden support holds the mock-up satellite in place. Similarly, we also used an optical transducer to feed RF signals to the antennas, rather than a metal connector.”

EIRSAT-1’s individual payloads have already been qualified for space at ESA Education’s CubeSat Support Facility at the ESEC-Galaxia facility at Transinne in Belgium. As a next step a prototype ‘Qualification Model’ will be tested there later this year, with a flight model set to follow at the end of the year, ahead of a planned delivery to ESA in the first half of 2021.