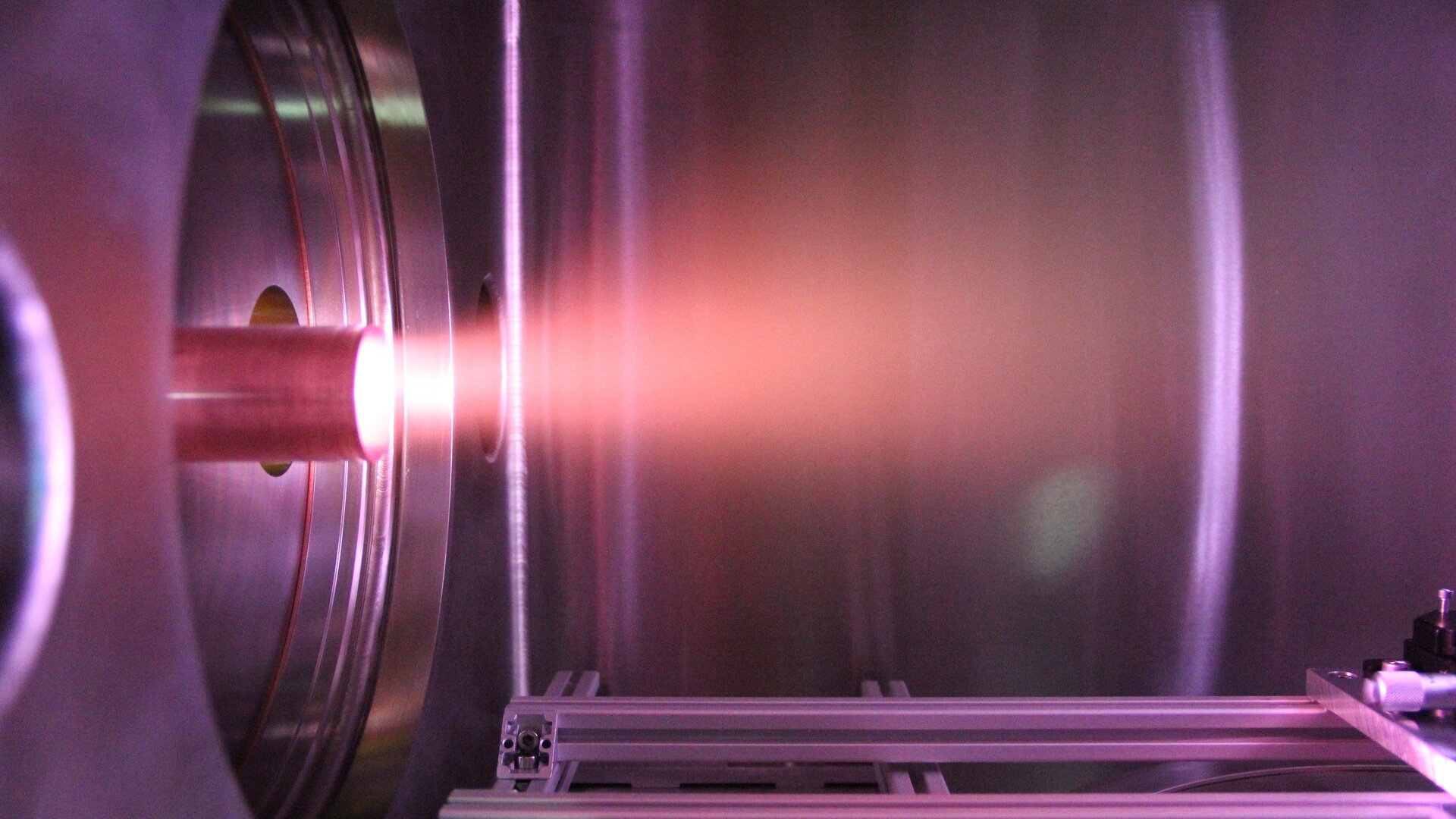 ESA has begun operating a new simulator that fires a laser to generate a variety of oxygen normally encountered only in low orbits – and known to eat away at satellite surfaces.

The new facility is housed in the Materials and Electrical Components Laboratory, one of a suite of labs at ESA’s technical centre in the Netherlands, devoted to simulating every aspect of the space environment.

This latest addition focuses on reproducing a phenomenon that remained unknown during the first decades of the space age. It was when early Space Shuttle flights returned from low orbit in the early 1980s that engineers got a shock: the spacecraft’s thermal blankets had been severely eroded.

The culprit turned out to be highly reactive atomic oxygen – individual atoms of oxygen at the fringes of the atmosphere, the result of standard oxygen molecules of the kind found just above the ground being broken apart by powerful ultraviolet radiation from the Sun.

Today, all missions below about 1000 km need to be designed to resist atomic oxygen, such as Europe’s Earth-watching Sentinel satellites. The precise extent of atomic oxygen effects varies with the 11 years of the solar cycle.

ESA’s previous atomic oxygen generator, ATOX, was built to study materials for the International Space Station, but was coming to the end of its life.

“It’s been a challenge to design and build because what we have to do is reproduce something that simply does not exist on Earth.”

There are only a handful of facilities around the globe that can reliably generate atomic oxygen for this kind of testing.

LEOX generates atomic oxygen at energy levels that are equivalent to orbital speed – 7.8 km/s – to simulate the space environment as closely as possible. It can also test at a higher flow, saving time and money for testing.

Purified molecular oxygen is injected into a vacuum chamber with a pulsing laser beam focused onto it. With a purple flash each time the laser is fired, the oxygen is converted into a hot plasma whose rapid expansion is channelled along a conical nozzle. It then dissociates to form a highly energetic beam of atomic oxygen.

To work reliably during a test typically lasting hours, the laser timing must stay precise to millisecond scale, and directed to an accuracy measured in thousandths of a millimetre.

“LEOX incorporates various improvements over its predecessor, including the fact that the facility incorporates a mass spectrometer, so we can really validate moment by moment as a test is going on that we are indeed producing pure atomic oxygen and avoiding any contamination.

“In addition, it is modular, allowing us to transfer a sample from LEOX to other laboratory equipment, such as our X-ray photospectrometer (XPS) to measure the first few nanometres of the sample’s surface – all without taking it out of vacuum.

“Applying the XPS to the test samples we’ve worked on has confirmed the new facility is working well, because at microscopic scale they look just like materials we have actually retrieved from orbit in the past, such as from the Hubble Space Telescope, the Eureca retrievable carrier and the Space Station itself.”

LEOX will now be used to test candidate materials for a wide variety of low-orbiting missions, including those coming as close to the top of the atmosphere as possible, and potentially missions to other worlds, such as ESA’s Juice mission to Jupiter– the top of Ganymede’s atmosphere is theorised to contain atomic oxygen, too.