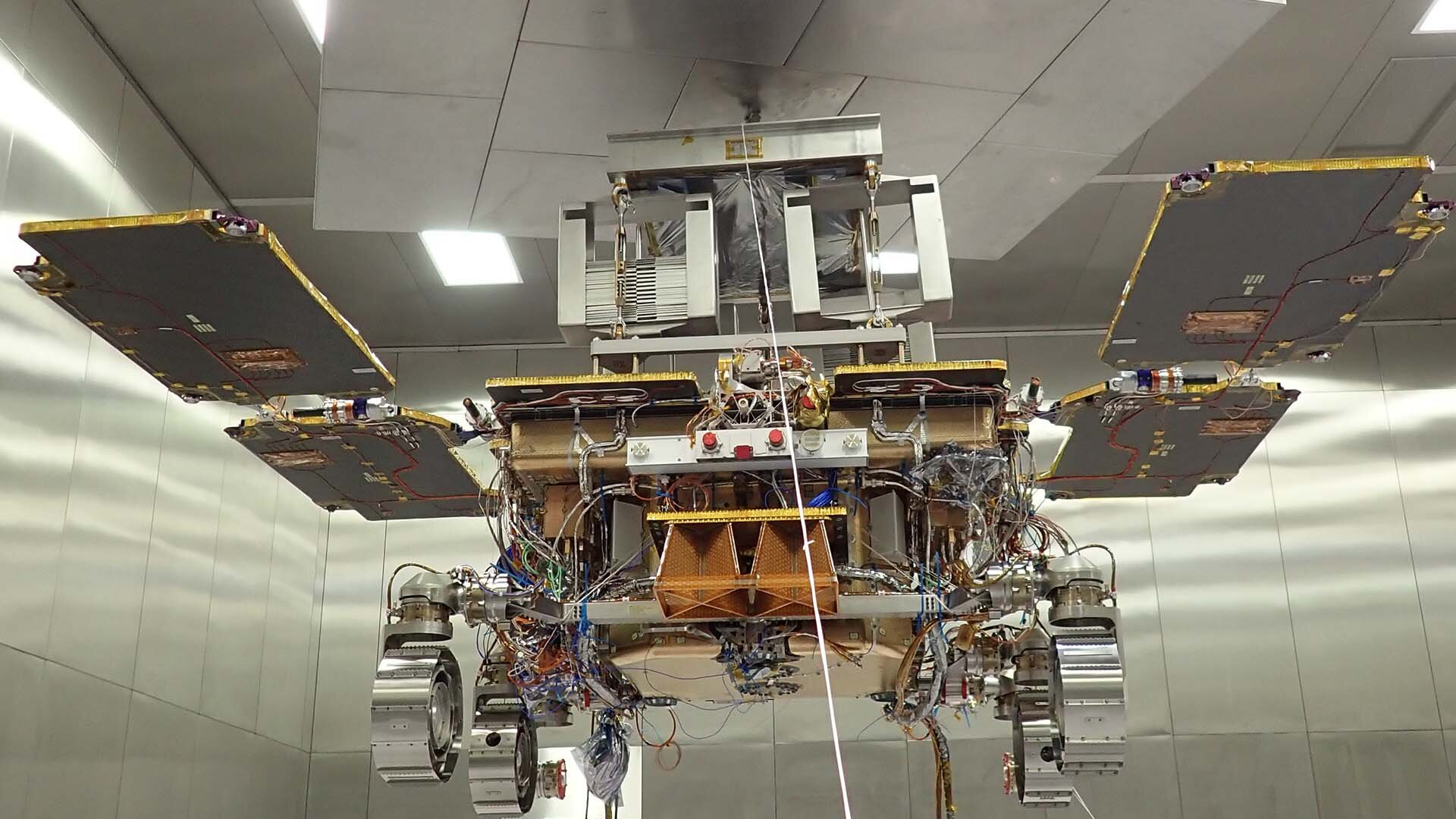 As Mars exploration prepares for a rebirth, a European rover tunes up its gear for the challenges ahead.

Tomorrow, 23 July, ESA and dozens of industrial partners will assess the readiness of the ExoMars robotic explorer, named Rosalind Franklin, for a trip to the Red Planet in 2022. The European rover will drill down to two metres into the martian surface to sample the soil, analyse its composition and search for evidence of life buried underground.

The rover successfully proved that it is fit to endure the martian conditions during the environmental test campaign earlier this year in Toulouse, France. This laboratory on wheels withstood temperatures as low as –120°C and less than one hundredth of Earth’s atmospheric pressure to simulate the extremes of its journey through space and on the surface of Mars.

During environmental tests, disbonding was detected between the solar panels and the hinges that hold and fold the outer wings for the journey to Mars.  Mechanical fasteners have been added at the Airbus facilities in Stevenage, in the UK, to address this critical issue. The new set of panels is already at Thales Alenia Space in Turin, Italy, where the rover awaits power up at the beginning of August 2020.

The disruptions caused by the coronavirus pandemic have added new obstacles for industry across Europe on the road to Mars. Parachute and interface tests are expected to resume in October.

New missions to Mars launch from a broad range of nations – while the United Arab Emirates’ historic first mission to Mars lifted off from Japan last Sunday, China is preparing to launch tomorrow its first rover to Mars, known as Tianwen-1. NASA’s Mars 2020 mission is set to take off with the Perseverance rover onboard next week, on July 30.

These missions focus on the search for evidence of life on the Red Planet and a better understanding of how Earth and Mars evolved so differently.

“We hope that ESA’s Rosalind Franklin rover will help write a new page in Mars exploration by allowing us to study organic molecules on the spot,” says Jorge Vago, ESA’s ExoMars project scientist.

Dr Rosalind Franklin, the prominent scientist behind the discovery of the structure of DNA, one of life’s most important molecules, would have been 100 years old on 25 July this year. Her niece, also named Rosalind Franklin in her memory, points out that the X-ray diffraction expert “never conceived science as a race of competitors.”

After a visit to ESA’s technical centre in the Netherlands last year, Rosalind believes that her aunt would have loved the ExoMars team spirit. “The work of ESA engineers on the rover struck me – they really do it for the results, not for themselves. This is what Rosalind Franklin was all about: commitment and dedication to science,” said Rosalind from her home in California, US.

A series of talks and events is taking place around the globe this week to celebrate the centenary of this “woman of integrity who went after scientific discovery for the betterment of humankind”, as her niece describes her. The legacy of the scientist lives on today, and the ExoMars rover will help leave her symbolic footprint on Mars in 2023.

The ExoMars rover is part of the ExoMars programme, a joint endeavour between ESA and the Russian State Space Corporation, Roscosmos.