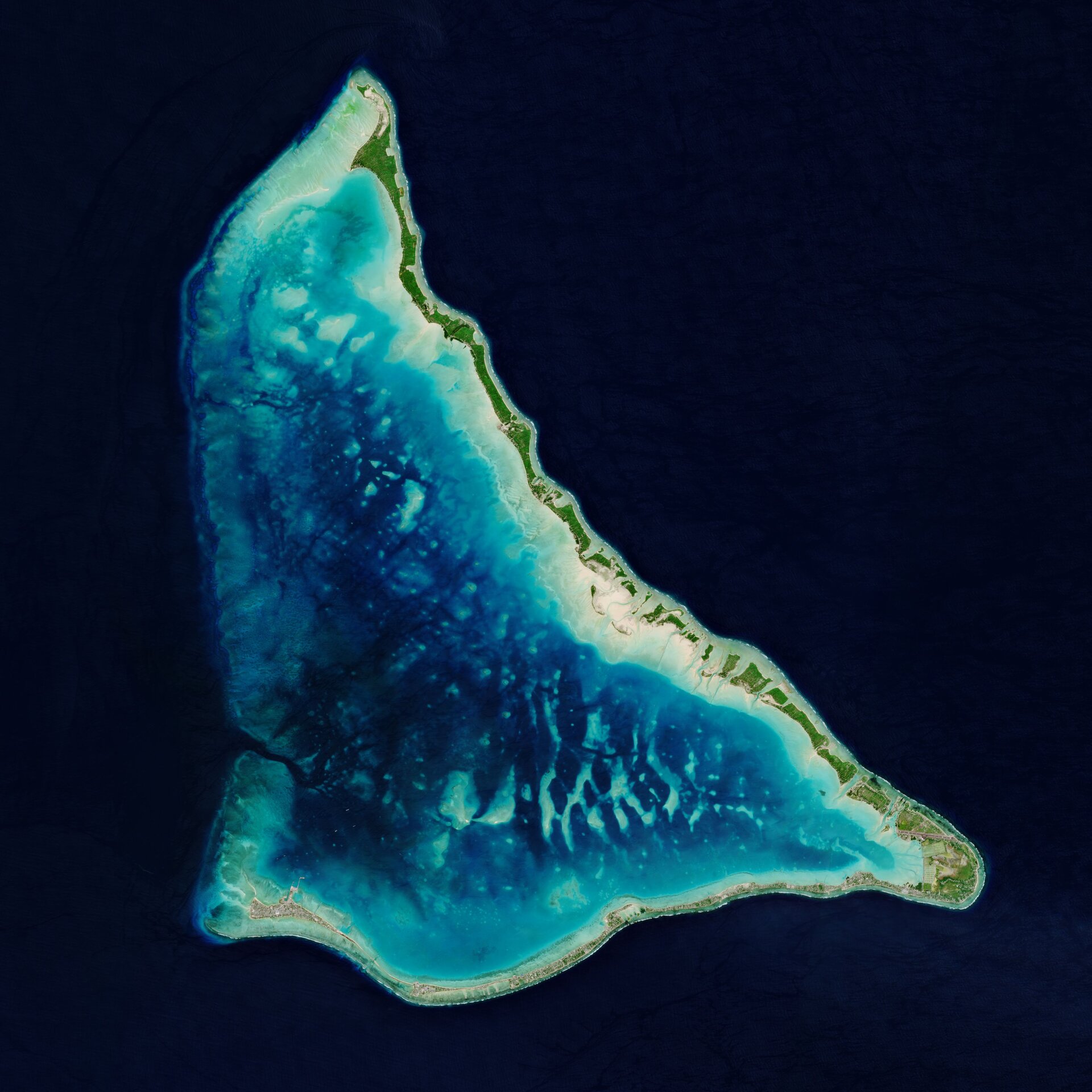 The Copernicus Sentinel-2 mission takes us over the Tarawa Atoll in the Republic of Kiribati – a remote Pacific nation threatened by rising seas.

The Republic of Kiribati is an independent island nation consisting of some 33 atolls near the equator in the central Pacific. The islands are spread over approximately 3.5 million sq km of ocean, but with a total land area of only 800 sq km.

Tarawa Atoll, pictured here, lies approximately halfway between Hawaii and Australia. Tarawa consists of a large lagoon fringed by a V-shaped reef, around 35 km long, and is made up of more than 30 islets. Tarawa, the site of a brutal World War II battle, is divided into North and South Tarawa.

South Tarawa, is made up of a thin, string of islets joined by causeways and is home to more than half of Kiribati’s 100 000 citizens. Bonriki International Airport, serves as the main gateway to the country, and can be seen in the bottom right of the image.

Kiribati is one of the lowest-lying nations in the world, with many of the country’s atolls and coral islands rising no higher than 2 m above sea level – making them extremely vulnerable to sea level rise. Kiribati has already seen growing damage from storms and flooding. In 1999, two of the nation’s unpopulated islets, Tebua Tarawa and Abanuea, disappeared underwater entirely.

The Special Report on the Ocean and Cryosphere in a Changing Climate on sea level rise states that the global mean sea level is likely to rise between 0.29 m and 1.1 m by the end of this century. While this may not sound like a lot, small island nations, including Kiribati, will face particularly devastating consequences.

Small changes in sea-level rise will not only cause flooding, erosion, soil contamination and coral degradation, but will ultimately shrink more of Kiribati’s land area – displacing many of its inhabitants.

It is vital that over the coming decades, the changing height of Earth’s sea surface continues to be closely monitored. Set to launch in November, the Copernicus Sentinel-6 Michael Freilich satellite will accurately measure changes in global sea level. Mapping up to 95% of Earth’s ice-free ocean every 10 days, it will provide key information on ocean currents, wind speed and wave height for maritime safety.

This new satellite will assume the role as a reference mission, continuing the ‘gold standard’ record for climate studies started in 1992 – extending the legacy of sea-surface height measurements until at least 2030. For more information, visit the Copernicus Sentinel-6 website.

This image, acquired on 14 June 2020, is also featured on the Earth from Space video programme.