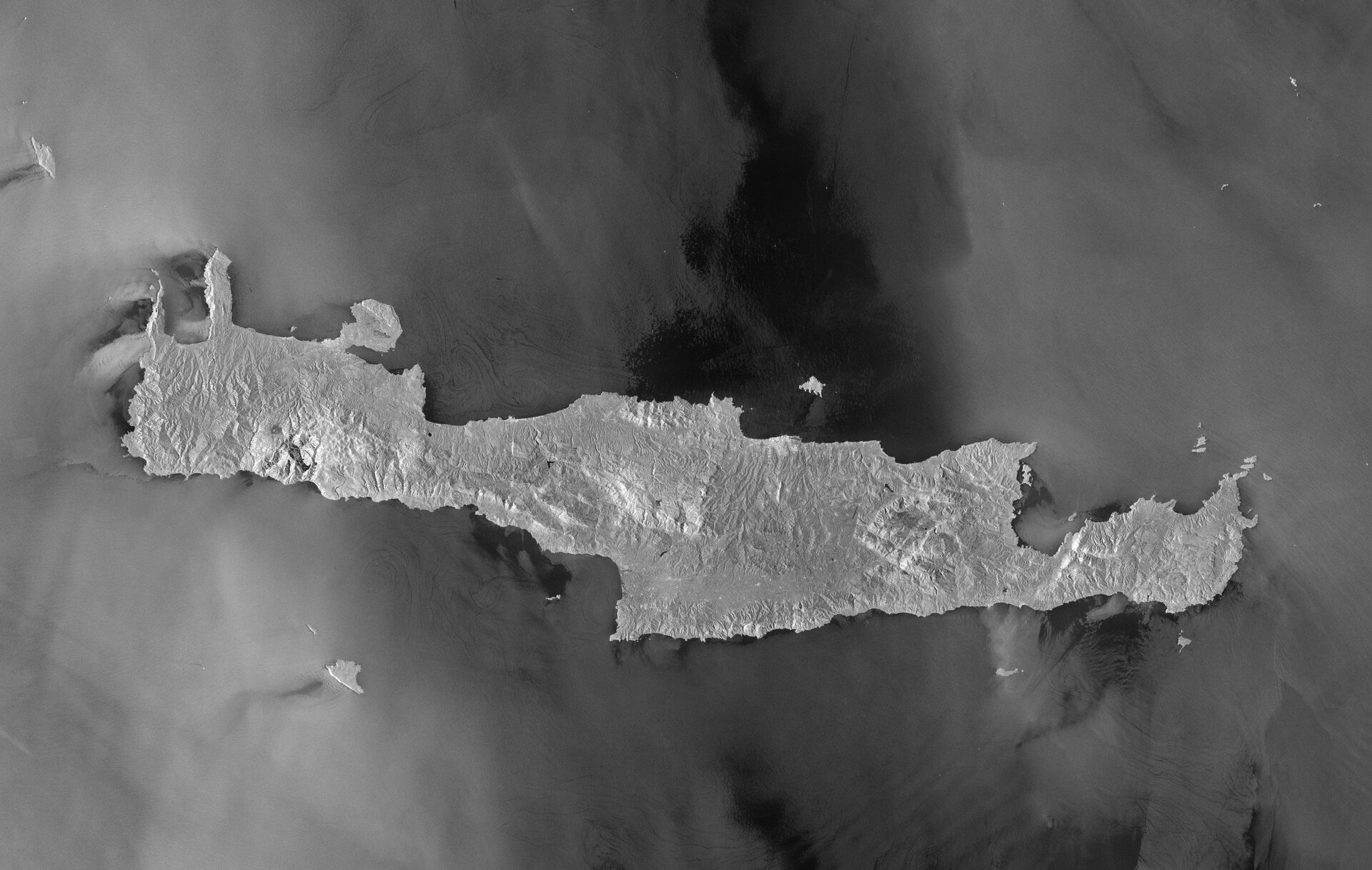 Greece’s largest and most populous island, Crete, is featured in this image captured by the Copernicus Sentinel-1 mission.

The two identical Copernicus Sentinel-1 satellites carry radar instruments, which can see through clouds and rain, and in the dark, to image Earth’s surface below. The sea surface reflects the radar signal away from the satellite, making water appear dark in the image, while cities on the island are visible in white owing to the strong reflection of the radar signal.

Crete extends for approximately 260 km from west to east, and is approximately 60 km across at its widest point. Crete is known for its rugged terrain and is dominated by a high mountain range crossing from west to east. This includes the Lefká Ori, or ‘White Mountains’ in the west, Mount Ida, Crete’s highest mountain, visible in the centre of the island, and the Díkti Mountains in the east. Crete’s capital and largest city of the island, Heraklion, is located along the northern coastline.

Several other smaller islands are dotted around the image, including Gavdos, Chrisi and Dia.

Unbeknown to many, the island of Crete plays an important role in the Copernicus satellite altimetry constellation and on an international stage. Satellite altimetry data have to be continuously monitored at the ESA Permanent Facility for Altimetry Calibration (PFAC) where different techniques have pioneered the use of transponders linked to international metrology standards to provide the best measurements to validate satellite altimeters in space soon after launch.

This PFAC network has been operating for around two decades, with a main calibration validation station located on the island of Gavdos and a dedicated transponder site in the Cretan mountains. A transponder receives, amplifies and re-transmits the radar pulse back to the radar altimeter in space where the signal is recorded. The transponder measurements are used to determine the range and datation of the satellite altimeter data in a unique manner – something that is very difficult to achieve on the ground.

Western Crete was identified as a unique location for the inter-comparison of satellite altimeters owing to its unique positioning of the Copernicus Sentinel-3 and Sentinel-6 orbit crossing points.

The sea surrounding the island has minimal tides, and the rugged mountainous landscape means that the transponder signals can be measured from space with little interference, but most importantly, in the sky above it, a number of satellites in orbit converge. This allows each satellite flying above to be cross-calibrated with the next one at one specific meeting point using the same instrumentation.

The Fiducial Reference Measurements for Sentinel-6 is the latest activity designed to bring the full power of the PFAC to check the performance of the upcoming Copernicus Sentinel-6 Michael Freilich satellite – the next radar altimetry reference mission extending the legacy of sea-surface height measurements until at least 2030.

Every 10 days, Sentinel-6 will provide sufficient measurements to map the sea-surface height of the ocean from which sea-level rise can be computed. As part of the ESA contribution to the long-term verification and validation of both Sentinel-3 and Sentinel-6 missions, the PFAC is being extended with a second transponder to be installed on Gavdos Island, southwest of Crete, as seen in the Sentinel-1 radar image.  This gives the ‘big picture’ allowing us to chart the sea level with confidence.