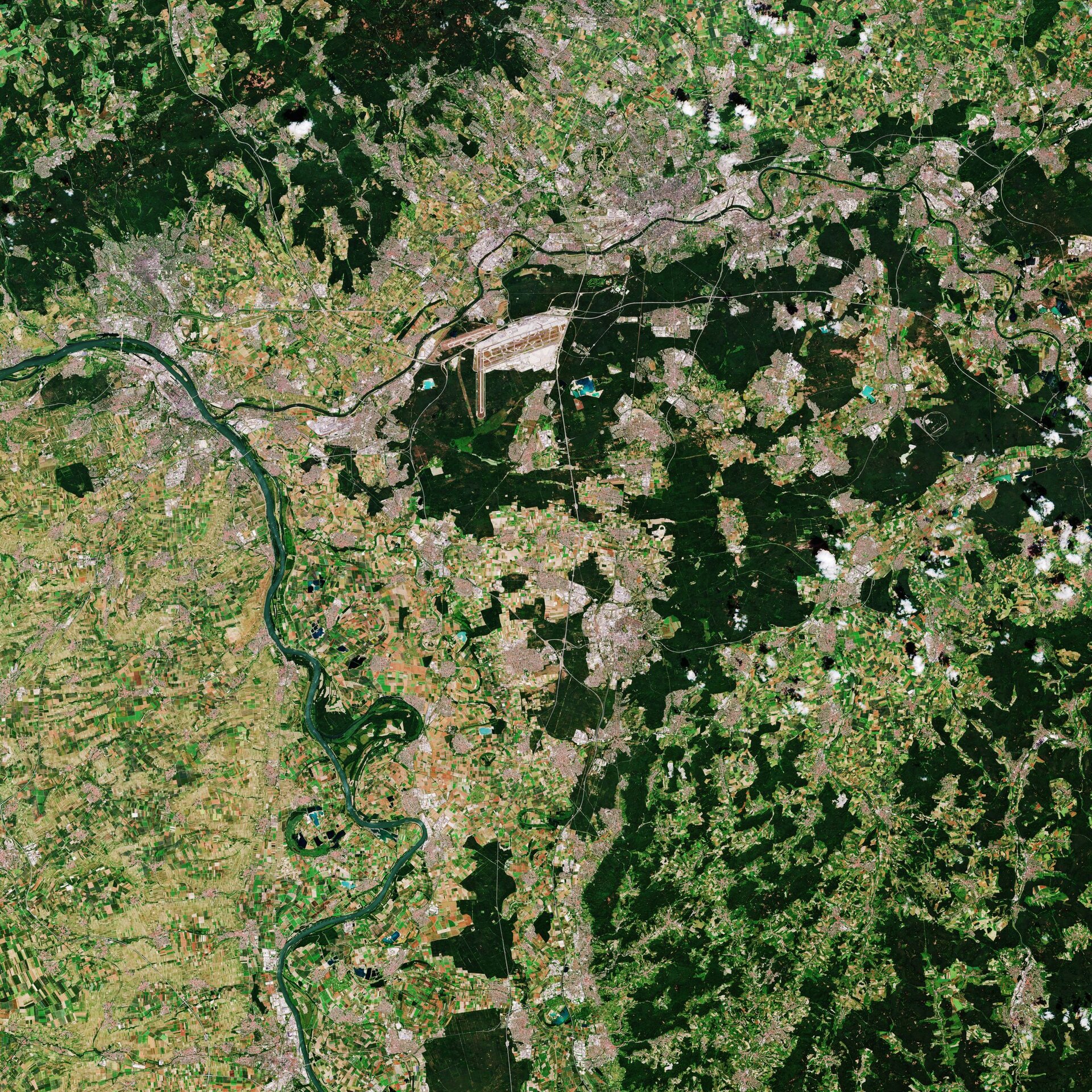 The image pictured here shows the Frankfurt Rhine-Main region in south-central Germany. With a population of almost six million people, the region includes the main cities of Frankfurt, Wiesbaden, Offenbach and Darmstadt.

Frankfurt, Germany’s fifth-largest city, is visible at the top of the image, located on both sides of the Main River. The southern part of the city contains the Frankfurt City Forest, the largest inner-city forest in Germany, visible in dark green. Frankfurt Airport can be easily spotted southwest of the city centre.

The Rhine River can be seen in the left of the image. The river flows for around 1230 km in a northerly direction through Germany and the Netherlands, before emptying into the North Sea. Darmstadt is located between the Rhine and the Odenwald, a forested plain in the bottom-right of the image. Darmstadt is often referred to as a ‘City of Science,’ as it’s a major centre of scientific institutions including ESA’s European Space Operations Centre (ESOC) and the European Organisation for the Exploitation of Meteorological Satellites (Eumetsat).

ESOC is home to the engineering teams that control spacecraft in orbit and across the Solar System. On 21 November, the Copernicus Sentinel-6 Michael Freilich ocean-monitoring satellite will launch on a Space X Falcon 9 rocket from California, US, and once safely in orbit, ESA’s ESOC Operations Centre will take over the reins.

Copernicus Sentinel-6 Michael Freilich will replace the Jason series of satellites currently providing data on Earth’s oceans. Over the subsequent days after launch, the Sentinel-6 mission control team will manoeuvre the satellite into its correct path, which will fly in tandem with the Jason-3 spacecraft it will replace, and then fall into position right behind it.

Once the Sentinel is through the critical early phase and drifts towards its target orbit, Eumetsat will complete the final ‘orbit acquisition’ and take on responsibility for commissioning, routine operations and distribution of the mission’s vital data.

Copernicus Sentinel-6 will join a fleet of Earth’s monitoring spacecraft in the low-Earth orbit – flying at a mean altitude of 1336 km. ESA’s Space Debris Office, also based at ESOC, will be on-hand through the critical early days, monitoring and calculating the risk of collisions with swirling space debris and advising on how to keep the mission safe.

This image, captured on 23 June 2020, is also featured on the Earth from Space video programme.