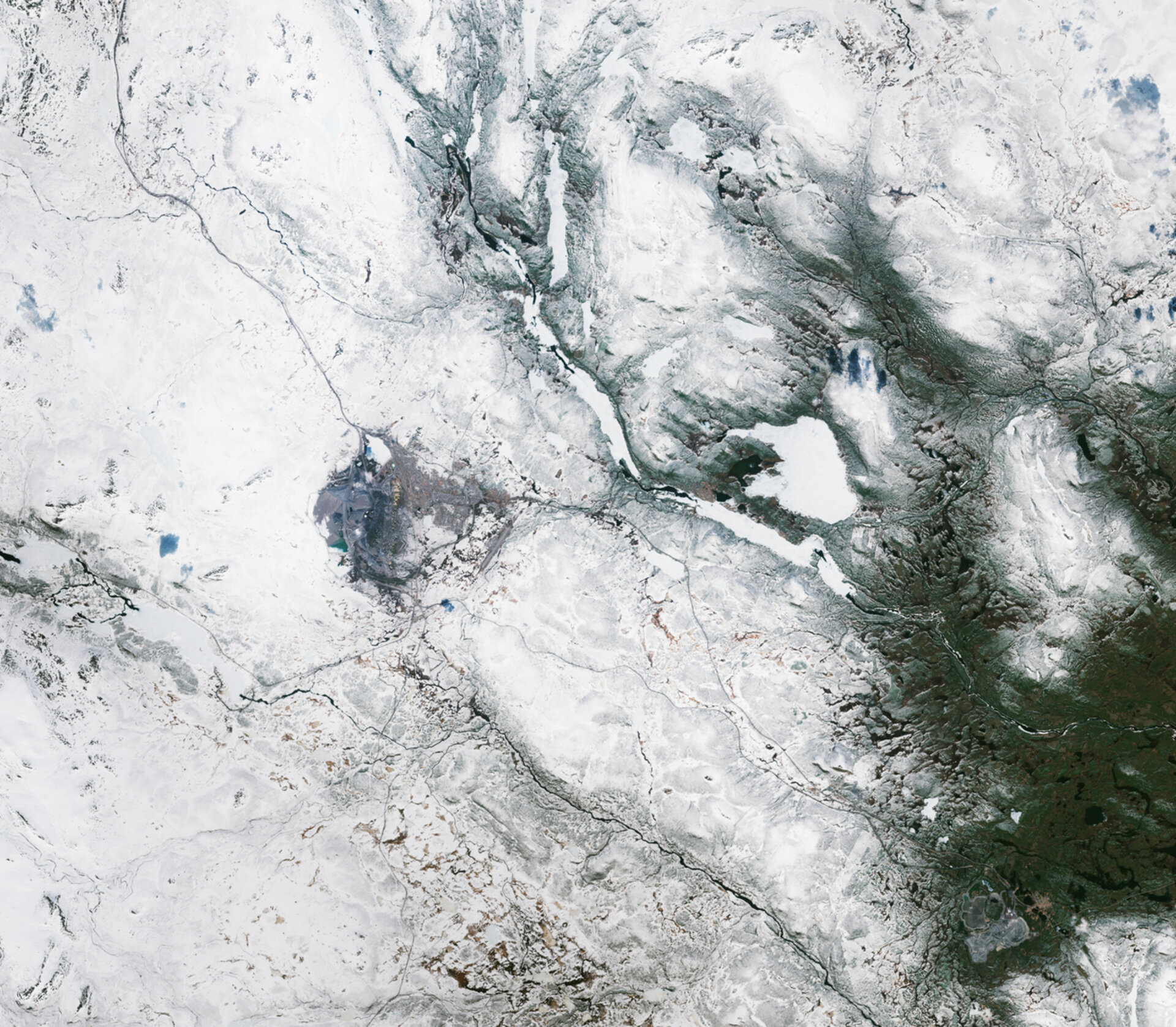 Kiruna, the northernmost town in Sweden, is featured in this snowy image captured by the Copernicus Sentinel-2 mission.

Kiruna, visible in darker tones just left of the centre in the image, is located in the county of Norrbotten and is around 145 km north of the Arctic Circle. The city, with a population of around 22 000 inhabitants, is on the eastern shore of Lake Luossa (Luossajärvi), between the iron-ore Kiruna (Kiirunavaara) and Luossa (Luossavaara) mountains.

Around 20 km east of Kiruna, the small town of Jukkasjärvi is visible, and is best known for its annual ice hotel constructed from snow and ice blocks taken from the nearby Torne River. Thin, dark lines cutting across the image are roads that connect the towns with other parts of Sweden.

At a latitude of almost 68°, around 40 km east of Kiruna, lies ESA’s Kiruna ground station, which in September 2020 celebrated 30 years of space excellence. The station is hard to spot, but is located in the centre-right of the image, just above a dark lake.

Ideally positioned to support polar-orbiting missions, the station is a crucial gateway for much of the data enabling us to study our planet’s oceans, water and atmosphere, forecast weather and understand the rapid advance of climate change.

Kiruna ground station is part of the Agency’s tracking station network – Estrack – a worldwide network linking satellites in orbit and across the Solar System with ESA’s Space Operations Centre, ESOC, in Darmstadt, Germany. The station features two sophisticated terminals with 15 m and 13 m-diameter antennas to communicate with satellites in Earth’s orbit, including CryoSat, Swarm, Copernicus Sentinel-1 and the recently-launched Sentinel-6 Michael Freilich satellite.

While the North Pole Satellite Station in Alaska caught the spacecraft’s first signals from space after separation from the launcher, the Kiruna ground station tracked the satellite’s first days. Eumetsat then completed the final ‘orbit acquisition,’ taking over responsibility for commissioning, routine operations and distribution of the mission’s vital data.

While Sentinel-6 is one of the European Union’s family of Copernicus missions, its implementation is the result of the unique collaboration between ESA, NASA, Eumetsat and NOAA, with contribution from the French space agency CNES.

This image, captured on 27 May 2020, is also featured on the Earth from Space video programme.