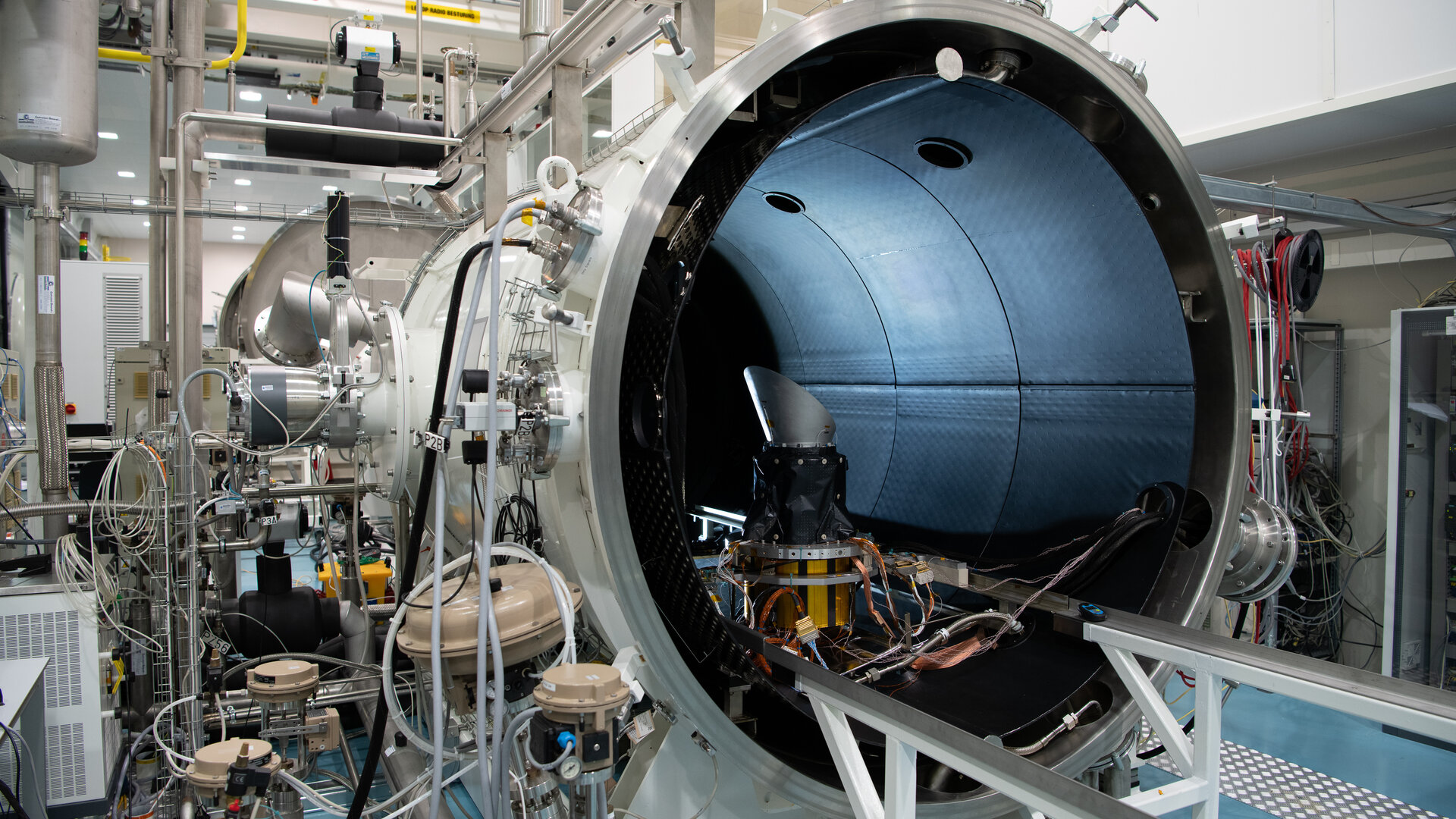 Key technology for ESA’s exoplanet-hunting Plato spacecraft has passed a trial by vacuum to prove the mission will work as planned. This test replica of an 80-cm high, 12-cm aperture camera spent 17 days inside a thermal vacuum chamber.

Testing at the ESTEC Test Centre in the Netherlands reproduced the telescope’s planned operating environment in deep space, 1.5 million km away from Earth.

“Located at the L2 Lagrange point, Plato ( PLAnetary Transits and Oscillations of stars) will have 26 of these cameras pointing at the same target stars. They will acquire images every 25 seconds – every 2.5 seconds for the two central cameras – for at least two years at a time to detect tiny shifts in brightness caused by exoplanets transiting these stars,” explains Yves Levillain, Plato’s Instrument System Engineer.

“By observing with so many telescopes at once on a very steady basis we will attain a much higher signal-to-noise ratio than a single large telescope. Each telescope camera will host four CCDs producing 20.3 megapixel images adding up to 81.4 megapixel per normal camera and 2.11 gigapixels for the overall spacecraft – the most pixels ever for a space mission.

“Away from the Sun’s brightness we expect to be able to detect the presence of Earth-like exoplanets, where life as we know it might be able to develop, and even to perform stellar seismology, gathering evidence of ‘starquakes’ in the stars we observe.”

But first the team had to know their camera design was sound. The ‘Structural and Thermal Model’ of the camera, prepared by institutions and companies across Europe, was a near-replica of a flight model, except its lenses were not optically finished.

“We placed the camera in our VTC-1.5 Space Simulator, using liquid nitrogen to keep it around -80°C,” says Matteo Appolloni of the ESTEC Test Centre. “First of all the team wanted to be sure that their thermal model was correct – that the camera responded as expected to temperature changes. The other purpose of the testing was to check an innovative temperature-based focusing method.”

To reach the high optical precision required, the focal length of each Plato camera will be adjusted through very slight temperature shifts, causing it to expand or shrink. Changing the temperature by just 0.1 °C using a trio of camera heaters will adjust its focusing length by 1 micrometre – a thousandth of a millimetre.

The testing was monitored on a 24 hour seven days per week basis by personnel from ESA’s Plato mission team, industry representatives and European Test Services – the company that operates the Test Centre for ESA – divided into three shifts daily. To observe COVID-19 protocols they worked apart and wiped down computers and surfaces before shift changes.

“Over the days of the test campaign we were pretty confident of success, because the team has put a lot of work into the technical aspects,” adds Yves.

“Our biggest worry was actually due to the pandemic, because if somebody caught COVID-19 then our testing might be disrupted. But now the basic design is validated, we’ll proceed to optical testing of engineering models of the camera, as well as data processing checks, then in the summer a full-scale STM of the Plato spacecraft platform minus the cameras will undergo testing here at the ESTEC Test Centre.”