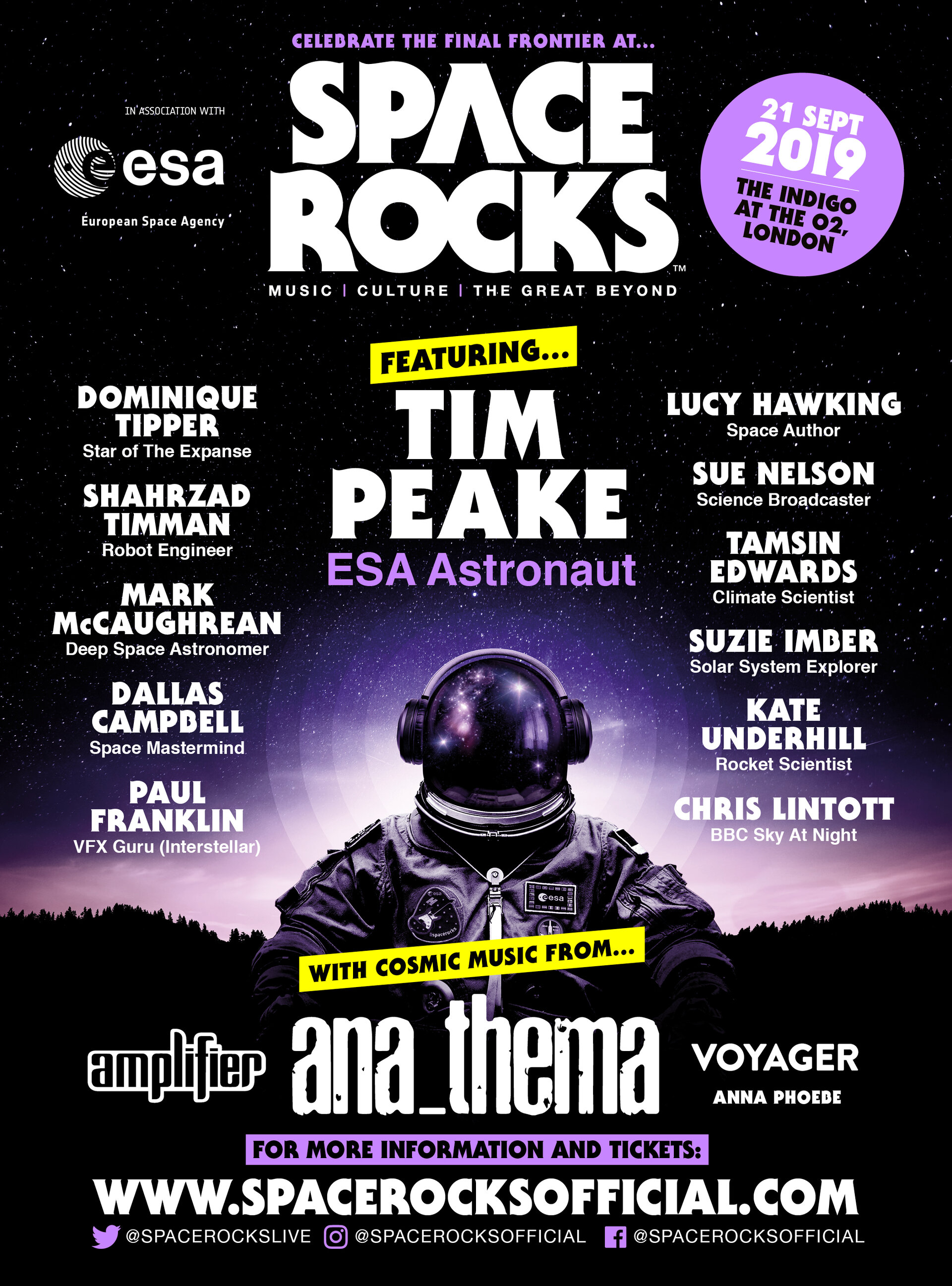 The award-winning Space Rocks returns to the indigo at The O2 in London on 21 September for another celebration of space science and engineering, along with the art, music and science fiction inspired by it, presented by Twin V Ltd in association with ESA.

Part science fair, part rock concert, this day-long festival of space exploration will be hosted again by the BBC’s renowned science broadcaster Dallas Campbell. He’ll be introducing some of the most inspirational and talented people from the worlds of space, art, music, and film.

United by a common passion for exploring the Universe beyond our world, this unique gathering of guests from scientific and creative fields will include, from ESA, astronaut Tim Peake, rocket scientist Kate Underhill, space robotics engineer Shahrzad Timman and astronomer Mark McCaughrean.

The inaugural Space Rocks show last April saw it win ‘Event of the Year’ at the Prog Music Awards, and it was also nominated by the British Interplanetary Society for a Sir Arthur C. Clarke Award, both hugely prestigious honours.

The new 2019 flagship event comprises three separate sessions, each with something for everyone, from devoted space enthusiasts to the sci-curious.

The first session, Space Academy, is aimed at kids of all ages and will highlight the incredible range of space science currently in progress. In 2019, the world, and indeed Space Rocks, is celebrating the 50th anniversary of Apollo 11 as well as considering our next giant leaps, from new robotic and human missions to the Moon onwards to Mars and the rest of the Solar System.

The second session, Space Lab, is where the great minds from the world of space science, the arts, and music will meet to debate and explore the big questions. There’ll be conversations exploring a wide range of topics, including the crucial role that space has to play in tackling the climate crisis and other challenges facing us on our home planet.

SpaceRocks Live is the third part, the live music gig. Putting the ‘rock’ in Space Rocks this year are acclaimed violinist and composer Anna Phoebe and one of the UK’s most innovative rock bands Amplifier as the first acts for the evening.

The space-inspired set continues with Australian cosmic rockers Voyager and the headline act this year, musical visionaries Anathema. This finale will be a special show they are calling ‘The Space Between Us’ – a unique, space-themed set with visuals created in collaboration with ESA.

Finally, there will also be various stands and stalls, along with short pop-up talks in the intervals between sessions in the Space Lounge.

Tickets are available now on the Space Rocks web site