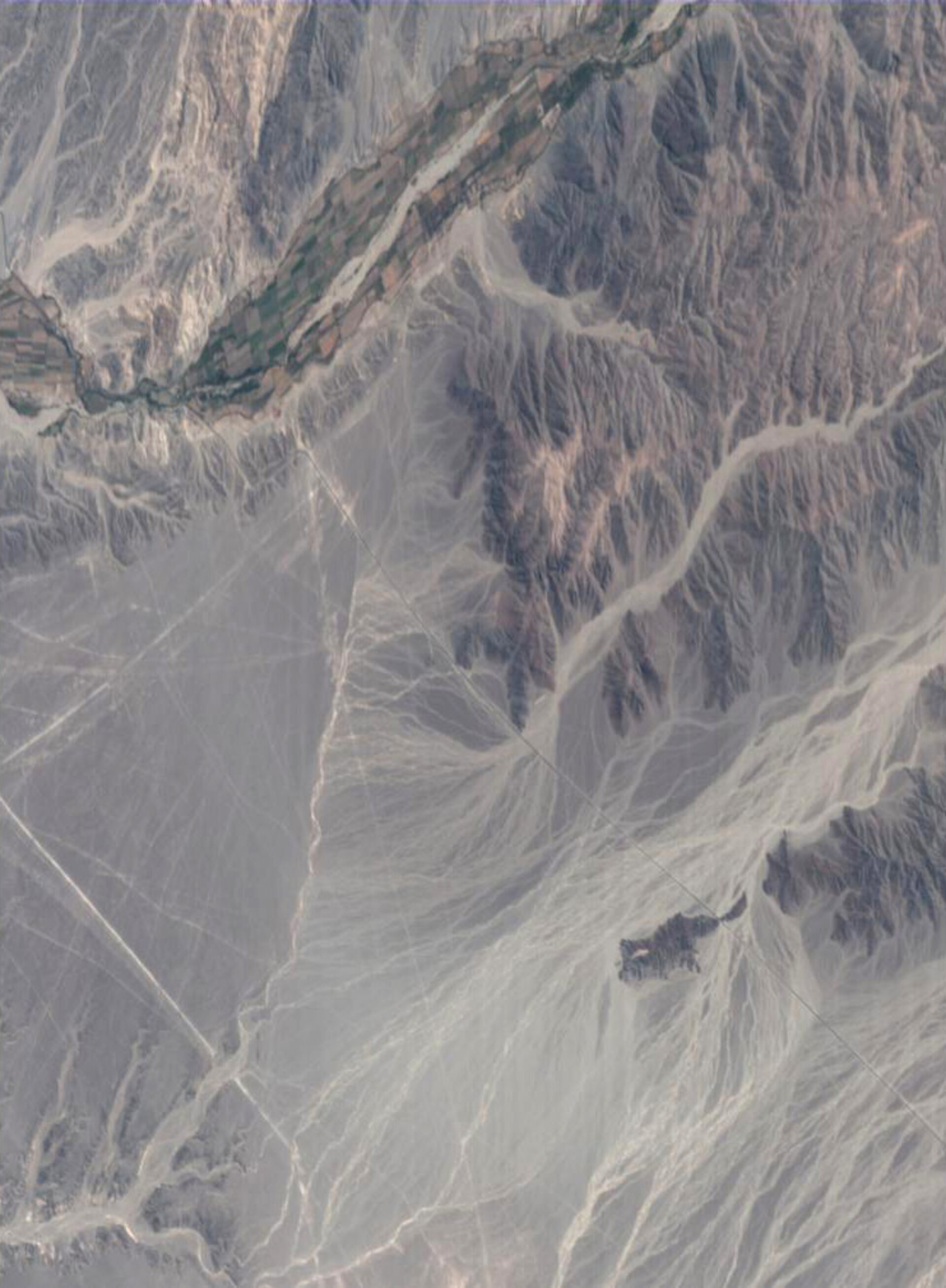 Visible from ESA's Proba spacecraft 600 kilometres away in space are the largest of the many Nasca Lines; ancient desert markings now at risk from human encroachment as well as flood events feared to be increasing in frequency.

Designated a World Heritage Site in 1994, the Lines are a mixture of animal figures and long straight lines etched across an area of about 70 km by 30 km on the Nasca plain, between the Andes and Pacific Coast at the southern end of Peru. The oldest lines date from around 400 BC and went on being created for perhaps a thousand years.

They were made simply enough, by moving dark surface stones to expose pale sand beneath. However their intended purpose remains a mystery. It has variously been proposed they were created as pathways for religious processions and ceremonies, an astronomical observatory or a guide to underground water resources.

The Nasca Lines have been preserved down the centuries by extreme local dryness and a lack of erosion mechanisms, but are now coming increasingly under threat: it is estimated the last 30 years saw greater erosion and degradation of the site than the previous thousand years before them.

In this image, acquired by the Compact High Resolution Imaging Spectrometer (CHRIS) instrument aboard Proba on 26 September 2003, the 18.6 metre resolution is too low to make out the animal figures although the straight Nasca Lines can be seen faintly. Clearest of the straight markings is actually the Pan-American Highway, built right through the region – seen as a dark marking starting at the irrigated fields beside the Ingenio River, running from near the image top to the bottom right hand corner. Associated dirt track roads are also visible amidst the Nasca Lines.

Clearly shown in the Proba image is another cause of damage to the Lines: deposits left by mudslides after heavy rains in the Andean Mountains. These events are believed to be connected to the El Niño phenomenon in the Pacific Ocean – first named by Peruvian fishermen hundreds of years ago – and one concern is they are becoming more frequent due to climate change.

A team from Edinburgh University and remote sensing company Vexcel UK has been using data from another ESA spacecraft to measure damage to the Nasca Lines, with their results due to be published in the May Issue of the International Journal of Remote Sensing.

Nicholas Walker of Vexcel UK explained: "Although the instrument lacks sufficient resolution to unambiguously distinguish individual lines and shapes, by combining two satellite images using a technique known as SAR interferometric coherence it is possible to detect erosion and changes to the surface at the scale of centimetres".

The image shown combines two scenes acquired by ERS-2 in 1997 and 1999. The bright areas show where there has been very little terrain change in the interval, while darker regions show where de-correlation has occurred, highlighting possible sites where erosion may be taking place.

"Some de-correlation comes simply from the geometry of the area as seen by the instrument in space, with low coherence around areas overshadowed by Andean foothills to the east of the Nasca plain," said Iain Woodhouse of Edinburgh University. "The second major loss is seen in the river valleys, due primarily to agricultural activity taking place during the two-year period.

"The third is changes in the surface of the plain due to run-off and human activity. The dark lines crossing the plain are roads and tracks serving local communities and the power line, as well as the Pan American Highway, the only surfaced road in this region of Peru."

The de-correlation observed is most likely caused by vehicles displacing stones along these tracks and the sides of the Pan-American Highway. The de-correlation from the run-off is distinct from this as it follows the characteristic drainage patterns down from the foothills.

"Interferometric coherence seems to provide an effective means for monitoring these two major sources of risk to the integrity of the markings," Woodhouse concluded. "We are developing the technique to include more sensors and data of higher spatial resolution, so as to encourage the establishment of a long term and frequent monitoring programme supporting conservation efforts in the area."