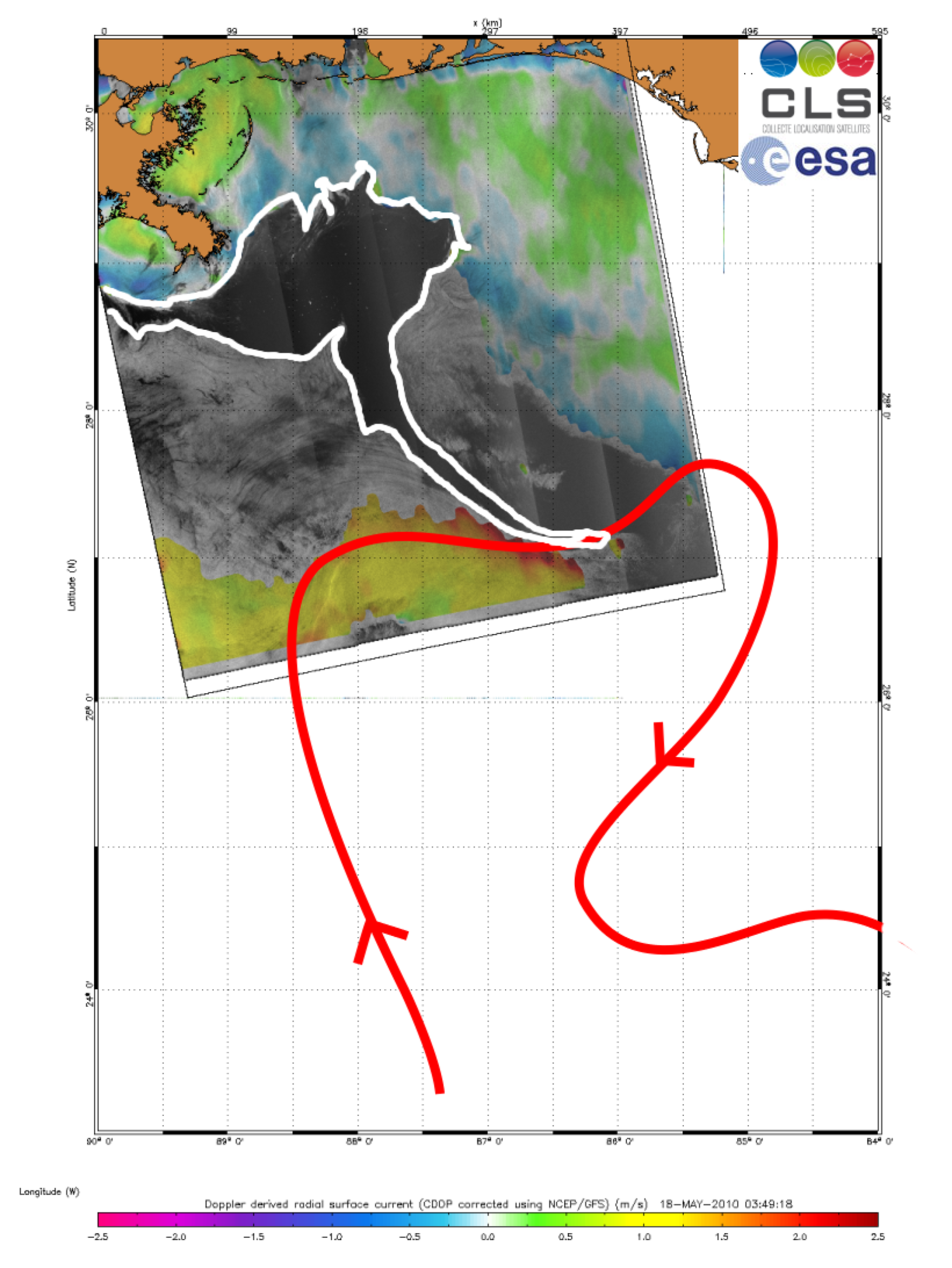 Scientists monitoring the US oil spill with ESA’s Envisat radar satellite say that it has entered the Loop Current, a powerful conveyor belt that flows clockwise around the Gulf of Mexico towards Florida.

"With these images from space, we have visible proof that at least oil from the surface of the water has reached the current," said Dr Bertrand Chapron of Ifremer, the French Research Institute for Exploitation of the Sea.

Dr Chapron and Dr Fabrice Collard of France's CLS have been combining surface roughness and current flow information with Envisat Advanced Synthetic Aperture Radar (ASAR) data of the area to monitor the proximity of the oil to the current.

In the ASAR image above, acquired on 18 May, a long tendril of the oil spill (outlined in white) extends down into the Loop Current (red arrow).

"We performed advanced processing methods on the images to display surface features like variations in roughness and velocity, which provides insight into the spatial structure of the spill and its transport by surface currents," Dr Collard explained.

From the ASAR images of 12 May and 15 May, the oil spill was observed stretching increasingly closer to the Loop Current, raising concerns that it could reach the current and be carried south towards coral reefs in the Florida Keys.

"Now that oil has entered the Loop Current, it is likely to reach Florida within six days," Dr Chapron said. "Since Envisat ASAR, ERS-2 and other SAR satellites are systematically planned to acquire data over the area, we will monitor the situation continuously."

The scientists warn however that since the Loop Current is a very intense, deep ocean current, its turbulent waters will accelerate the mixing of the oil and water in the coming days.

"This might remove the oil film on the surface and prevent us from tracking it with satellites, but the pollution is likely to affect the coral reef marine ecosystem," Dr Collard said.

Combined efforts using satellite imagery and in-situ measurements of collected water samples will help to assess whether oil is in the deep waters of the ocean.

The Loop Current joins the Gulf Stream — the northern hemisphere’s most important ocean-current system — sparking fears that oil could enter this system and be carried up to the US East Coast.