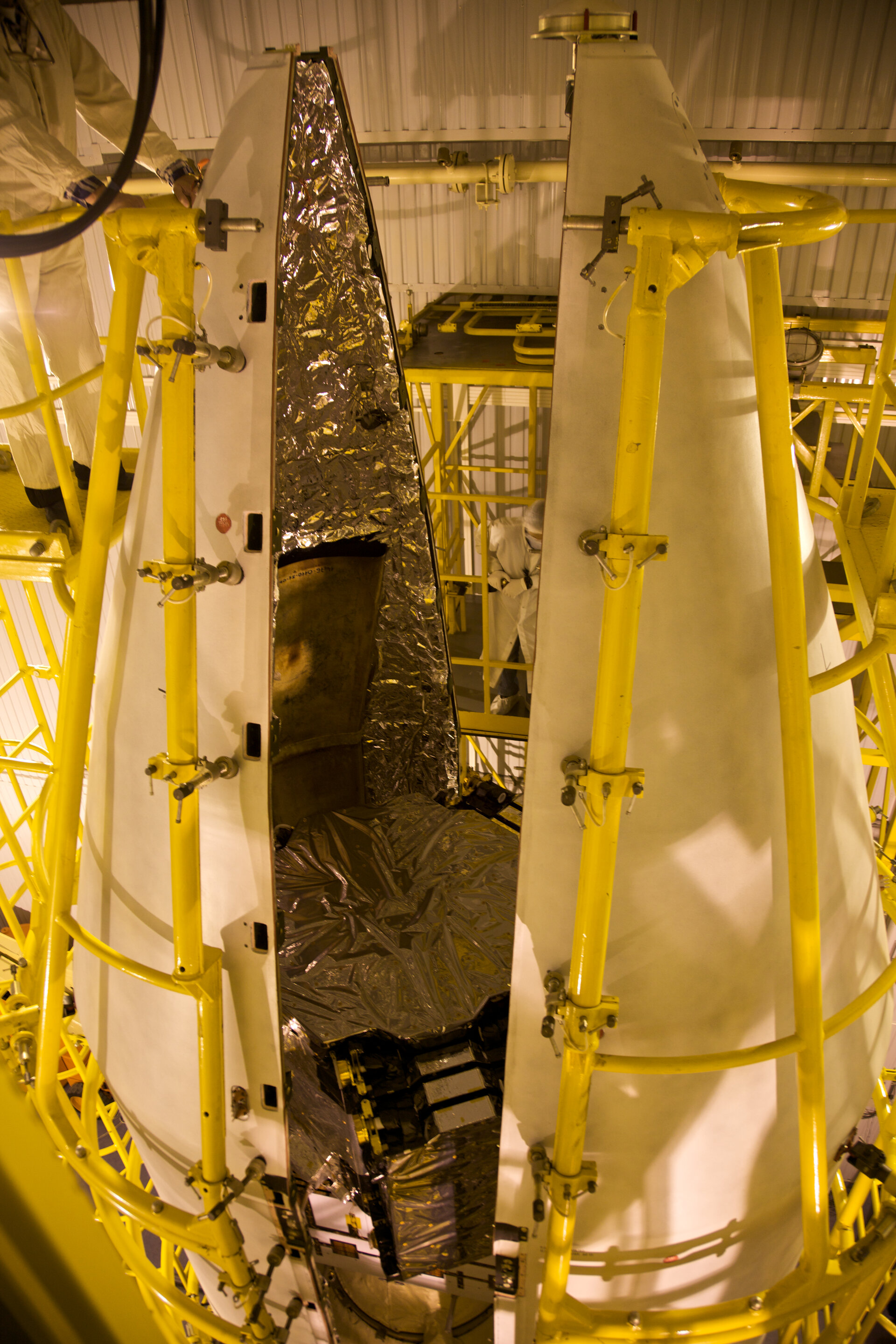 As preparations for the launch of SMOS and Proba-2 continue on schedule, the engineers and technicians at the Russian launch site say goodbye as both satellites are encapsulated within the half-shells of the Rockot fairing.

Volker Liebig, ESA’s Director of Earth Observation Programmes, said, “Today, with the encapsulation of the SMOS satellite in the launcher fairing, we have made an important step towards the launch of this key environmental mission, which will investigate two parameters of the complex climate system. I am looking forward to the launch in a few days!”

The small Proba-2 satellite had already been mated to the Breeze-KM, which is the upper stage of the Russian Rockot, and sealed from view by the SMOS launch adapter above. In launch configuration, Proba-2 sits underneath the SMOS satellite, for injection into orbit after SMOS.

Proba-2 is the second in ESA’s Project for Onboard Autonomy series. Although it is less than a cubic metre, it incorporates a total of 17 technology developments and four scientific experiments that focus on solar and space weather.

Michel Courtois, ESA's Director of Technical and Quality Managment, said, "The encapsulation of the Proba-2 satellite was an emotional moment for the project team in Plesetsk. After five years of hard work, our satellite is one step closer to launch, ready to show the importance of in-orbit demonstration of new technologies."

The Proba-2 technology demonstrator is taking advantage of the launch of the ‘Soil Moisture and Ocean Salinity’ (SMOS) mission, which will make advances in our understanding of Earth’s water cycle.

By employing novel technology in space, SMOS will provide the data to produce global maps of soil moisture at least every three days and global maps of sea-surface salinity averaged over 30 days. Through this regular and consistent mapping, the mission will improve our understanding of the role these two key variables play in regulating the water cycle.

Information from SMOS will also improve weather and climate models, and have practical applications in areas such as agriculture and resource management. The data on sea-surface salinity will further our knowledge of ocean circulation patterns and the role they play in the climate system.

Both Proba-2 and SMOS have been at the Plesetsk Cosmodrome in northern Russia since September, initially taking turns in the cleanroom for the early part of the launch campaign. Over the last week or so, the teams have been working in parallel to mate the satellites to the upper stage of the launcher and now encapsulate them within the fairing. This proved quite emotional for the teams, as both missions have been a number of years in the making.

Now protecting both satellites from the rigors of launch, the half-shells will not open until three minutes after launch, which is scheduled for 2 November at 02: 50 CET (01:50 UT). The next important step in the preparation schedule will be to roll out the ‘upper composite’ to the launch pad on 26 October, for mating with the rest of the rocket.