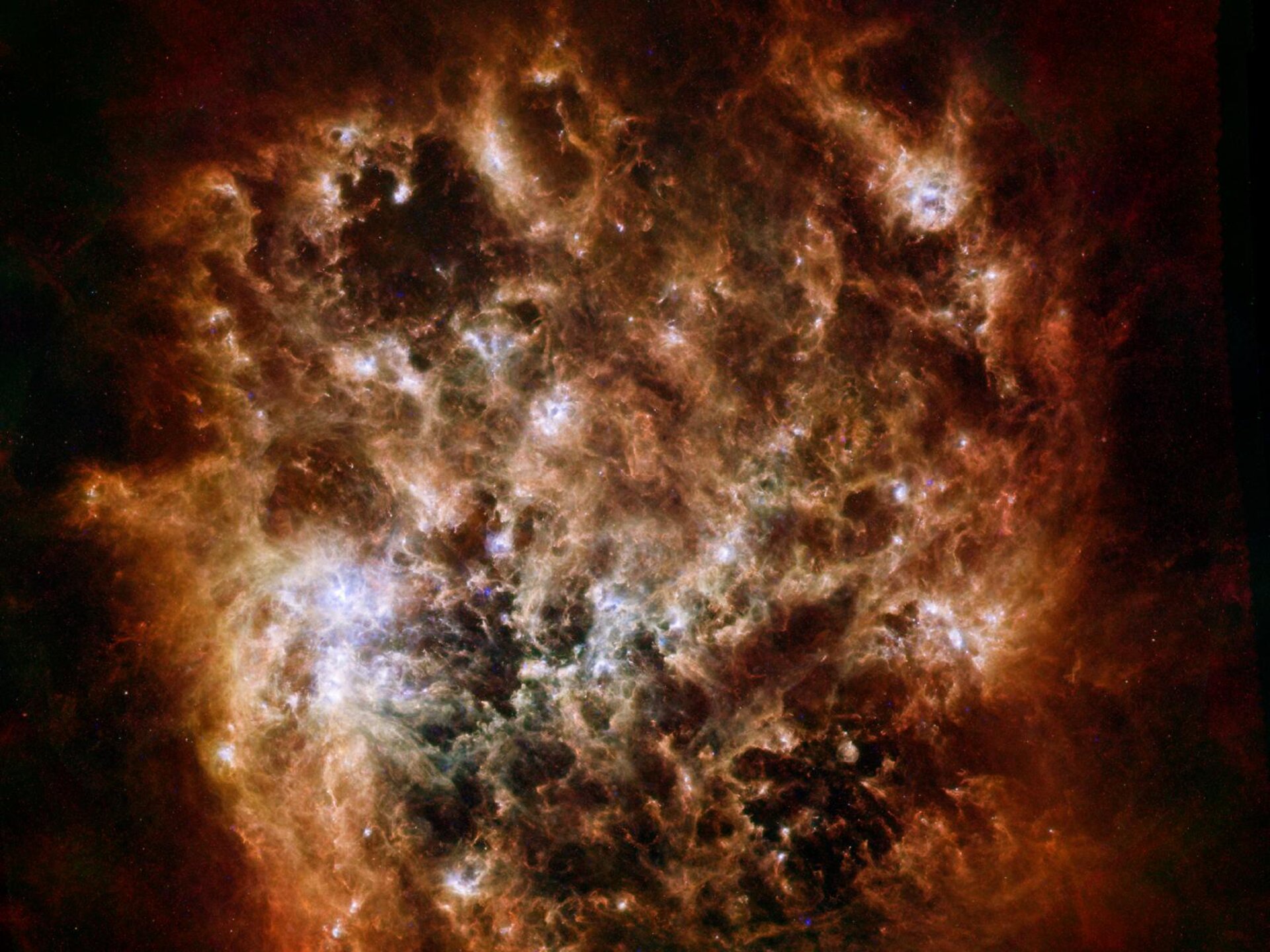 The tumultuous heart of the Large Magellanic Cloud

A scene of jagged fiery peaks, turbulent magma-like clouds and fiercely hot bursts of bright light. Although this may be reminiscent of a raging fire or the heart of a volcano, it actually shows a cold cosmic clump of gas, dust and stars.

The subject of this image, from ESA’s Herschel Space Observatory and NASA’s Spitzer Space Telescope, is the irregularly shaped Large Magellanic Cloud (LMC), one of the nearest galaxies to our own.

The dark, orange-tinted patches throughout the galaxy are plumes of murky dust. The hints of deep red and green mark areas of particularly cool dust, with white and blue tones highlighting hot regions of furious star formation. These pale pockets of gas are heated by the very stars they are creating, which push hot winds out into their surroundings.

To make this scene even more uninviting, the LMC is also home to a giant cosmic spider – the Tarantula Nebula. This hot cloud of gas and dust is easily visible as the brightest region in this image, located towards the lower left of the frame. This nebula is very well studied, for example by the NASA/ESA Hubble Space Telescope, which last year produced a stunning infrared mosaic showing the celestial creepy-crawly in great detail.

This is one of the reasons astronomers like to explore the LMC; it is close enough to us that we can pick out individual nebulas – including the Tarantula – and study how stars form, evolve and die in other galaxies. The LMC is populated by a mix of old and young stars, many of which are lined up along the galaxy’s central ‘bar’, which slants from the bottom left to the top right of this image.

ESA’s Herschel and NASA’s Spitzer are both space telescopes that explore the Universe in infrared light. The LMC looks quite different – and much more serene – in visible light, instead resembling a scattering of pale stars with occasional plumes of pink and purple.

The data making up this image are from Herschel’s Spectral and Photometric Imaging Receiver (SPIRE) and Photoconductor Array Camera and Spectrometer (PACS), and Spitzer’s Multiband Imaging Photometer (MIPS).

This image was previously published by NASA/JPL.