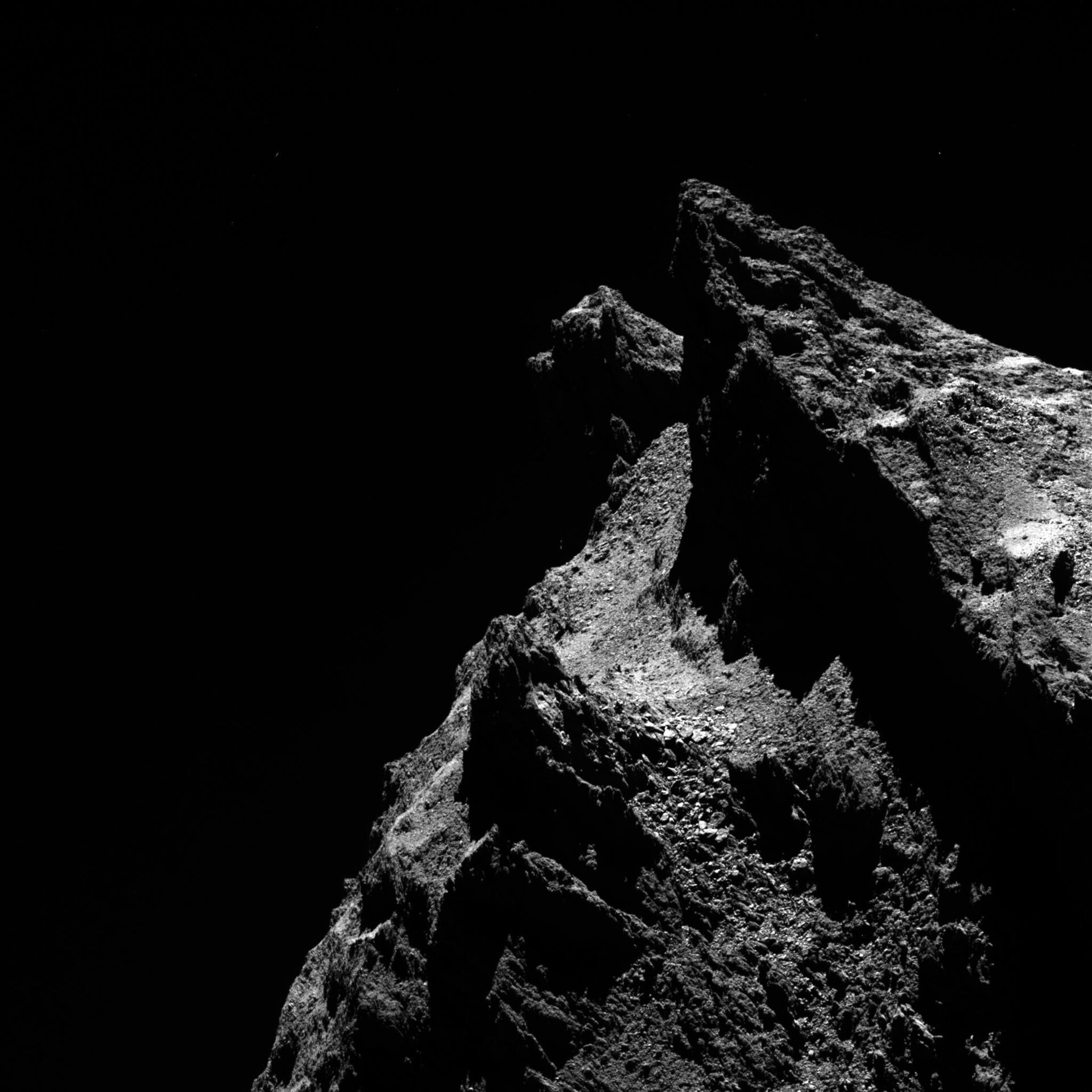 From a distance of five million kilometres to within 20 metres, ESA’s Rosetta spacecraft captured images of Comet 67P/Churyumov-Gerasimenko from all angles.

Between the first and the last images lies one of humankind’s greatest space adventures to rendezvous with and follow a comet as it orbited the Sun, and deploy a lander to its surface.

Seen from afar, the comet is usually likened to a duck in shape, but in this enchanting close-up view its profile resembles that of a cat’s face seen side-on.

The two ‘ears’ of the cat make up the twin peaks either side of the ‘C. Alexander Gate’ – named for US Rosetta Project Scientist Claudia Alexander who passed away in July 2015. These impressive cliffs lie at the border between the Serqet and Anuket regions on the comet’s head. The image was taken on 6 October 2014 from a distance of 18.6 km to the comet.

This is just one of almost 70 000 images taken with Rosetta’s high-resolution imaging system OSIRIS that are now available via a new online and mobile-friendly ‘comet viewer’ created in a joint project with the Department of Information and Communication at Flensburg University of Applied Sciences, and the Max Planck Institute for Solar System Research, who lead the OSIRIS team.

The image viewer hosts the full archive, but also has subsections organising image sets into themes: for example, images showing towering cliffs and bizarre cracks on the comet surface, or those focusing on spectacular dust fountains as the comet launched gas and dust jets into space as its surface ices were warmed as it came closer to the Sun on its orbit.

The collection of OSIRIS images captured the farewell of lander Philae as it dropped towards the surface of the comet, and later, towards the end of the mission, the feverish search for the hidden robot.

Within the new comet viewer, each of the nearly 70 000 images is supplemented with the date on which it was taken, the distance to the comet, and a short accompanying text briefly describing what is seen in the image. The images can be downloaded in full resolution and can also be directly shared to Twitter and Facebook.

For users who wish to delve deeper or use the archive for research purposes, the images are also available in scientific data format; in addition, there is information available on the filters used, focal lengths, and exposure times as well as references to the scientific documentation and evaluation software.

The tool supplements the official ESA Archive Image Browser which also hosts the images taken by Rosetta’s navigation camera made available throughout the mission, and ESA's Planetary Science Archive, for which the OSIRIS image archive was completed in June 2018.

Explore the image viewer at https://rosetta-osiris.eu

Click here to access the original image pictured here and associated data from within the new tool.