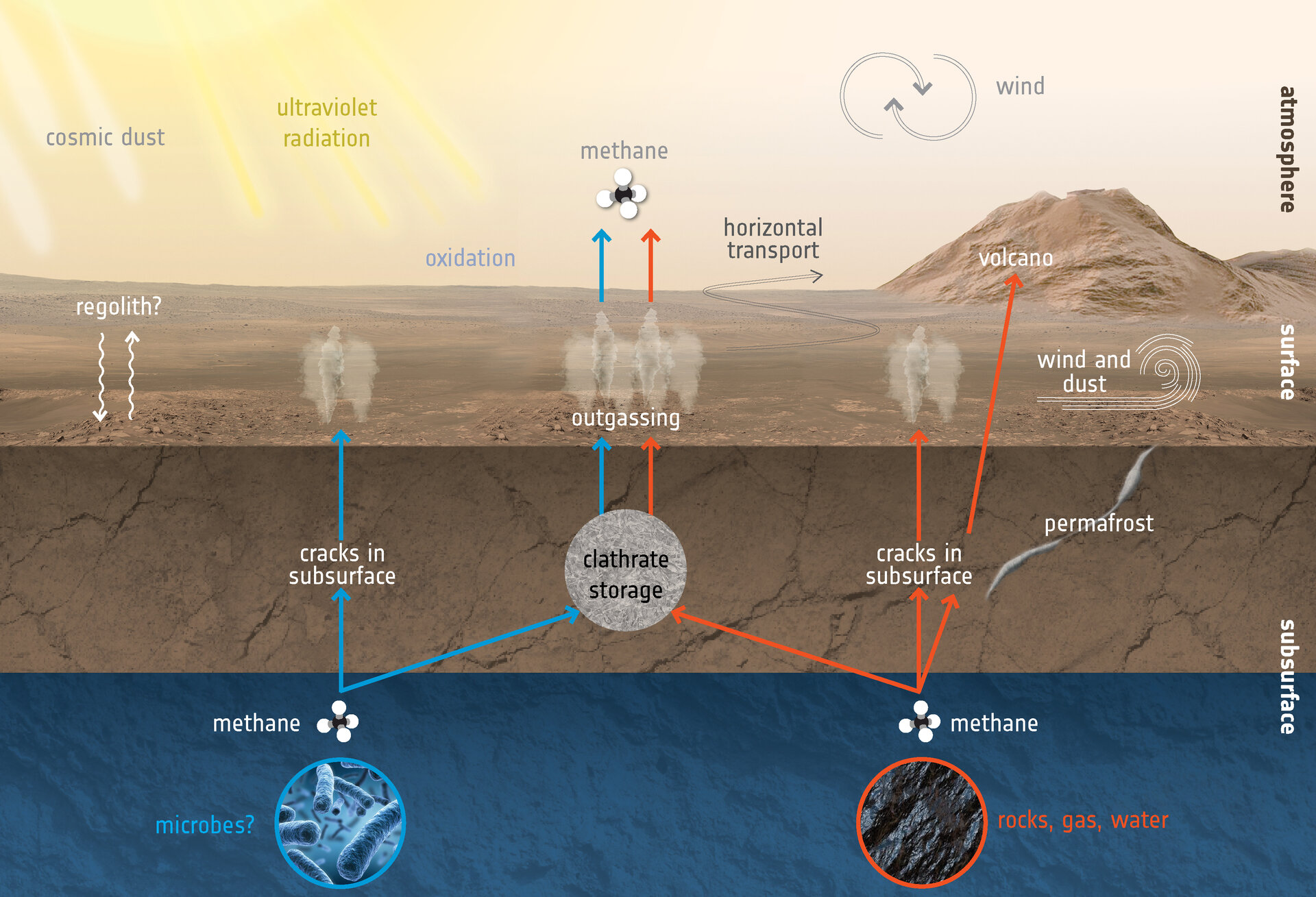 How to create and destroy methane at Mars

How methane is created and destroyed on Mars is an important question in understanding the various detections and non-detections of methane at Mars, with differences in both time and location. Although making up a very small amount of the overall atmospheric inventory, methane in particular holds key clues to the planet’s current state of activity.

This graphic depicts some of the possible ways methane might be added or removed from the atmosphere.

One exciting possibility is that methane is generated by microbes. If buried underground, this gas could be stored in lattice-structured ice formations known as clathrates, and released to the atmosphere at a much later time.

Methane can also be generated by reactions between carbon dioxide and hydrogen (which, in turn, can be produced by reaction of water and olivine-rich rocks), by deep magmatic degassing or by thermal degradation of ancient organic matter. Again, this could be stored underground and outgassed through cracks in the surface. Methane can also become trapped in pockets of shallow ice, such as seasonal permafrost.

Ultraviolet radiation can both generate methane – through reactions with other molecules or organic material already on the surface, such as comet dust falling onto Mars – and break it down. Ultraviolet reactions in the upper atmosphere (above 60 km) and oxidation reactions in the lower atmosphere (below 60 km) acts to transform methane into carbon dioxide, hydrogen and water vapour, and leads to a lifetime of the molecule of about 300 years.

Methane can also be quickly distributed around the planet by atmospheric circulation, diluting its signal and making it challenging to identify individual sources. Because of the lifetime of the molecule when considering atmospheric processes, any detections today imply it has been released relatively recently.

But other generation and destruction methods have been proposed which explain more localized detections and also allow a faster removal of methane from the atmosphere, closer to the surface of the planet. Dust is abundant in the lower atmosphere below 10 km and may play a role, along with interactions directly with the surface. For example, one idea is that methane diffuses or ‘seeps’ through the surface in localized regions, and is adsorbed back into the surface regolith. Another idea is that strong winds eroding the planet’s surface allows methane to react quickly with dust grains, removing the signature of methane. Seasonal dust storms and dust devils could also accelerate this process.

Continued exploration at Mars – from orbit and the surface alike – along with laboratory experiments and simulations, will help scientists to better understand the different processes involved in generating and destroying methane.