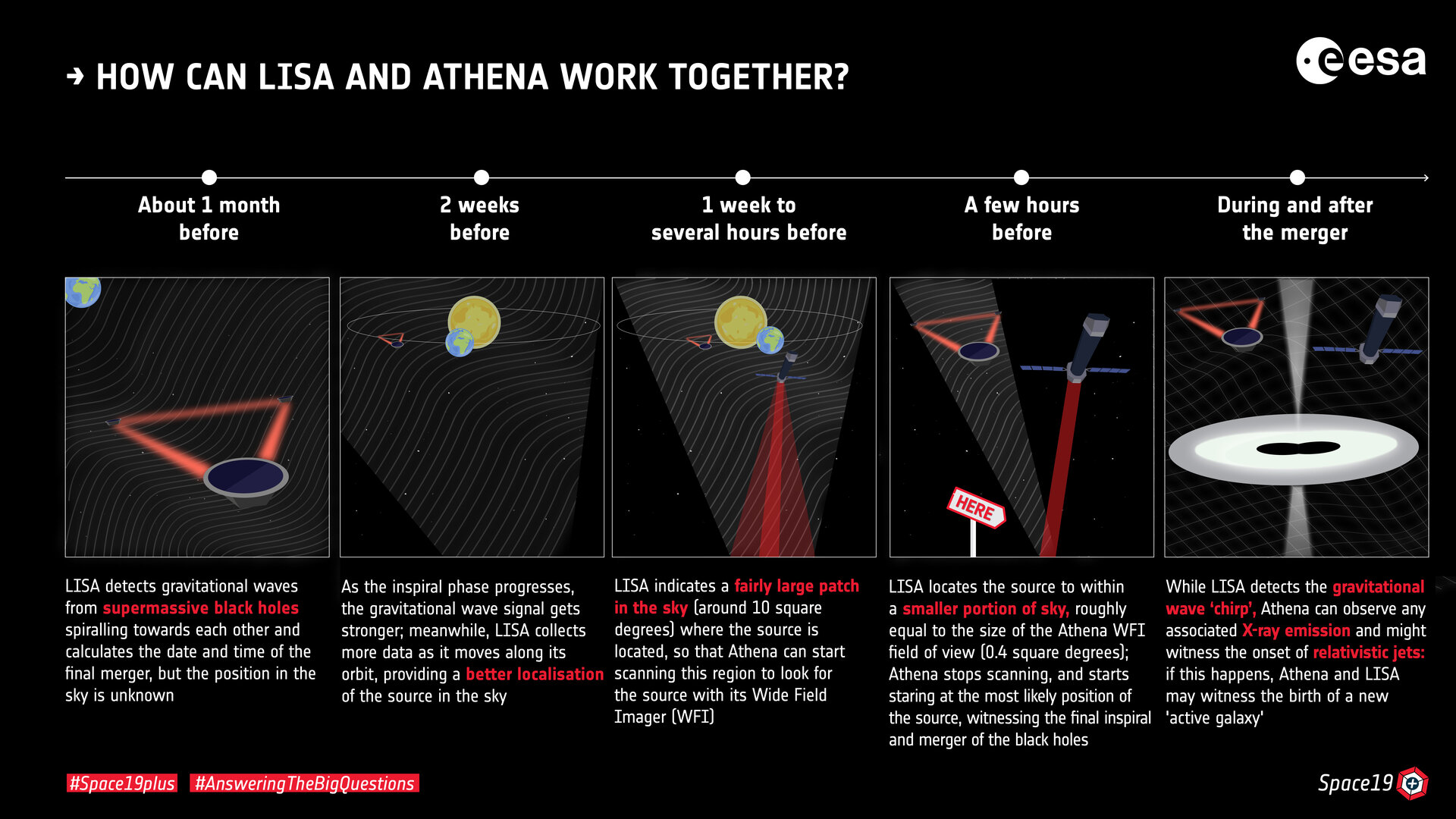 How can LISA and Athena work together?

What happens when two supermassive black holes collide? Combining the observing power of two future ESA missions, Athena and LISA, would allow us to study these cosmic clashes and their mysterious aftermath for the first time.

LISA will detect the gravitational waves emitted by the spiralling black holes about a month before their final coalescence, when they are still separated by a distance equivalent to several times their radii. Scientists expect that a fraction of the mergers found by LISA, especially those within distances of a few billion light years from us, will give rise to an X-ray signal that can be eventually seen by Athena.

Initially, we won’t know yet where exactly it’s coming from, but as the black holes inspiral towards each other, the amplitude of their gravitational wave signal increases. This, coupled with the motion of the satellites along their orbits, will allow LISA to gradually improve the localisation of the source in the sky, up until the time when the black holes finally merge.

A few days before the final phase of the merger, the gravitational wave data will constrain the position of the source to a patch on the sky measuring about 10 square degrees – roughly 50 times the area of the full Moon. This is still pretty large, but would allow Athena to start scanning the sky to search for an X-ray signal from this titanic clash. Simulations indicate that the two spiralling black holes modulate the motion of the surrounding gas, so it is likely that the X-ray signature will have a frequency commensurate to that of the gravitational wave signal.

Then, just a few hours before the final coalescence of the black holes, LISA can provide a much more precise indication in the sky, roughly the size of the field of view of Athena’s Wide Field Imager (WFI), so the X-ray observatory can directly point towards the source.

Catching the X-ray signal before the black holes become one will be very challenging, but scientists are pretty confident that we can make a detection during and after the merger. We could see the emergence of a new X-ray source, and perhaps witness the birth of an active galactic nucleus, with jets of high-energy particles being launched at close to the speed of light above and beyond the newly formed black hole.

We have never observed merging supermassive black holes – we do not yet have the facilities for such observations. First, we need LISA to detect the gravitational waves and tell us where to look in the sky; then we need Athena to observe it with high precision in X-rays to see how the mighty collision affects the gas surrounding the black holes. We can use theory and simulations to predict what might happen, but we need to combine these two great missions to find out.