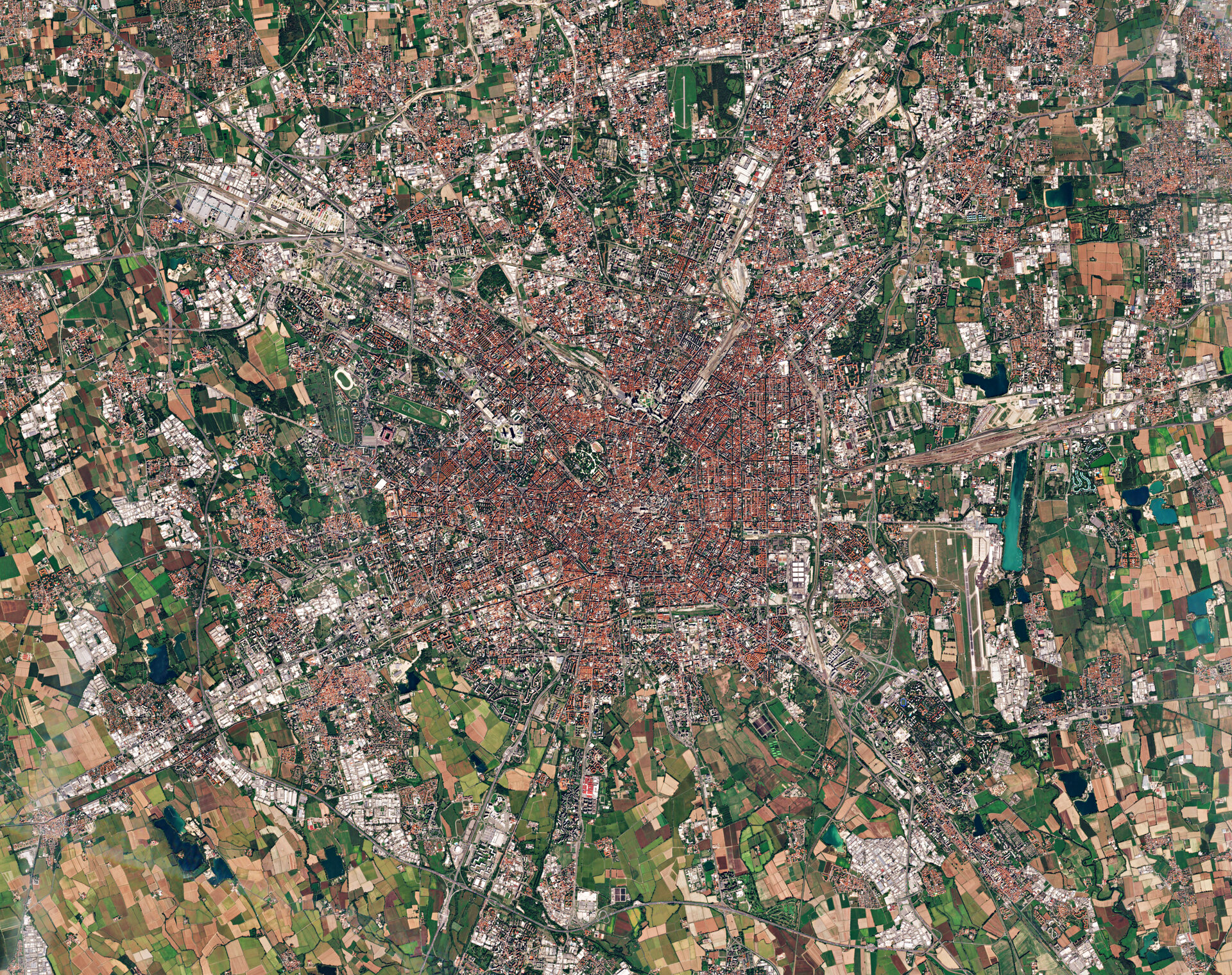 ESA's Living Planet Symposium – the largest Earth observation conference in the world –  is being held on 13–17 May in Milan, Italy. Held every three years, these symposia draw thousands of scientists and data users from around the world to discuss their latest findings on how satellites are taking the pulse of our planet.

Over 4000 participants will gather at the largest congress centre in Europe: the MiCo Convention Centre. With its iconic architecture, this modern building has become a landmark. The event will not only see scientists present their latest findings on Earth’s environment and climate derived from satellite data, but will also focus on Earth observation’s role in building a sustainable future and a resilient society.

In this high-resolution image, captured by Copernicus Sentinel-2 orbiting around 800 km above, the centre of Milan is clearly visible. The famous Milan Cathedral or Duomo di Milano with its surrounding square can be seen in the centre of the image. Taking six centuries to complete, it is one of the largest gothic cathedrals in the world.

Milan is the second biggest city in Italy and, like most large urban environments, it suffers from air pollution. While there is an effort to reduce the emission of pollutants, the city is also incorporating more vegetation into its development plans. This not only makes the environment more pleasant, but the plants also help soak up greenhouse gases such as carbon dioxide.

The Bosco Verticale, or the Vertical Forest, for example, aims to inspire the need for urban biodiversity. The two tower blocks have plants and trees planted on its façade, and are located just north of the historical centre. The vegetation covering both towers is equivalent to 20 000 sq m of forest and home to a variety of birds and butterflies. This vegetation absorbs approximately 30 tonnes of carbon dioxide per year.

Another example of the city’s efforts to ‘go green’, is the Biblioteca degli Alberi, or Library of Trees, visible next to the Bosco Verticale. With its geometric design and irregular patches of land, the gardens are home to over 100 000 plants and trees, interlinked with pedestrian and bike paths.

But it doesn’t stop there, the local government aims to plant another three million trees by 2030.

This image, also featured on the Earth from Space video programme, was captured on 24 September 2018 by the Copernicus Sentinel-2 mission. With its high-resolution optical camera, it can image up to 10 m ground resolution.

We are changing our natural world faster than at any other time in history. Understanding the intricacies of how Earth works as a system and the impact that human activity is having on natural processes are huge environmental challenges. Satellites are vital for taking the pulse of our planet, delivering the information we need to understand and monitor our precious world, and for making decisions to safeguard our future. Earth observation data is also key to a myriad of practical applications to improve everyday life and to boost economies.